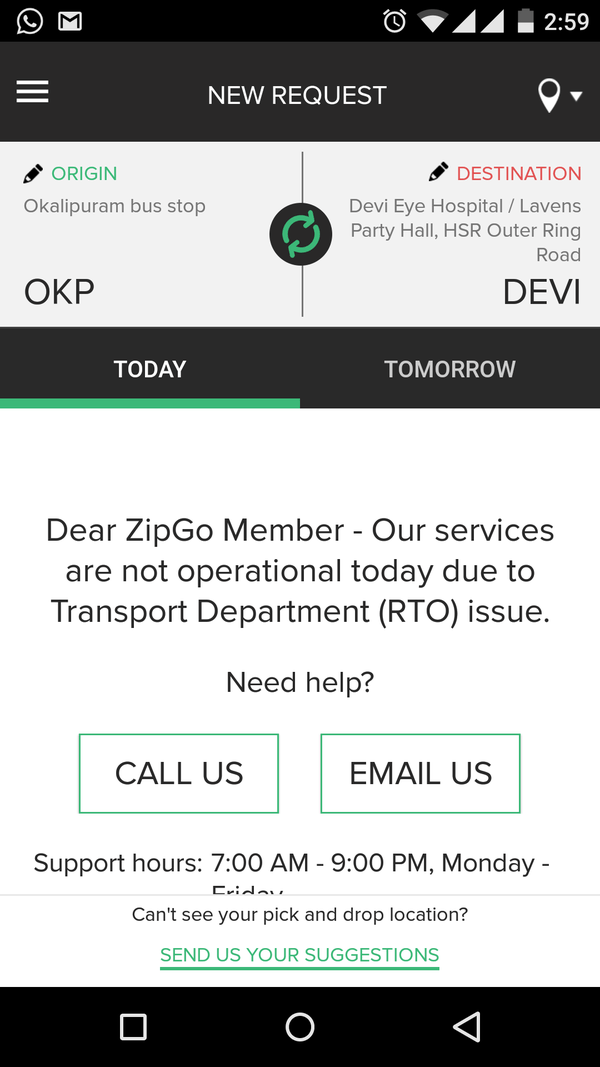 The ZipGo app says no services are operating at the moment.

On demand AC shuttle maxicab aggregator ZipGo has launched a change.org petition asking people to support its services, which have been suspended citing the lack of licence due to technical reasons.

Citizen Matters had earlier reported that the ZipGo has started plying its maxicabs in some routes. Through the ZipGo app, users could search for routes, book seats, pay beforehand, spot the location of the bus etc.

We had also reported that the Transport Department was not in favour of ZipGo’s operations, as the rules of the government do not permit the issuing of stage carriage licence to ZipGo. Stage carriage licences are given only t BMTC buses in Bengaluru, hence even the private buses operating on BMTC buses would be deemed illegal.

After a few days ZipGo offices were raided and the services suspended by the RTO and Transport Department.

ZipGo restarted the services after a while, arguing that since ZipGo doesn’t pick and drop people unless they’ve booked a ride and thus get into a contract with Zipgo, the rules of stage carriage permit don’t apply to ZipGo. However, the RTO has stopped the ZipGo again from operating airport services and other routes.

Ola Shuttle services launched in Bengaluru in mid-January that targeted the routes in IT corridors too have faced the wrath of the Transport Department.

However this is not the first time that a shuttle aggregator has faced such a situation. Ola Shuttle and Shuttl had to shut down their shuttle services in Gurgaon as the government found the same fault with their operations. ZipGo and other shuttle services had to deal with similar laws in Delhi too.

‘Transport Department wants us to shut down’

In the emotionally charged petition titled ‘Help ZipGo run’, ZipGo appeals to customers: Our government spends millions of dollars in promoting Make in India, Invest in India, Invest in Karnataka, Start-up India – Stand up India, etc. but there is no government support on the ground level for any innovation or new business initiative. Hence, it is only your encouragement that keep us going [sic].

“The Transport Department termed all of them “illegal”, raided their offices, seized and impounded their vehicles, confiscated office computers and laptops, and confiscated the devices issued by these companies to the vehicle drivers,” says the petition, likening the seizing of ZipGo maxicabs to earlier raids by the departments on private app-based car aggregators.

Along with the petition, ZipGo also sent a plea to its users, asking them to support the company in operating on-demand maxicabs in Bengaluru. ZipGo says they will send the responses to Karnataka Chief Minister and the Karnataka Transport Minister, as well as the Union Minister for Transport.

New Apartment Associations often face issues — from electrical to sewage treatment. This event brings best practices on taking over from a builder.

Bengaluru the new name fo Bangalore City is yet to be confirmed by the central government. Here’s the story on how Bangalore got its name and its evolution to Bengaluru.