A group of 60 students and young professionals in Bengaluru have just embarked on an experiential programme in public policy launched by Young Leaders for Active Citizenship (YLAC), an organization that seeks to create transformative learning experiences to equip young people with skills that enable them to lead change in society.

The programme cohort of 60 participants, selected from a pool of over 250 applicants from the city, is a diverse mix of lawyers, chartered accountants, artists, start-up evangelists, social sector professionals, and engineers who have had past educational stints in institutes such as IIMs, IITs, BITS Pilani, Azim Premji University, Christ University, Imperial College London, NIT, NUJS Kolkata among others. 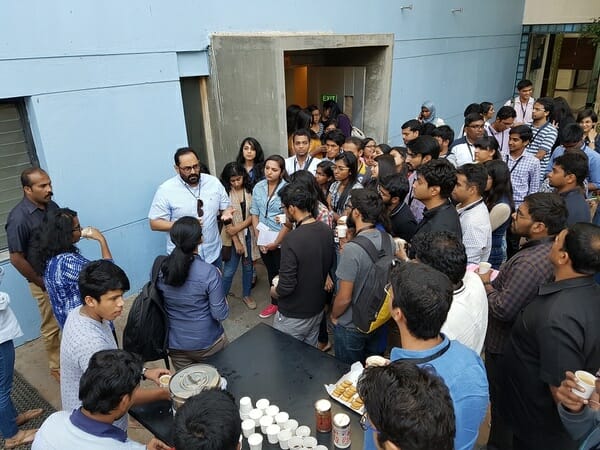 The Bengaluru cohort interacts with Rajeev Chandrasekhar, Member of Parliament, Rajya Sabha, at the opening session of the Policy in Action programme.

YLAC’s flagship ‘Policy in Action’ programme, launched in Bengaluru last weekend, will introduce the cohort to the building blocks of public policy, the interplay of economics and politics and how to build advocacy campaigns effectively.

The modules of the program have been designed by the founders of YLAC, Aparajita Bharti and Rohit Kumar, public policy graduates from Oxford and Harvard university respectively. They were closely guided by their board of advisors Dr. Shashi Tharoor (MP, Lok Sabha), Mr. Baijayant ‘Jay’ Panda (Lok Sabha) and Prof. Michael Walton (Harvard University).

The YLAC team works closely with the offices of these MPs to zero in on the projects offered to the participants. Teams of 4-5 members each are assigned to work on pressing policy issues for the participating Parliamentarians.

During the course of the programme, students will also interact with Rajeev Chandrasekhar, Member of Parliament, Rajya Sabha, an independent legislator from Bangalore.

The programme also places strong emphasis on educating students about the different career paths they can take if they want to remain in the policy and development space. Co-founder Aparajita Bharti feels that one of the ways of deepening democracy in India is to get young people to think critically about how society is shaped and equip them with tools to engage with institutions. “We are excited to see the enthusiasm for public policy in Bengaluru, a city which is primarily known for its love for technology,” she said at the launch.

“The wide range of policy topics that the students will be working on will equip them with the necessary skills to lead change for issues they feel passionate about,” added co-founder Rohit Kumar. He also shared that the project topics would range from electoral funding reforms to effectiveness of health policies to government interventions that could make Bengaluru a tourist hub.

Incidentally, this is the second edition of YLAC’s Policy in Action programme, the first being held Delhi in September-October 2016, in which 55 students had participated. Many of those participants have already started working directly with lawmakers or think tanks in varying capacities.

About Anjini Bist 1 Article
The author has not yet added any personal or biographical info to her or his author profile.

Katta Subramanya Naidu, BJP, won the 2008 Assembly elections from Hebbal by a margin of about 5000 votes. Read more about this former Minister, his assets, his involvement and conviction in the multi crore KIADB scam.

Three years ago when Sampath Ramanujam, Founder of Anvaya Foundation travelled to Kaiwara, along with his family, he met two girls who were playing happily with a fully damaged cycle with no bell, no brake