The two term MLA from Yelahanka is from BJP who had defeated four-time MLA B Prasanna of the Congress in 2008. Yelahanka is a hot spot for real estate development given its proximity to the Bangalore International Airport and that the National Highway passes through. He states himself to be a agriculturist.

Vishwanath lists agriculture and trading as sources of his income.

S R Vishwanath in the assembly

SR Vishwanath in the news

December 4, 2013: MLA SR Vishwanath asked the CM to finish remaining work on the flyover on Airport road, during a discussion on incomplete projects by BBM.

August 25, 2015: His wife Vani Vishwanath, who contested from Chowdeshwari ward, could not win the BBMP elections.

November 2, 2015: Janaagraha Centre for Citizenship and Democracy’s survey rated Yelahanka as one of the most livable constituencies in the city, two years in a row.The BJP leader said that good educational institutes, hospitals and booming real estate contributed to achieving the result.

December 29, 2015:The MLA participated in a protest along with troubled citizens opposing the closure of a 1.5 km stretch of road. connecting Gangamma Circle and MS Palya. He said that he has instructed air force officers to build an underpass to restrict vehicular movement into their premises.

July 5, 2016: Vishwanath spoke about the BDA site scam and explained the method by which scamsters cheat unsuspecting land owners.

July 21, 2017: He said the peripheral ring-road project was not well-received by farmers in spite of offering them Transferable Property Rights. They insisted on monetary compensation instead.

November 29, 2013: The High Court issued a notice to the police and state government to file a complaint against the MLA for drawing salary from both central and state governments. He was working as a mechanic in HAL, and was also a member of Bangalore Urban Zilla Panchayat.

December 10, 2015: Activists filed a complaint with the Lokayukta police alleging that land meant for public use was allotted to the Mythic Society. The top politicians mentioned in the complaint are BJP leaders D V Sadananda Gowda and MLA SR Vishwananth.

February 9, 2017: APMC President Srinivas Murthy was shot at 13 times when he was inside the car. The incident that occurred in Yelahanka is being blamed on the MLA. He denied all the allegations, and was prepared for interrogation.

June 23, 2017:  A breach of privilege complaint filed by the Yelahanka MLA against Anil Raju, editor of Yelahanka Voice, was discussed in the legislature. The speaker gave his approval to arrest the journalist.

How did Vishwanath spend his MLA LAD money?

Every year, an MLA is given Rs 2 crore to spend on developmental works in his constituency. He should allocate the funds for government, community, health and other infrastructural factors.

S.R. Vishwanathan has spent about Rs 9.43 crore for the development of his constituency in the last five years. The maximum expenditure by S. R. Vishwanath was for road improvement, totalled at Rs 5.07 crore. This was more than half the total expenditure by the MLA. As the constituency has rural areas, the road development seemed to have gained priority. Most road improvement works cost Rs 5 lakh, while a few entries showed expenses of Rs 2.5 lakh.

The next major expense was related to Education, for which the MLA spent Rs 1.02 crore, on works related to building anganwadis, schools and colleges. Most of the expenses ranged from Rs 2.5 lakh to Rs 5 lakh. There are 17 items that show the purchase of three-wheeled vehicles, each costing Rs 58,000.

The development of a temple as well as its prayer hall totals Rs 3 lakh. It is a religious expense that is not supposed to be part of an MLA’s expenditure, according to rule book.

Finally, there are items listed against names, most puzzling activities are the 17 items that have no explanation on the purpose, but just names against them. The expenditure for each is Rs 67,000/- 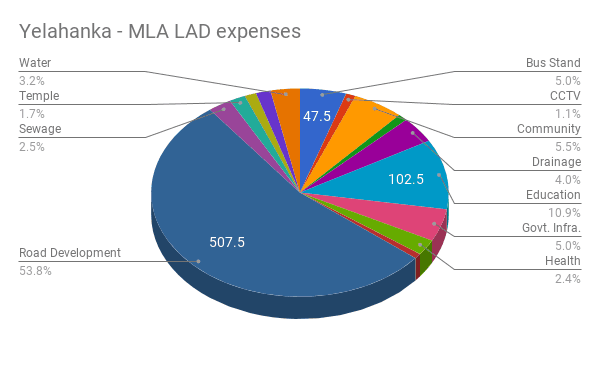 From the esoteric Strida, B-Twin, Merida, Trek to commonplace fitness and environment, SIBM-B students get enlightened.

The children of a Koramangala apartment complex had been falling sick often, and the cause seemed to be water contamination. The parent of one of the affected child asks that BWSSB set things right at the earliest.