Several years of efforts by Koramangala citizens bore fruit on Friday, 12-July-2013 when a Bhoomi Puja was held to mark the start of re-development work on Meistripalya Lake in Koramangala. 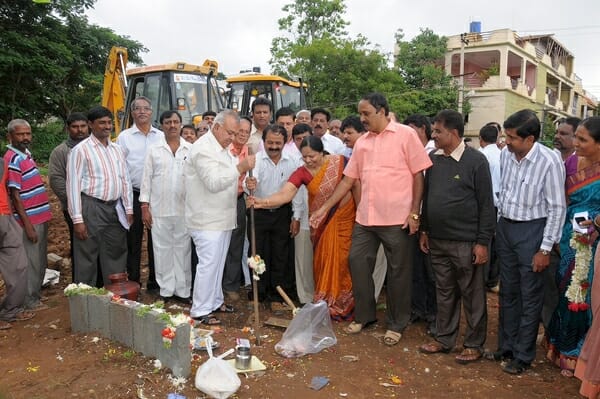 The work, estimated to cost Rs 175 lakhs, is based on a  Detailed Project Report (DPR), developed by the BDA and Lake Development Authority using inputs furnished by Koramangala citizens. Over the years, a number of elected representatives and officials have played a major role in bringing the project to fruition.

The 11 acre Mestripalya lake bed was embroiled in litigation between the BDA and a litigant who claimed ownership rights over it. In the early 80s the government had acquired vast tracts of land in Koramangala, including the Meistripalya Kere, that happened to be a public tank.  The lake itself was not ‘acquired’, in that sense, but the original owner claimed that the land was his, and went to court to reclaim it.

It was a group of active citizens of Koramangala who took the initiative to move the Supreme Court in the matter — it was a great victory for the citizens of Koramangala when the Supreme Court ruled in 2010 that the BDA would be the owner of the land and the land be protected as an open space and developed as a lake. The Laxman Rau Committee report of 1986 had already declared that the breached tank bed should be developed as a Forest area. 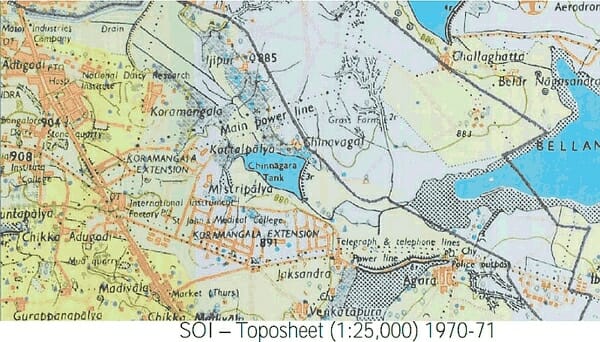 Meistripalya mentioned in the Survey of India topology map, 1970-71

After the legal victory, the role of the citizens did not end. A group of Koramangala residents got together a group of technical experts to make a detailed plan on how to rejuvenate the lake. The technical group included Dr. Harini Nagendra,  Urban Ecologist, Dr. S Subramanya, Entomologist & Ornithologist, Rohit Marol,  Landscape Architect, Ramesh Sivaram, Environmental Engineer, Manvel Alur, Environmental Specialist, Manjunath, Socio Economic Analyst, and Muralidhar Rao, Coordinator. They worked closely with the Lake Development Authority and BDA which brought out the final DPR.

Though the DPR was ready a year and a half ago, the execution could not proceed till now, as the land survey had to be first completed by the revenue department

Rajeev Chandrashekar, MP was instrumental in opening the doors of the bureaucracy in BDA and enabling a strong citizen participation in the technical, environmental and sociological aspects of the Mestrikere restoration project. Former BDA and BBMP commissioner, H Siddhiah also played a major role in easing the roadblocks to the project at different points of time.

With all the plans in place now, the lake should have sufficient water for 365 days in the year. Plans are also in place to build a waste water treatment plant to treat the sewage, build a tree arboreum and encourage a sunbird corner.

The Bhoomi Puja function was inaugurated by Ramalinga Reddy, Minister for Transportation, Government of Karnataka in the presence of Kokila Radhakrishna, Corporator, Ward 151, Nayak, BDA Engineer from BDA, and other officials from the BBMP, BWSSB and BDA.

Talking to the residents, Ramalinga Reddy promised that the development work would be completed in a timely manner. Nayak mentioned that they plan to complete work in 9 months.

Residents hope to see the work moving ahead in the next few months with BWSSB’s task being moving sewage lines, BDA’s responsibility for civil works and BBMP taking care of drains and water channels.

Guidelines are relaxed for government schools because, there may not be enough infrastructure to implement the rules. Why does this double standard exist?

People from various layouts who visited the Lok Adalat were in for a disappointment when they found that their cases won’t be heard.

The Supreme Court stopped the Governor from nominating an MLA from Anglo-Indian community. Why?