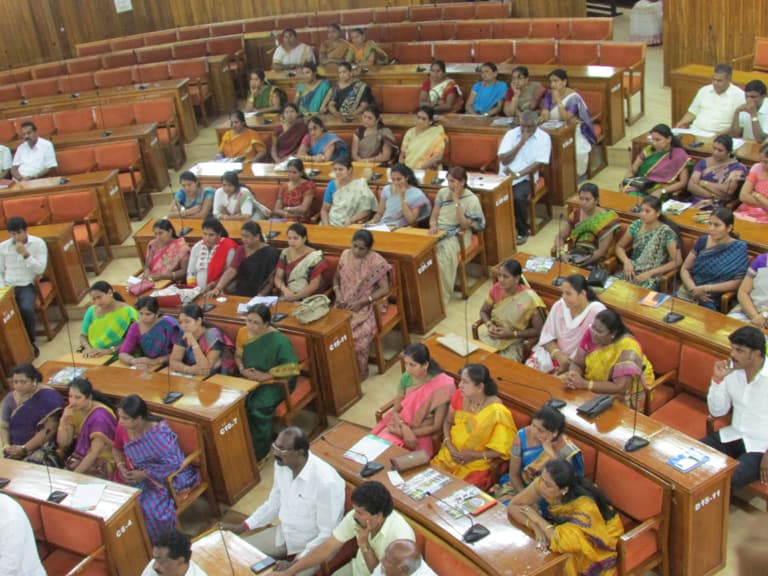 “As a teacher, I have always practised discipline, cleanliness and hygiene. This does not satisfy me enough, I want to render my service across Bengaluru. Hold the vision, trust the process.” These were the words of an aspiring corporator candidate who filled our Candidate Survey form, before BBMP elections. A B A-Tch graduate, she appeared to be a confident and strong woman in the candidate information form. The form was quite impressively filled.

Now she has won the election and is a corporator. With a hope to strike an interesting conversation with her about women corporators in BBMP, I rang her up. The phone number was given to us by BBMP, hence it must be her official number.

Women corporators have outnumbered men for the first time in the history of BBMP. Of the total 198 corporators, 101 are women and 97 are men. Thanks to 50 per cent women’s reservation, a large number of women were able to contest in the recently held civic polls and made it to the power corridor.

Women corporators have often been stereotyped as proxies for men in the family, who have won the election with the backing of their husband or father. We wanted to see if these stereotypes are real, and found that they were mostly real, indeed.

Will this team of women corporators perform independently? How well-versed are they in handling the affairs of their wards? Is being a corporator more challenging for women than men? Citizen Matters tried to find answers from women corporators themselves.

During the course, we came across a few outspoken and confident women as well as a few second time winners who still were not vocal about their aspirations. Sometimes our expectations turned turtle. Like for instance in the case of the above-mentioned teacher-turned-corporator or another police constable-turned-corporator. In both the cases it was their husband / father who picked the call.

I called up this corporator who quit her police job to enter politics. Her father picked up the call. Even as I began explaining to him about my intention, he went on praising his daughter. “She has 12 years of work experience in the police department and she has worked closely with the BJP for six years. This will help to prove her mettle. She will work independently and I will not interfere in her works,” he assured.

If that is the case, why not give her phone number for official purpose, instead of your number?, I asked. He replied, “We live under one roof. So people can call me and I will help them to address their problems. What is the need for calling her directly?”

Independent, to what extent?

“Yes, we are independent, at least many of us are,” asserts Gangambike Mallikarjun. This second-time corporator from Jayanagar ward agrees that it was indeed a bit challenging for her initially when she was elected as a corporator in 2010.

“For a woman corporator with willingness to learn and work, six months is sufficient to get the hang of administration. I used to refer to KMC Act book or interact with engineers for clearing doubts about administration. All we need is confidence and family support,” she adds.

So, for the confident and independent woman she is, does she take decisions related to the ward on her own or does she allow male members of her family to interfere in her work? “I take suggestions from them, but final decision is always mine,” she says.

Deputy Mayor Hemalatha Gopalaiah, who is the wife of JDS MLA Gopalaiah, too says that she will allow her husband to guide in her work. “Chief Minister guides the Mayor of Bengaluru, so what is wrong if my husband who happens to be an MLA tells me what is right and wrong. I will consider his opinion before taking decisions,” she affirms.

In fact, the opinion of almost all women corporators whom Citizen Matters spoke to was the same. They were okay with their husbands suggesting and guiding them. However, it’s not sure if this ‘guiding’ process also means taking decisions.

Bharathi Ramachandra, a first time corporator from Hongasandra ward, is okay with husbands calling the shots instead of wives. “We are not just corporators, but also are housewives. Hence, we may not be in a position to respond to citizens all the time. That is one of the reasons why many women corporators give their husbands’ phone number for public use. Husbands will take the call whenever we are unable to respond quickly,” she contends.

Irshaad Begum, second time corporator from Nagawara ward said that she and her husband will “work hand in hand.” “It was an unexpected and huge responsibility when I became corporator for the first time in 2010. So I was largely dependent on my husband. We used to work together for the ward,” she says. On asked how confident she is after five years of tenure, she says she is less hesitant now, but she will continue to take the help of her husband in addressing people’s problems.

Raising voice in the council

In a mostly male-dominated council, will the increased number bring a change? Yes, say the women corporators. “We might have been alleged to be proxy candidates, but when it comes to raising voice in the council can husbands talk on our behalf? No, right? I will definitely talk in the council whenever the need arises,” promises Ulsoor corporator Mamatha Saravana.

While agreeing that there is little scope for women corporators to raise their voice in the council, Gangambike Mallikarajuna emphasises the need for women corporators to make space for themselves. “Often the male corporators who occupy the first row grab the opportunity to speak and sideline the women. This should be stopped and equal opportunity should be given to all. I will make sure that I speak at the council if the officials fail to respond to the problems of our ward,” she says.

With majority of women corporators in the council, it is a good opportunity for them to bat for women’s issues. “We will certainly use the chance to address women’s safety issues. In the backdrop of increased number of women harassment and chain snatching cases, we have planned to install CCTV cameras in chosen areas of all wards,” says Deputy Mayor Hemalatha Gopalaiah.

Kaval Bhairasandra corporator Netra Narayan believes that making women financially independent is an urgent need. “I have already interacted with women in my ward and have asked them to form groups of 10 members each. These groups will be given vocational training, so that they can earn while at home,” she says.

“Apart from educating them on how to behave in the council and taking up ward-wise works, we will also give them advice on how to balance family and work. The society has not yet completely accepted giving power to women, hence we want to ensure that it does not result in family rifts,” he said. He also assured that women corporators from his party will give their own phone numbers and appear before public confidently in 2-3 months.

JD(S) City President Pratham Singh too said that they have plans to conduct workshop for first time corporators and they are waiting for the completion of the party office construction. “For the time being, I have decided to write to all the corporators about do’s and dont’s. I will specifically direct women corporators to share their personal numbers with public and also attend the work,” he said.

Venkatesh Kadagadkai, Director, State Institute for Urban Development, Mysuru which conducts training programmes for corporators, said that so far he has not received any request from the BBMP to conduct training. “After 2010 election, we had organised a three-day training for first time corporators as per their request. We are ready to train them even this time provided they ask for it,” he said.

The training module comprises of talks on KMC Act, Solid Waste Management, procedure for convening meetings, engineering test procedures for roads and transport etc. Apart from the common module for corporators, the Institute also has a separate module for women corporators which deals with issues of gender sensitivity, addressing grievances etc.

The table shows the number of women corporators elected from different political parties in the recent election.