That is the story of landfills that help Bengaluru live in peace. With the closure of Terra Firma waste processing unit in Doddaballapur, the garbage crisis has started worsening in Bengaluru. According to BBMP officials, the waste which used to be transported to Terra Firma, is now being diverted to various processing units and to a new quarry at Bettahalli in North Bengaluru.

“Around 500-600 tonnes of garbage used to be sent to Terra Firma before its closure last week. Now we are diverting it to other plants and landfills. However, the problem is that we are unable to open new landfills because of public protests,” says Sarfaraz Khan, Joint Commissioner for Health and Solid Waste Management.

Seegehalli and Kannahalli processing units which too were closed for some time following the agitation by villagers in the area have resumed the operation. Garbage is now being carried to the units with police security.

However, not all garbage reaches landfills or processing units. Some of it gets burnt indiscriminately, as seen in these pictures, contributing to air pollution in the city. 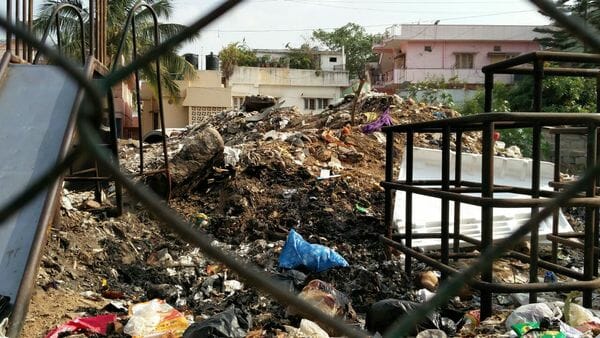 A park adjacent to Ejipura main road has been converted into a garbage burning yard. Pic: Shree DN 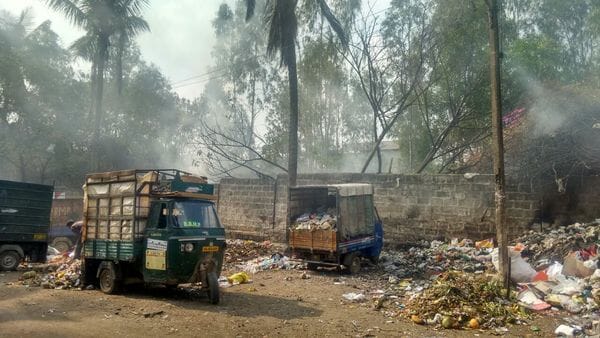 BBMP breaking its own promises

In the backdrop of closure of old landfills – Bingipura and Laxmipura – which were filled to their capacity, and the closure of Terra Firma, the BBMP has identified 10 quarries in different parts of the city.

BBMP claims to have taken measures to scientifically dump the waste in new landfills with the help of geo-membranes to prevent the leakage of leachate. However, identification of new quarries is in contrast to BBMP’s earlier promise of no more landfills around Bengaluru for dumping waste.

The BBMP which had even declared that the six new waste processing units — Seegehalli, Kannahalli, Doddabidirakallu, Lingaderanahalli, Subbarayanapalya and Chikkanagamangala — will only accept segregated waste, has backtracked from its promise. The units are processing mixed waste. And the reason: mounting garbage and failure in waste segregation.

Earlier in December, BBMP Special Commissioner for Solid Waste Management Subodh Yadav had ordered in a notice sent to joint commissioners of all zones that only segregated waste needs to be transported to all processing centres, and segregation awareness needs to be undertaken in all wards.

The plastic ban introduced by the state has reached the National Green Tribunal (NGT). The NGT has admitted three detailed petitions filed by plastic manufacturers across the state, asking that the state of Karnataka and KSPCB “shall not harass anyone except taking steps in the manner known to law.”

The next hearing is on April 19th 2016. The plastic manufacturers have also approached BBMP asking them to allow the manufacture and sale of the items that are not banned in the gazette notification.

Manjunath, a solid waste management contractor for wards 64 and 65 in Bengaluru, says that plastic ban will help the contractors a lot, especially in managing wet waste. People keep wet waste in plastic bags and tie them, which cannot be easily opened by the waste collectors. If this problem is avoided to a large extent, farmers will be ready to take pure wet waste. “Nobody wants mixed waste. Segregation at source will help SWM contractors to manage it better,” he feels.

Mahadev Gowda, the owner of Deemandala Farms near Dabaspet, agrees with Manjunath. He says that his farm has a composting unit that can handle 1000 tonnes of wet waste. Pure wet waste from the city residences can be taken by farmers, however the wet waste collected from BBMP is not fully segregated and not pure, hence farmers may not be interested to take it, he says. Plastic content in wet waste renders it ineligible for composting, he adds.

During a media tour to three waste processing units looked after by IL&FS – Seegehalli, Kannahalli and Doddabidirakllu – in last December, the manager of IL&FS had said that segregated wet and dry waste was accepted and processed separately at the plants.

When asked about this not happening in the waste processing units, Subodh Yadav says: “Those units were basically for processing mixed waste. We wanted to propagate waste segregation and process only wet waste in the new units. But segregation is not picking up yet. Therefore, mixed waste too is processed in the new plants.”

Commenting on the mounting pressure from residents near the waste processing plants to close them, he says there was no question of closing the plants. “Closure is not a solution. We will improve the functioning pattern of these plants by implementing odour controlling mechanisms,” he adds.

The Special Commissioner talks about implementing strict odour control in the plants processing mixed waste. However, the people residing near the infamous Karnataka Compost Development Corporation (KCDC) unit at Kudlu Gate near H S R Layout can vouch for the hollowness of such promises.

Bio-filter (odour control mechanism) which the BBMP had promised of installing at KCDC unit long back, is not in place yet. “We have been given deadline after deadline from the BBMP on implementing odour control system in KCDC plant. The last deadline we heard was on March 15th. But the system is not operational yet and we continue to suffer from the stench emanating from the plant,” says Anis Padela, a resident of Somasundara Palya lake. Anis had spearheaded a protest by HSR Layout residents in last November, asking for the closure of KCDC.

When asked about the issue, SWM Special Commissioner told Citizen Matters that the system will be in place by April 15. “Yes, bio-filter system had to be installed at KCDC by now. The contractor has unnecessarily delayed in installing the system,” Subodh Yadav said.

A fit case for contempt of court?

The heaps of mixed waste lying across Bengaluru and the burning of waste taking place across the city are a testimony to the failure of the system. Enforcing waste segregation has not worked well. Using penalty as a tool to prevent citizens from mixing the waste has also failed due to the faulty penalising system.

If you think segregation is the solution for the prblems, here is what you can do:

You can also write to the Chief Minister of Karnataka and the Urban Development Department suggesting methods to tackle waste without burning them or putting them in landfills.

High Court directives issued over a period of time, including the implementation of “no garbage on ground” policy, establishing wet waste processing stations in each ward and waste segregation at source, have not been followed. The High Court had even said that landfills are not a permanent solution, but the BBMP continues to hunt for landfills.

The petitioners are now waiting to move the court on yet another pertinent issue of landfills. “We have recently visited the quarries in Bingipura and Bettahalli to understand the landfill issues. Abandoned quarries around Bengaluru are actually a place of rainwater collection. This water is used by marginal farmers for non-drinking purpose. But, the BBMP, by unscientifically filling up these quarries with garbage, is spoiling the health and environment,” Ajesh noted.

Officials say that closing of Mavallipura unit is just a few days away, as there is no processing there on the scale required. In effect, with all these issues, right from waste segregation to collection to processing to dumpyard, how will BBMP stop another garbage fiasco from erupting? Only time will tell.

While everyone believed Bengaluru was out of the smart city race, the city has got a chance to vie for the tag by proposing area-based development. Citizen feedback has been solicited for the project.

An alarming rise in swine flu cases in February, sophisticated upgrades to tackle cyber crime and yet another instance of tree felling — catch your dose of weekly news from Bengaluru here.

Metro travel restricted on account of COVID-19, water quality in 129 houses tested, fresh clearances needed for Peripheral Ring Road project – catch up on news from the city over the past week, in our roundup.