United Technologies Corporation on December 19th today announced the 12 winners of India’s first ever Neighbourhood Improvement Partnership Challenge (NIP), an initiative of UTC’s Citizens for the City Program. The winning projects and support teams will collectively receive a total amount of nearly Rs one crore. The 12 winners will implement projects in the areas of mobility, waste management, public safety, autonomous building, water quality and rejuvenation of public spaces. 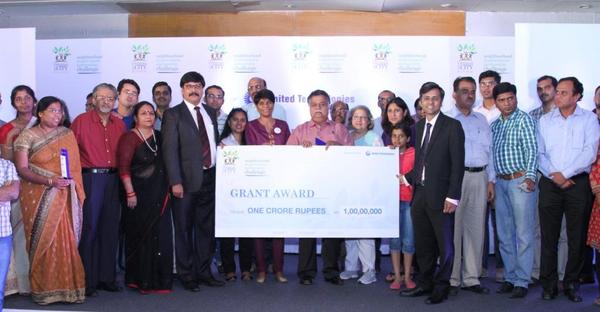 “Communities in Bengaluru have shown that they are willing to come forward and be solution-finders rather than mere critics of the challenges they are confronted with,” said Ashok Mirchandani, Managing Director, Carrier Transicold, Asia Pacific, United Technologies. “We hope that through our Citizens for the City campaign, we have sparked a movement that will see more neighbourhoods to come forward and find solutions to some of the most pressing urban challenges.”

Launched in May 2015, the challenge garnered 145 registrations and 86 proposals from across Bengaluru. Of these, 32 were shortlisted, followed by a selection panel who declared the 12 winners. Each of the 12 winners underwent a comprehensive review, and the projects that required building and zoning permissions were forwarded to the BBMP for approval. The winning projects will be completed within a span of six months.

A dedicated team from Centre for Public Problem Solving (CPPS) and WRI-India in conjunction with United Way of Bengaluru (UWBe), Bangalore Politcal Action Committee (B.PAC) and The PRactice spearheaded by the Neighbourhood Improvement Challenge, has been mentoring communities, establishing a support network for the participants, and creating a robust framework for execution of the winning projects in the city. CPPS and WRI-India will continue to work with communities and monitor the progress of the work until project completion, while UWBe will be responsible for fund disbursements to all relevant parties.

“Neighbourhood Improvement Partnership is an idea whose time has come, as has been proven by the response to the Challenge,” said Kalpana Kar, Founding Partner, CPPS. “The projects we have received break down complex urban problems to the neighbourhood level, with solutions that can be executed easily and replicated across the city. The biggest achievement for the NIP Challenge is that we have a framework today that involves citizens in urban problem solving, along with parastatals responsible for the City’s functioning,” she added.

Winners of the NIP Challenge

The project proposes to redesign an existing garbage transfer point (primary collection transfers to secondary) in the neighbourhood, to a clean and efficient garbage transfer station. The station spanning 1500 square feet, is expected to handle 500 kg daily waste from 1,000 households. The site design will include a leachate filtration system and follow the MSR rules of no-garbage-on-ground (nGOG).

The project looks at redesigning a dilapidated neighbourhood park to be disabled-friendly in order to make it an accessible, usable and a safe recreation space for 150 blind children and 250 to 300 visually impaired and orthopedically disabled visiting the centre. This is also intended to benefit other residents of Risaldar Street and VV Girl slum (50,000 population).

The project looks to conduct training sessions for personal safety of children for teachers, nurses and policemen in Madiwala. For the selected ward, the training sessions are proposed in a total of three schools, two anganwadis, 2 hospitals/ nursing homes/clinics/ health centres and one police station over three months.

The project looks to provide 23 cycle stands, as infrastructural support for cyclists in the neighbourhood as means to aid last mile connectivity and short trips within the neighbourhood. The stands are proposed at thirteen locations near markets and bus stops making up a circuit of approximately fifteen kilometres.

The project looks to pilot a manned kiosk at a bus stop – as a charging station, powered by solar energy to provide 24/7 ‘on demand’, easy to access, pay-per-use lighting and mobile charging services. The targeted users for this service are slums, street vendors and low income houses.

The project proposes to construct an underground zero electricity anaerobic STP with a processing capacity of 100 KLD to treat sewage flowing in the neighbourhood kaluve. Once treated, the water is to be released into rainwater harvesting percolation pits (to be built in residual area of the site), while the excess water is to be let out continuing downstream into a lake.

The project aims to redesign a road junction to reduce unnecessary traffic congestion and increase road safety with behavioural change through lane discipline. The proposal is to organise the existing U-turning based on scientific road standards accompanied with complementary road signage.

The project aims at providing well-designed street signage in the neighbourhood, for way finding and navigation. In addition to street names and orientation maps, it will also provide information with regard to civic services in the area such as spots for garbage collection, parking zones and surrounding amenities.

The project looks to provide 40 cycle stands, road safety signage and traffic calming interventions in the ward of Sanjaynagar to provide safe environments for cycling and walking, and increase the number of people doing so in the ward. In addition, it will also focus on behaviour change through awareness and outreach programs in schools, homes and Cycle Day events, as well as introduce traffic safety wardens.

The project looks to introduce as a pilot, 20 sensor-based LED lights in neighbourhood street streets, replacing high energy guzzling HPSV lamps. Since the HPSV lamps are often left on through the day, the intervention will also prevent the resulting loss of electricity from the same. This intervention is expected to result in savings of close to Rs 99,000 per year for BBMP.

About Citizens for the City

Citizens for the City is an initiative launched by United Technologies Corporation (UTC) to foster and support community engagement for sustainable urbanisation. The initiative, launched in Bengaluru, along with partners B.PAC, Centre for Public Problem Solving, WRI-India, The PRactice and United Way of Bengaluru is organised as a challenge between neighbourhood groups in different localities, to select and financially support proposals for civic improvement that are innovative and replicable. Citizens for the City is also a first-of-its-kind initiative in India, showcasing the potential of corporate social responsibility to tackle and overcome development challenges, and to promote an active sense of responsible citizenship through research, reports, competitions and other initiatives.

About Alok Dash 1 Article
The author has not yet added any personal or biographical info to her or his author profile.

Election Commission website plays PEEKABOO – site out of sight, not out of mind

You want to search for your name in the voter list, but the website doesn’t open. You won’t know where to search. Then the website redirects, or opens on its own.

Is a law required to punish the real culprits responsible for illegal constructions?

Laws exist on paper but they are not effective because of poor implementation by officials.