The creatures that share this city with us come in all sizes. For example, here’s a very common bird; you will find it in many gardens, especially among the flowers, because it drinks the nectar from them. Here’s the male Purple-rumped Sunbird. How colourful and beautiful it is, even though so extremely small! 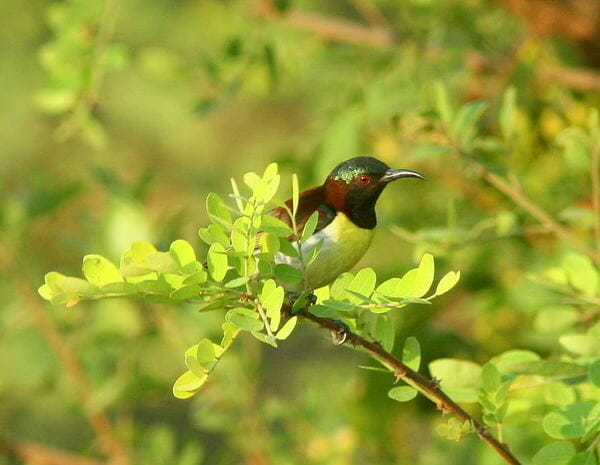 Among the largest birds very common in Bangalore skies is the Black (or Common) Kite. This raptor (bird of prey) has adjusted to life in the city, and has become a scavenger, finding things in the trash that humans generate. It was once called the Pariah Kite, but since ‘Pariah’ refers to what is assumed to be a ‘lower’ caste, it is now called the Black Kite, even though it’s brown all over!  In this photo, you can see that it still looks common compared to another special bird of Karnataka, the Long-billed Vulture.

The amazing thing, to me, is that both these birds, tiny and large, can so effortlessly take to the air, and leave the “surly bonds of earth” behind!  Flight and feathers unite two such very different creatures, that we can see around us in this city.

And talking about contrasts, these two birds that I have talked about, are so common in our city, while the Long-billed Vulture, featured in the second photograph, is extremely rare in our state. There are only about twelve or so birds, which have their roosts and a single breeding ground in Ramanagara (which is on the Bangalore-Mysore route). Naturalists are keen to protect this single breeding spot, and the area has been declared a Vulture Sanctuary.

The release function of “Art Etc”, a magazine on contemporary art and culture saw discussions on art market, venues for interactions between artistes and more.

Kids get to school faster with donated cycles

Little Shivaraj and Amar walked to school everyday for nearly 4 kms. Until one day they got a cycle as a gift, thanks to the Cycle-Recycle project.