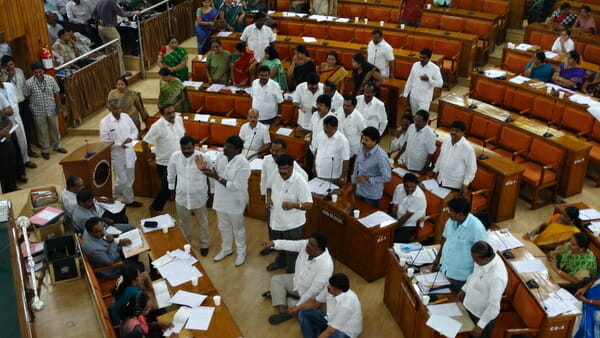 With less than two months for the BBMP council term to end and election season to commence, the one-man committee formed by the government to probe financial irregularities in the BBMP has submitted its report. The report has the potential to become a weapon for the State government to dissolve the BBMP council and postpone the election.

On February 19th 2015, Chief Minister Siddaramaiah had announced a one-man committee headed by IAS officer Rajendra Kumar Kataria to probe into various irregularities in the BBMP. The committee which investigated into the matter has now submitted its report to the government.

Speaking to Citizen Matters, Rajendra Kumar Kataria confirmed that the report was submitted to the government on the evening of March 5th 2015. “Though it has been submitted as an interim report, it can be considered as a final report as we have finished the entire probe and there is nothing to be done further,” he said, adding that the entire exercise was carried out in 15 days.

“The probe was conducted with the help of officials from the State accounts department. It was a kind of post-mortem on financial irregularities in solid waste management, sub-standard civil works etc,” he said. However, the officer refused to disclose details of the report. “It is something between me and the government,” he said.

Contents of the report have not been made public yet. Sources say that the report that has been kept confidential so far indicts the BBMP for financial misappropriation in accounts department, solid waste management, civil works and tax collection, and recommends further inquiry by an independent agency. Considering the time of forming the committee and the speed with which the committee has submitted the report, sources claim that the State government formed the committee to use it as a tool to supersede the BBMP council.

Dissolving BBMP the last weapon in the armour?

The government which is under pressure from the BBMP’s ruling party (BJP) and civic society to conduct the election on time has no other way to postpone the election but to dissolve the existing council.

Failing to perform duties can be reason for dissolution

Section 99 of the Karnataka Municipal Council Act gives power to the government to dissolve the corporation if in the opinion of the Government, the corporation is not competent to perform, or makes default in the performance of any of the duties imposed on it, exceeds or abuses its powers or fails to carry out the directions or orders given by Government to it under this Act or any other law, or is acting in a manner prejudicial to the interests of the corporation.

The Kataria report is believed to have given a solid reason for the government to dissolve the council for failing to perform its duties and for abusing power. Recently media reports, quoting a report by Technical Vigilance Cell under Commissioner (TVCC), pointed to a Rs 631 crore scam in garbage bill payment. Irregularities in garbage bill have been pointed out earlier by the audit reports by Comptroller Auditor General (CAG) too. BBMP even faced the court’s admonition for not making timely garbage bill payments.

However, when contacted, District-in-Charge Minister Ramalinga Reddy said that Kataria committee report had nothing to do with the election. “BBMP polls will be held on time. There will not be any delay,” he affirmed.

BBMP to issue tenders for cancelled garbage contracts
Govt will use BBMP division as an excuse to delay polls: CAF
BBMP division to be finalised by June 2015

Want to vote in the Bengaluru council polls? Enrol your name in the voters list before January 29th, if you haven’t already.