At a public consultation programme organised by BBMP to pool suggestions for making Bengaluru a smart city, two MLAs pitched in to promote their constituencies for the contest. While MLA of Malleshwaram constituency, C Ashwath Narayan came up with a proposal to make Malleswaram smart, Bommanahalli MLA Satish Reddy presented HSR Layout as the best place to be considered for Smart City project.

In the meeting where all the MLAs and MPs of Bengaluru were supposed to be present to bat for making Bengaluru Smart City, the turnout of elected representatives was extremely low. There were only two MLAs who made the presentation and MP P C Mohan who were present. A team of citizens from Yelahanka too addressed the gathering on behalf of their MLA S R Vishwanath. They came up with a 3-point strategy for developing Yelahanka as smart city.

Ever since the Central government announced consideration of 12 major cities for Smart City Mission on May 25th, including Bengaluru, the city which was till then nowhere in the picture to be a part of the Mission, has gained momentum. It can be recalled that last year the Karnataka government decided not to consider Bengaluru for competing in Smart City project, as it did not meet the basic criteria. Compared to other cities of Karnataka, Bengaluru had low tax collection, overly populated, and was the victim of improper financial audits.

Therefore, the State government gave no opportunity for Bengaluru to even take part in the contest. The government pitched in six municipal corporations – Davangere, Belagavi, Shivamogga, Hubli-Dharwad, Tumkur and Mangaluru – for the six slots allotted to the State. Of all the six cities that made their smart city presentations, Davangere and Belagavi made through the first round and were qualified to get the funds in the first year of the project. Though the remaining four cities did not get a chance to be selected in the first round, with the remaining four slots, they were bound to get the funds in the subsequent rounds.

But then, there came a twist. The Central government, during the end of May announced an opportunity for 12 additional cities to compete in the Smart Cities project. That is, 72 cities across the country will have to battle it out for the remaining 60 slots. With Bengaluru getting a chance to compete, now five cities are competing in the State to get selected for the available  four slots.

Unlike other cities, Bengaluru has little time to work for preparing the smart city proposal. In the recently held BBMP meeting, Mayor Manjunath Reddy said: “Bengaluru got just one month time to prepare for competing. Other four cities which had participated in the first round had their proposals ready, knew the loopholes in their proposals and had enough time to amend the plan. We have to do our best in the limited time.”

As Bengaluru is a big city and the available fund under Smart City mission is Rs 1,000 crore over a period of five years, the BBMP is supposed to select one part of Bengaluru for the project, instead of making a plan for the entire city.

The Central government’s website on smart cities says the project plan should include four components. The first one is retrofitting, i.e to introduce planning in an existing built-up area to achieve smart city objectives, to make the existing area more efficient and livable. The authorities should select an area exceeding 500 acres, in consultation with citizens. The MLAS of Malleswaram and Bommanahalli are batting for this. 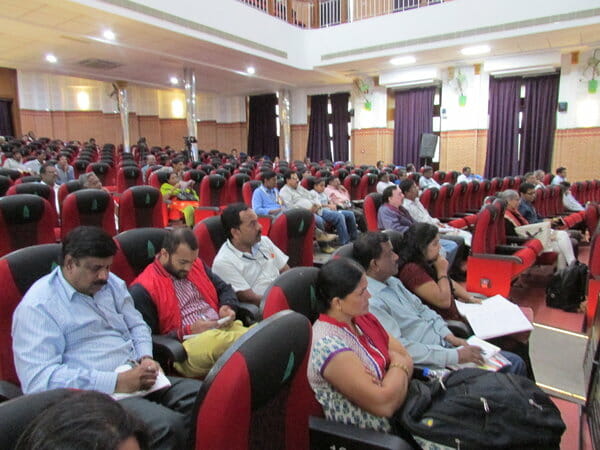 The second component is redevelopment – to replace the existing built-up environment and enable co-creation of a new layout. “Bhendi Bazar in Mumbai is a good example of redevelopment model,” says Dr Ravindra, former bureaucrat and Chairman of Smart Cities India Foundation. At Bhendi Bazar, the congested market area is developed into a modern living and workspace. Dr Muralidhar, Technical Advisor to the Mayor and Nodal Officer for Smart City Bengaluru says redeveloping the old markets of Bengaluru like Chickpet or Kalasipalyam is something to think about.

Developing greenfield is the third strategy. That is to introduce smart solutions in a previously vacant area (more than 250 acre) through innovating planning, plan financing and implementation tools. In a congested city like Bengaluru, is there an unused space of more than 250 acre is the question.

What is a Smart City?

The Union Ministry of Urban Development Department launched Smart City Mission last year. The project intends to develop 100 cities in the country, with better infrastructure, and give a decent quality of life to its citizens, a clean and sustainable environment and ‘smart’ solutions. The Smart City website says “to create a replicable model which will act like a lighthouse to other aspiring cities.”

The Central and State governments together will allocate Rs 1,000 crore to each city over a period of five years. The Centre has allocated number of slots for each state. Karnataka is eligible to develop six cities of which two cities have been already selected in the first round. Five cities are vying for the remaining four slots, including Bengaluru. If at all Bengaluru fails to clear this time, it will have another opportunity to compete in the last round of selection in December.

Give your suggestions before June 27th

June 27th is the last date for citizens to give the suggestions for making a part of Bengaluru, a smart city. Nodal Officer Dr Muralidhar told Citizen Matters that public can give suggestions through following methods:

There seems to be lukewarm response to the smart city initiative in Bengaluru. It was reflected in the public consultation meeting held at Town Hall on Thursday. The citizens participation was low and even those who wished to speak, did not get a chance to. While, what is expected from citizens is to give precise suggestions to the problems, what people came up with was pointing out the issues in Bengaluru. One citizen, went to the extent of appreciating Prime Minister Modi and his governance, instead of giving specific suggestion.

The Facebook page has 800 and odd likes, and mygov website has received some 260 submissions. Yet, the BBMP has made tall claims. “We have received over 5 lakh submissions which we are sorting out using a software. Workable suggestions will be added in the proposal prepared by consultant Nisapana. They are the same consultants who worked on smart city proposal for Davangere. So far there has been lot of push from the elected representatives and citizens from Malleswaram and Gandhi Bazaar to consider those areas for the project,” Dr Muralidhar said.

Amidst BBMP putting its effort to make it to the league of smart cities, a few citizens have raised their voice against the project as well as the way in which BBMP is organising public consultation programmes.

Kshitij Urs, Professor at National Law School, Bengaluru, says it’s a sham to call 100 people in Town Hall and call it a public consultation. “The 74th Amendment to the Constitution emphasises on people’s participation in governance. But the Smart City project is in contrary to the aspirations of the Constitution. Special Purpose Vehicle formed to plan and execute things under the project, does not include elected representatives who are the voice of people.”

Urs explained how dangerous and undemocratic can this become. “When public consultation was held in Belgaum, a builder said the slum-dwellers will be vacated to redevelop the area into multi-storied building. But after visiting the slum which has been proposed to re-developed, we realised that they were not consulted before taking the decision,” Urs observed.

Muralidhar Rao, an activist from Praja Raag – an advocacy forum, too has taken a dig at the BBMP for organising consultation programmes as mere eye-wash. “Now, searching for where to send my suggestions to, over the net, I am unable to find any link to any “smart city” programme, either on the BBMP site or the GoK site,” Rao writes in his blog.

Further, he says, “actually, if the government genuinely wanted suggestions from the public, there are so many of them being made on a daily basis over the ever-proliferating social media platforms in the city, including on Praja. I can make a fresh set too. But, where do I send it? And, even if I send it, will it be considered at all? Leave alone that – will it even be acknowledged? Past experiences haven’t exactly been encouraging, to say the least.

Join the ‘Save Bangalore’ bandwagon

Over a glass of complimentary lemonade, they struck conversations with Bangaloreans about various issues such as cyclist and pedestrian rights, dwindling public spaces and reducing greenery.