The Government of Karnataka has issued the notification outlining the formation of Metropolitan Planning Committee (MPC). The long-awaited step has been taken very secretively, with no publicity to this anywhere. Not even the Urban Development Department website has displayed it; nowhere has it been kept for public discussion.

The draft notification has been gazetted and published on November 7, 2013, with 15 days for public feedback on the issue – that is on or before November 22, 2013.

Problems MPC is supposed to solve

Right now Bangalore has too many planning authorities that sanction approvals and plan the land use. Bangalore’s Local Planning Area is conceptually organised into three main rings for consideration of zoning and regulations. 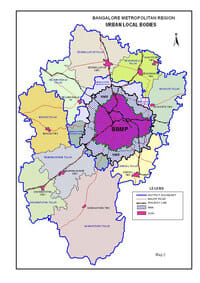 The inner core is the BBMP area, which has expanded recently, with the inclusion of 110 surrounding villages. This is surrounded by a thin strip which falls under the BDA. This BDA limit is encircled by the BMRDA. The BMRDA, through its five Town Planning Authorities ( Nelamangala, Kanakapura, Magadi, Anekal and Hoskote), is the plan sanctioning authority for all properties falling in the third section.

Again, there is BIAPA that looks into the airport area development, which includes parts of Bangalore North, Devanahalli and Doddaballapur. It has similar  powers as the BMRDA and is a plan sanction authority only for land use around the airport.

There are also the essential services which are also called as ‘para-statals’ – BWSSB, BMRCL, BMTC etc, which have their own power in planning for the city.

The lack of coordination between these results in disparities and contradictions in the governance structure. The Metropolitan Planning Committee will have representatives from all the above regions / limits, and is supposed to bring in harmony among all of them and coordinate between them.

This effectively means that the power of BDA, BMRDA, BBMP, Gram Panchayats and the para-statals will be reduced.

What is Metropolitan Planning Committee?

Among these, in case of the Committee for Metropolitan planning.-

(2)  The  Legislature  of  a State may, by law, make provision with respect to-

(a) the composition of the Metropolitan Planning Committees;

(b) the manner in which the seats in such Committees shall be filled:

Provided  that  not  less  than two-thirds of  the  members  of  such Committee  shall be elected by, and from amongst, the elected  members of  the  Municipalities  and  Chairpersons of the  Panchayats   in  the
Metropolitan area in proportion to the ratio between the population of the Municipalities and of the Panchayats in that area;

(c)  the representation in such Committees of the Government of  India and  the  Government  of  the  State and  of  such   organisations  and institutions as may be deemed necessary for carrying out the functions
assigned to such Committees;

(d)  the  functions  relating  to planning and  coordination  for  the Metropolitan area which may be assigned to such Committees;

(e)  the manner in which the Chairpersons of such Committees shall  be chosen.

(3)  Every  Metropolitan  Planning Committee shall, in  preparing  the draft development plan,-

(i) the plans prepared by the Municipalities and the Panchayats in the Metropolitan area;

(ii)  matters  of common interest between the Municipalities  and  the Panchayats, including co-ordinated  spatial planning  of the area, sharing of water and  other physical and natural resources, the integrated development of infrastructure and environmental conservation;

(b)  consult such institutions and organisations as the Governor may, by order, specify.

(4)  The  Chairperson of every Metropolitan Planning  Committee  shall forward the development plan, as recommended by such Committee, to the Government of the State.

(Click here for reference, and search for the text 243ZE, to see the ful text).

What pushed the MPC?

There are many states which haven’t formed Metropolitan Planning Commission yet. In Bangalore, citizens have been pushing for this to happen, for a long time now. C N Kumar, who is a well-known RTI activist and concerned citizen, had filed a PIL in 2005. (WP 21436/2005- C N Kumar V/s BDA and State of Karnataka.)

The petition aimed to stop the indiscriminate change of land use being granted in Bangalore under Section 14 A of Karnataka Town and Country Planning Act – especially from residential to commercial. The Government of Karnataka reacted to this on January 9, 2013, by saying that it is in the process of constitution of Metropolitan Planning Committee.

The gazette notification on Metropolitan Planning Committee is perceived as a result of constant pressure by the court and citizens on the government.

It also recommended that MPC should have a ‘review function’ in regard to the town plans prepared by the BBMP, other Urban Local Bodies (ULBs), and sectoral plans prepared by other statutory bodies. The power which then vested with the BMRDA needs to go to the MPC, the report advocated. In a nutshell, the report recommended that the powers of BBMB, BDA and other ULBs efectively be curbed and MPC be vested with the power to monitor the overall development of the region.

ABIDe Task Force, formed under Yeddyurappa Government, drafted a bill – Bangalore Regional Governance Act, 2009. A meeting held in February 2011 by the then- Urban Development and Law Minister Minister Suresh Kumar to discuss this bill did not see the participation of MLAs and corporators of Bangalore.

However, now the Government has come up with a notification that will be finalised after November 22, 2013.

What does the new draft comprise?

C N Kumar, the RTI activist, has the following feedback on the draft:

On the notification being not publicised much by the department, C N Kumar says that they have complied with law by publishing it in the gazette. “This is obviously a way to follow law but not process by giving it wide publicity. It is not even on the UDD website that is  a requirement under the RTI Act – suo motu declaration Sec 4 (1) a and b,” he observes.

The notification has not been made public while calling for objections, and the public has had very less chance for even knowing about the notification. The notification is available on Gazette, but not on Urban Development Department website.

The official closing date for accepting objections and feedback from the public is November 22, 2013. Concerned citizens can mail the objections / feedback to the Urban Development Department to bdaudd@gmail.com.

Citizen Matters will continue to track the story and get more opinions on the notification.

On the 8th, 9th and 10th October 2008, Dramanon, a young and talented Bangalore theatre group, are staging their new play (or rather, three-plays-in-one), titled “Alarms and Excursions” at Ranga Shankara.

How will you celebrate the joy of giving this year?

It is in giving that we receive the most, say the wise. As Bengaluru joins the country in celebrating DaanUtsav 2016, here’s a list of opportunities for you to experience that joy!

Reformist IFS officer Brijesh Kumar counters the BBMP’s allegations of not doing enough to green the city, indicating that the Mayor and Commissioner are passing the buck to him, while they are actually responsible for cutting and planting saplings in Bengaluru.