What do you generally do when it rains? Curl up on a chair with your favourite book and watch the tiny droplets trickle down the window? Or are you fighting a battle to not reach into your pocket to find that lighter to light a cigarette?

Well, if you’re the second kind, we’re here to tell you why you should kick the butt for good this World No Tobacco Day.

So why do people pick up the habit, even though there are aware of the risks and consequences? Experimenting, peer pressure, the ‘cool’ factor – these are some of the reasons why youngsters start smoking. Many of them assume that they will be easily able to stop smoking when they want. The sad reality is that cigarettes contain nicotine, and nicotine is addictive and keeps them coming back. Adults, on the other may have picked up the habit when they are younger, but have a litany of excuses to continue do so – work and family pressures, have tried but failed, it feels good after a meal…

Shankar (name changed on request), a 76-year-old who has been smoking for over fifty years, says, “It keeps me calm. If I don’t smoke, I can’t control my temper, and I end up yelling at people around me. It’s become a habit now. Nicotine chewing and electric cigarettes were not of much help to me.”

Whatever your excuse, here are some reasons why it’s high time your pack bites the dust.

I should stop smoking? Why?

Here’s the typically stuff you’ve probably already heard and see on the packs too – it causes many forms of cancer; increased carbon monoxide levels in the blood cause heart and lung diseases; they damage your nervous system and hence the brain.

It could increase your chances of contracting Alzheimer’s disease. Amongst youngsters, it may increase the risk of depression.

Nicotine in the blood reduces one’s appetite. Dr Ritika Kalra, a nutritionist at Qua Nutrition says, “Nicotine acts as an appetite suppressor. It reduces the capacity to smell and hence taste. Smoking also reduces the levels of calcium, Vitamin D and Vitamin C in the body, which can lead to various deficiencies. With deficiencies knocking at the door, the diseases due to them aren’t far behind.” 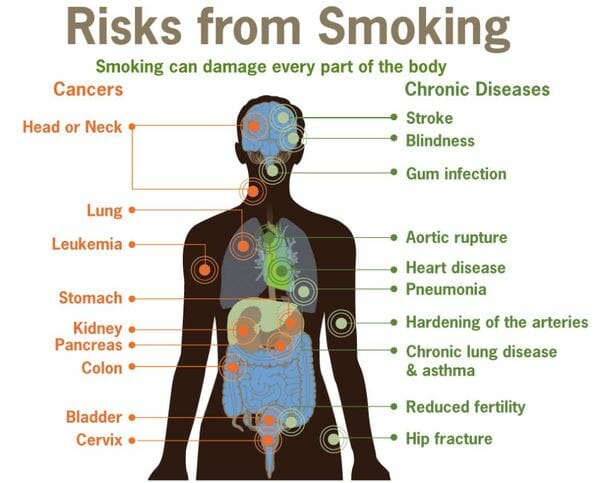 Some of the risks from smoking cigarettes. Pic: By CDC [Public domain], via Wikimedia Commons

And it’s not just harmful for smokers. It is bad for those around you too, the non-smokers who think they are safe from them. If you are smoking around them, they certainly aren’t. The second-hand smoke that they inhale from your cigarette, puts them at risk for lung cancer and respiratory disorders.

If you are smoking around children, it’s even worse – respiratory infections like bronchitis and pneumonia, increased risk of wheezing and breathlessness, slower lung growth – these are only some of the diseases that children are susceptible to.

If that isn’t enough to scare you, think of the money you can save by quitting. On average, a pack of ten cigarettes costs about Rs 100 and Rs 125. If you smoke ten cigarettes a day, you are also spending anywhere between Rs 100 to 125 daily. That amounts to Rs 3,000 to 3,750 in a month, or about Rs 36,000 to 45000 every year! This money could be instead put aside for a rainy day, or a vacation, or maybe a gift for someone you love, or perhaps a health insurance policy.

For many people, it is the thought of not doing something that they are used to, that scares them. Dhanya KM, a 30-year-old reporter who has been smoking for over 10 years, says, “I really want to quit. I know of the dangers. I know that my quality of life will improve after I stop smoking. But I really can’t imagine how. My only comfort is that I know I will, someday…”

There are many apps, which can easily be downloaded from the Playstore or iTunes like Quit Smoking, Smoke Free, Quit Now that help quitters track their progress.

Rahul (name changed on request), a 22-year-old, who managed  to quit smoking after two years, says,

“I have images of the worst effects of smoking on my phone. Every time I have the urge to smoke, I look at them. I also have an app that tracks how much money I save every time I decide not to smoke; that helps too.”

“I used to smoke a couple of packs every day, but I’ve cut down to five or six cigarettes now”, says Saina (name changed on request) a 19-year-old college student.  “The commercials on television worked wonders for me. I was absolutely disgusted”.

“I came across a poster which had a man’s face that looked partially decayed. It said that 75% of the people would stop smoking if smoking did this to their physical appearance instead of their lungs. Everytime I touch a cigarette, these words play in my mind and makes me reduce smoking” she adds.

Munching on these, could help curb the craving

There are some foods that could help curb the craving. “I would recommend grapefruit,” says Dr Ritika, “Amla, kiwi, papaya and broccoli  can also help curb the need to smoke”. She adds, “The body requires about 2000 grams of Vitamin C. So quitters should concentrate on a diet rich in vitamins. If you’re not big on eating fruits and green vegetables, Vitamin C supplements are a must!”

If you are making an effort to quit, then just munching on fruits and green veggies can’t make the difference. “Coffee, alcohol, and meat are a big no-no,” says Dr Ritika. “Since oil promotes smoking, a high fat diet and junk food are things to stay away from. So it’s best sticking to mint and chewing gums if you are looking for supplements.

If you’ve made up your mind to kick the butt, go ahead and stay away from your friends who smoke. Passive smoking can do as much harm to an individual as it does to a smoke. “Company definitely matters when you’re trying to quit smoking. If you can’t stay away from smokers, then it’s best to get them to quit as well,” suggests the doctor.

She adds that yoga, especially pranayama, if practised regularly can help speed up the body’s rate of curing itself with respect to respiratory problems, improves blood circulation and energising the nervous system.

If you are looking to quit smoking, reducing your cigarette intake, switching to nicotine gum or e-cigarettes are a good start. However, these are only short term solutions, and the chances of staying away from cigarettes are slim.

Going cold turkey is probably the best way. Have a plan, track your progress, and keep tabs on the money you save. Inform your friends and family of your decision to stop smoking, they will help keep you in check. Say no to friends and colleagues when they ask you to join them for a smoke break. Avoid social gatherings if you think they will tempt you. All this, combined with your resolve could help you on your way to kick the butt!

How to revive your neighbourhood lake

Here are 16 steps to saving your neighbourhood lake – join the movement to make Bangalore the “City of Lakes” that it once was.

All you need to know about Bengaluru’s Employment Exchanges

This guide will help you figure out how anyone can benefit from employment exchanges.