Would we choke off our lungs to “develop” ourselves? Certainly, in Bengaluru, we seem to be doing so. One lung is our green spaces, and the other is our lakes. Both are under threat and have shrunk so much in the past few decades that the quality of life in our city has been seriously impaired.

Let’s leave trees and greenery aside for a minute, and concentrate on our lakes (or lack of them). From about 1,790 + lakes, we seem to be down to a hundred, and the greed of real estate sharks (fuelled by the very real need for housing) has ensured that many lakes follow a vicious spiral to perdition: first, trash and construction material is dumped into them, as well as sewage and sometimes sullage; then, covert action is taken to acquire the land around it. Then, construction of apartment buildings begins, and often, these buildings sound the death knell of the very water body they are supposed to have a view of, by blocking the water inflow or the recharge areas of the kere .

The old system of keres in Bengaluru, many of them dug by Kempe Gowda, was a well-monitored and thought-out system of water bodies, interconnected and comprising a whole. The raja kaluves ensured that during monsoons and other rains, the ground water, as well as the lakes, were replenished.

“Development”, especially the rampant construction and escalating real estate prices after the IT boom, ensured that this system broke down. Even in the late 60’s, planners without vision built upon the lake beds. Dharmabuddhi kere, once a very large lake, is now Majestic Bus Stand, and one of the most congested areas of Bengaluru today! The destruction of our lakes has been very steady.

Here is a video that  explains the issues in a short, easy-to-understand way:

I am not knowledgeable enough about the history of Bengaluru, or the environmental issues involved, to be able to make authoritative statements. But as an avid naturalist, I see the deterioration on so many fronts, as our lakes dwindle and vanish… in terms of water replenishment, urban wildlife, plant species, microclimate… the list is a long one.

I do not propose to evangelise too much here… But I just ask each one of you – if you, or any of your friends, wants to invest in an apartment building that promises a “lake view”, do find out if the builders are building on the catchment area of the lake. Puttenahalli kere in Arekere is a prime example. All the efforts of a dedicated team of volunteers are being frustrated by the fact that the catchment area of the lake cannot bring in water any more. 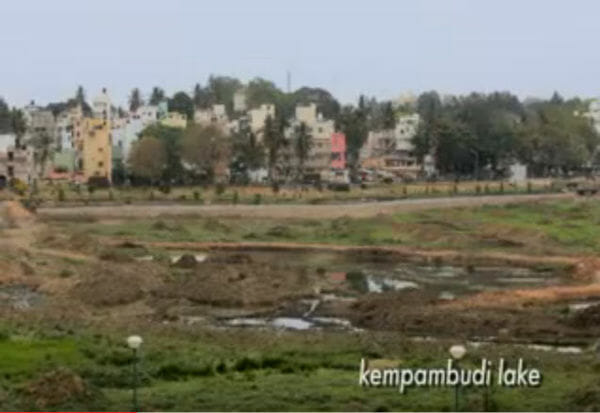 Constructions galore at the periphery of Kempambudhi kere. Screengrab from the video.

Let us try to learn from the successful rejuvenation of Kaikondrahalli kere (alas, the threat seems to continue), and take heed of the terrible sight of Bellandur kere, and try to actively preserve our water bodies before they vanish and leave our once-green and beautiful city sterile and wasted.

Fencing off the Byrasandra lake has started at last.

The Karnataka Slum Janara Sanghatanegala Okkoota has called for a public hearing at Gandhi Bhavan to discuss highlight the socio-economic and cultural impact of slum evictions.

The now dry Hesarghatta lake in the outskirts of Bangalore, which has supplied water to the city for over a century, is a mute victim of environmental ravages. See our slide show.