District Lions Service Foundation (DLSF-317 A) has built a ‘Lions Centennial Clock Tower to commemorate successful completion of 100 years of service to mankind. The Lions Centennial Clock Tower is built at RBI Layout play ground, Phase 7, JP Nagar. The centennial clock tower comprises of a large clock with an hourly chime, bust of legendary Lions founder Lion Melvin Jones and large Lions logo which stood as a common identity for Lions over the last 100 years. It was inaugurated on 30th June 2017, by M Krishnappa, MLA , Bangalore South Constituency in the presence of Shashi Rekha Jayaram, Corporator, Ward No.195 along with DLSF Chairman, Lions District Governor, and other Lion dignitaries.

Lions Club which is known for its service to society, should not have wasted money on this project.  Memorials on public property need to serve public utility. A memorial for Major Unnikrishnan was put in ISRO Layout by its residents and that memorial made sense as it is a mark of respect and gratitude for someone who gave his life for us. We residents spent money on a drinking water RO system in the senior citizen park of RBI Layout. If Lions Club had put a drinking water facility on the main ground it would have been very helpful.

RBI Layout ground is public space no doubt, but our elders spent their hard earned money to develop this land. No layout nearby has as much vacant space as we do. Nobody has the right to misuse the land. Ground is meant for sports, and all other activities not related to sports should be avoided as much as possible. I have no disrespect to the people of Lions Club and its leaders, but we feel very sad for our ground, funds and the energy of people that is misled and misused. I hope at least in the future nobody will treat RBI Layout ground as an orphan to put and do anything there. 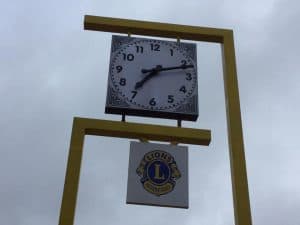 I request that Lions Club, who is well known for their social service, not get diverted in these sort of activities. If they need a memorial the should make it in their own premises. Or they can have a different type of memorial on public property which serves the public utility. However, I am not for the removal of this clock tower now as it will again be a big waste of resources. We need CCTV, we need Swachh Bengaluru etc., we need to prioritise our energy.

About Bellur Laxminarayana 1 Article
Bellur Laxminarayana is an ex-service man, former trade union leader, former Kannada Chaluvali activist, former general secretary of the RBI Welfare Association and committee member of the JP Nagar Federation. He is currently concentrating of Kashmir Cause, supporting One India Strong India and the revival of Chunchaghatta Lake. Bellur is also a committee member for the senior citizen association of JP Nagar 7th phase.

Opinion: How BMTC bus services can be cheap, clean and safe during COVID

While BMTC needs to adopt short-term measures like plexiglass partitions and simpler fare structures, it should also evolve long-term measures for safe travel.

Vijayanagara Vaibhava to be recreated on streets of Bengaluru

250 Metro viaducts will be painted like the pillars in Hampi, and Metro boulevards will be adorned with replicas of stone monuments, in Bengaluru.

Pourakarmikas demanded regularisation of all 18,000 workers, at a protest today. BBMP’s current regularisation process excludes genuine workers based on age, educational qualification, and the requirement for online applications, they pointed out.