The election madness hasn’t perturbed her one bit. She seems to have seen it all, right from the time she started extensively campaigning for numerous elections post her marriage to politician Dr Jeevraj Alva, when she was no more than 16 years old! Being a danseuse, businesswoman, socialite and homemaker, she did not fear adding more to her juggling act.

Today, Nandini Alva, all of 52, sounds very articulate when we speak to her about her entry into politics. She has been chosen to contest as a JD(S) candidate from Bangalore Central for the upcoming Lok Sabha polls. Nandini Alva speaks about the issues close to her heart and why she chose to join JD(S) despite the history of infighting between her late husband and the party. 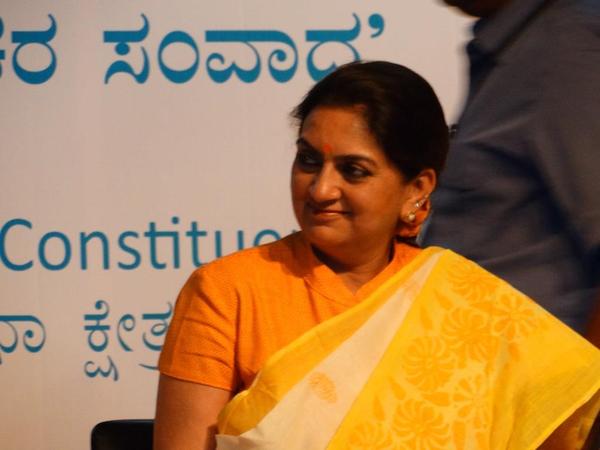 How confident are you of winning the elections?

I am very confident. I am in no hurry unlike the members of the Modi bandwagon and I don’t want to resort to the crony capitalist ways of Congress either. People are very unhappy and bewildered by the previous government. They are tired and they want quick results. But, at the same time the voters need to realise that there are no quick fixes in politics. It took 15 years even for Modi to bring development in Gujarat. It has to be about working in the grassroots level, keeping in mind elements such as social justice and equality.

What’s your view on keeping political parties out of RTI?

I don’t find it logical. There is no reason political parties should stay out of the RTI ambit. Why treat them any different? Before becoming politicians, they too are part of the public. Keeping them out of the RTI will only encourage malpractice. Politicians don’t have a special DNA to be treated any other way.

How are you funding your campaign? Is it personal money, donations or is it the party’s money?

It is all donations by relatives and well-wishers.

Why did you choose JD(S), given the history of infighting between Jeevraj Alva and H D Devegowda? Is the past forgotten?

There is no point living in the past. My relationship with the JD(S) is not ideological. It is thoroughly professional. I believe that JD(S) is a secular party and they do not indulge in communal politics.

Do you think your party will support anti-corruption steps such as unique property ID cards and khata without bribe?

I believe ‘I’ can make a difference. A political party comprises many people with their individual ideas and opinions and I can’t speak for everyone. For many political parties, talking about corruption might just be a way of garnering votes or playing vote bank politics. One needs to understand that we all are part of the system and we need to clean our own mess. I believe that rooting out corruption has got everything to do with the will of the people.

What are the issues you have identified, which you hope to address in the next five years? Tell us about your vision on Women and Minority Empowerment, which finds mention in your website.

Women Empowerment: I believe that the vision of empowering women is an invaluable asset in determining the future of the nation. I want women to be self-sufficient and financially independent. I am familiar with the struggles faced by a woman singlehandedly, trying to make it on her own.

Co-operative movement: I am a huge supporter of the co-operative movement including co-operative societies and banks, which has seen success worldwide. Germany has the largest number of co-operative banks in the world, where India has largely taken inspiration from. I want to introduce it locally to help small industries like weavers, agarbatti rollers etc. and find ways to incentivise them and recognise their contribution.

Financial help for artists: Since it is hard or next to impossible for artists to get loans, I want to start a co-operative bank exclusively for artists.

Garbage issue: Developing a revenue model is the only way. I have been speaking to the BBMP Commissioner to make commercial property owners, who are the biggest generators of waste, accountable for the waste generated by them.

Water management: It is a State issue. I would rather focus on water preservation, urban forestry and recycling.

Revamping of the education system and introducing vocational training for youth and adults. I also want to focus on developing employment-rich industrial areas and labour-related issues.

What do you think about electoral funding? Is the limit fixed by EC enough for your campaigning?

I think it is more than enough. I feel that those who spend over the limit are the ones who are trying to cover their inability. Most parties do spend over the limit and they even employ daily wage workers for campaigning and they are not the ‘party members’. The only way is to work hard and grow your membership within the party instead of relying heavily on campaigning.

What do you think should be done to stop the flow of black money?

Taxation reforms are largely the solution. I think that the issue is much deeper and that pertains to ‘hunger’. Unless we work towards removing income disparity and making India hunger-free, it will definitely lead to more greed and people won’t care how they make money or where the money is coming from and that is where the issue of morality and black money arises. The black money issue certainly makes for nice urban scenario talks, but we need to realise that our society is suffering a huge psychological impact of hunger. I am surprised that neither Modi nor any other party has touched on this topic.

Given the history of HDK’s alleged involvement in mining bribery scams etc, do you think you took a right decision by joining JD(S)?

In any government, lobbies are very powerful. There has to be an internal change. Few leaders can make the change and I hope to be one of them.

Why are you in JD(S), not any other political party?

I am sick of the Congress and BJP politics. How can you constantly give mediocre candidates to the public? I don’t understand why BJP is again fielding Ananth Kumar, a fifth time MP from Bangalore South, instead of promoting young blood. I am with the JD(S) because it is a regional party with regional sensibilities.

Do you think you can reach the conventional JD(S) voters? Do you identify yourself with them?

Bangalore is like ‘mini India’. It is extremely diverse and I take my greatest learning from the culture of this place. Coming from a rich cultural background, I feel that I have the ability to offer a very different perspective and only an artiste can have that level of sensitivity whereas other parties are teaching people the ‘mob mentality’. I understand the importance of arts and culture, which is a vital part of tribal Karnataka and more importantly, our social fabric. I think this is probably the first time a performing artist is contesting the public elections and is not being nominated by a party. Do you know that there is a large percentage of able bodied people in the age group of 40-65, who are not earning today? Neither BJP or Congress has thought about it and they won’t address this. I want these issues to be addressed to the High Command.

Are you here in politics to stay? What will you do if you lose? Will you continue to be involved at a local level to solve issues?

Absolutely, I am here for the long haul. I have been part of politics in the past and I will continue to be a part of it in future and motivate more youngsters to bring change. I will work on the issues and challenges facing the public, irrespective of the results.

About Prajwala Hegde 2 Articles
The author has not yet added any personal or biographical info to her or his author profile.

Ex-cop to try his luck from Bangalore North yet again

A peek into the life of JD(S) candidate for Bangalore North, Abdul Azeem.

Everytime a building collapsed, I wrote to BBMP, says Limbavali

Volunteers from Million Voter Rising, the citizen group from Mahadevapura, interviewed candidates contesting in the Karnataka Assembly elections from Mahadevapura constituency. This is the transcript of the interview with the incumbent MLA from Bharatiya Janata Party,

Are you a teacher? Register as a voter now!

Only 10 days left to register in the voter list for Teachers’ constituency. The final draft will be published in January 2014 for the Jun 2014 election.