Jayadeva Institute of Cardiovascular Sciences and Research vehemently protested the plans for the Metro to pass through the hospital’s parking area. On the other hand, Narayana Hrudayalaya, another prestigious heart hospital in the city, has requested BMRCL to extend its line from Electronic City to Chandapura Post – a 5 km away from the last Metro stop. Narayana Hrudayalaya has also showed willingness to provide land for a station within its campus.

Citizen Matters tried to probe the consequences of having a Metro line or a station near hospitals. A senior engineer in Bangalore Metro Rail Corporation Ltd. (BMRCL), on condition of anonymity, said: “There are no such rules that prevent Metro from running near a hospital.” 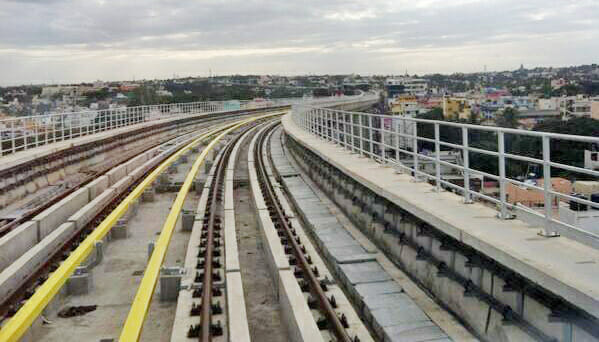 Hospitals at Delhi and Kolkata too have Metro lines running as close as 100 metres. Vinayak Hospital, a multi-specialty hospital located at Noida Sector 18, has an elevated Metro station at a distance of 100 meters. Medical Superintendent, Vinayak hospital, Saurabh Gehlot doesn’t find any problems with Metro services. He says, “Metro has absolutely no effect on the patients. None of the patients have complained against Metro. It runs very quietly, in fact rarely do we realise its presence.” Talking about convenience, he said that the patients as well as hospital staff find it convenient to travel. He believes that Metro doesn’t have any effect on the cardiac patients.

‘No problem to pacemaker patients’

Back home, Chairman of Narayana Hrudayalaya, Devi Prasad Shetty, too has the same opinion. “Metro station and the train will not affect the pacemaker patients. Having a Metro near a heart hospital is ideal for quick transport. Metro station should be as close to the heart hospital as possible so that patients can be wheeled from the Metro tube to the ICU directly without any intermediary transport like an ambulance,” he stated in an email to Citizen Matters.

However, it is to be noted that none of the hospitals have Metro station within its compound as close as 20 to 30 feet, as was the case of Jayadeva hospital.

“The Metro facility was likely to sit on the neck of the hospital building and on some delicate essential utilities like Magneto Cardiology unit, the oxygen plant, and the underground diesel tank. There is no space available elsewhere to shift these essential services,” says Jayadeva director C N Manjunath, in a debate published in Deccan Chronicle. Around 40,000 sqft belonging to Jayadeva was to be acquired, according to the original plans.

Jayadeva hospital’s realignment request resulted in a big controversy between benefits of infrastructure, social need and need to save one of the world’s best public cardiac hospitals that caters to 2.5 million cardiac patients a year. The hospital, located at the JP Nagar junction, is at the centre of a high traffic zone, with four roads connecting to prime areas like Bannerghatta road, Marenahalli Road (Jayanagar), Dairy Circle and Silk board.

Paying heed to Jayadeva’s objection to the phase II route, BMRCL proposed a re-aligned route, and a High Power Committee of the state government accepted it. The committee debated the pros and cons of all the options that can be used instead of the proposed previous plans. The state cabinet approved the re-aligned plan and it is now awaiting the union cabinet’s approval.

The newly proposed re-alignment will now cause demolishing of 98 buildings and add an additional cost of Rs.145 crore to the BMRCL.

“BMRCL has responded positively,” says Devi Shetty. However, BMRCL is yet to respond to the hospital with any written communication, but he is sure that BMRCL will help them. However, this proposal comes with an added burden of extra cost for the BMRCL.

He says Metro station and the train will not have any affects on the pacemaker patients. “Referring to Bangalore’s traffic chaos and how ambulances get stuck up in the traffic,” he explains, “having a Metro near a heart hospital is ideal for quick transport. Metro station should be as close to the heart hospital as possible so that patients can be wheeled from the Metro tube to the ICU directly without any intermediary transport like an ambulance.”

He also suggests attaching an extra compartment to Metro as ambulance, which can be fixed or dislodged anytime. Heart patients can be transported comfortably and quickly to the destination with the help of such arrangement.

Apart from Metro station becoming an obstruction, top officials of Jayadeva believe that the patients will prefer travelling by road than railways.

“At the time of heart attack no patient will go by Metro, they will call an ambulance,” the source said, adding that, “Saving the hospital is of larger public interest than saving few houses. This is a public property, which caters to 2.5 lakh patients. 90% of the patients will travel by ambulance.”

However, Narayana Hrudayalaya officials believe that patients will prefer Metro as it will be cheaper and will save patients’ time that is wasted in traffic at the time of emergency.

Determined to protect the houses from demolition, the Jayadeva Interchange Metro Victim’s Forum and the local Residents’ Welfare Association have asked to meet the Chief Minister Siddaramaiah. However, they haven’t been able to meet him so far.

Ramesh says the forum has repeatedly asked BMRCL to run the Metro underground, which will not require displacement and will reduce pollution.

“BMRCL doesn’t want to take Metro underground, as it  involves huge investment,” says Ramesh. He clarifies that they are not against the Metro. “It is an important public utility, but we just want it to run underground, so that none of the buildings are affected.”

Sources in the BMRCL confirm that BMRCL is indeed short of funds to take Metro underground. An underground project will cost Rs. 400 crore per km as against the 175 crore per km for the elevated way. “Already we are tight on funds,” sources from the BMRCL said.

Large township projects can severely damage biodiversity. Yet, they often get Environment Clearance based on misleading, copy-pasted EIA reports.

Bangalore South has poor and rich candidates. What’s interesting about the affidavits of these candidates?

The idea was proposed by a citizens’ community and became a reality through BMTC. An additional 10,000 Bangaloreans hopped on and off buses on ‘Bus Day’, according to one estimate.