Ganesha festival celebrations that are meant to bring joy to all, proved fatal for two BBMP workers last year, near Whitefield, Bengaluru. Trying to immerse a huge Ganesha idol made out of Plaster of Paris, these two workers ended up drowning in Varthur Lake last year, as the idol did not sink. 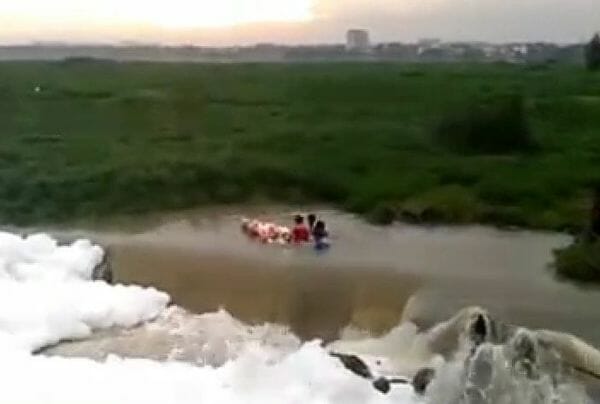 A screen grab of the Varthur Lake incident during Ganesha Chaturthi in September 2013.

This explains only a part of the danger that Plaster of Paris idols can pose. The pollution caused by PoP idols is known to all, still ignored. Come August, Karnataka State Pollution Control Board (KSPCB) and Bruhat Bengaluru Mahanagara Palike (BBMP) champion the cause of eco-Ganeshas and eco-friendly celebrations. It is a slogan that pops up in Bengaluru every year during this time: “Use clay idols of Ganesha, do not use Plaster of Paris idols!”

However, by this time streets of the city are already filled with Plaster of Paris Ganeshas and clay idols painted with lead-based paints. Again in September, KSPCB comes up with reports of pollution levels in lakes, which actually do not show any outcome in terms of awareness among public.

Why? What’s wrong? Why people don’t want to stop buying the POP idols or the ones painted with chemicals? Why there are no strict actions or ban against the manufacturing and sale of PoP idols when everyone in the government agencies is aware of the ill-effects?

‘We cannot ban Plaster of Paris’

Why cannot Plaster of Paris idols be banned? Karnataka State Pollution Control Board (KSPCB) Chairman Vaman Acharya says: “It should definitely be banned, but we cannot ban them. These are sentimental issues.”

Chief Environment Officer of KSPCB, Nandakumar, agrees with this statement. He says: “We can’t ban the use of Plaster of Paris or use of heavy metals on idols, as there is no such provision under environment act or water pollution act. Such provisions can be made by senior authorities of the State.”

What happens when PoP is banned?

There are states that banned the use of Plaster of Paris. The first state to ban the use of PoP Ganesha idols in India was Tamil Nadu in 2004, followed by Gujarat and Maharashtra in 2011 and Goa in 2013.

The POP idol makers in these states knocked the doors of their respective High Courts. The ban on POP idols was declared as unconstitutional by the respective state’s High Courts. Tamil nadu, Gujarat and and Maharashtra then banned immersion of POP idols in lakes and rivers. These governments allow small idols to be immersed in artificial tanks while bigger idols continue to get immersed in rivers.

In Mumbai, ban on immersion of small POP idols in rivers and sea remains on paper. However, last year, Nagpur Municipality became the first city that incorporated the ban on the immersion of POP idols in its City Bye laws.

What happens after the idols are immersed?

Nandakumar told Citizen Matters that the idols should be removed from the lake or the Kalyani within 24 to 48 hours, before the organic matter gets putrefied with PoP. However, when pointed out how BBMP continues to leave Ganesha idols in the tanks near various lakes even after two months of Ganesha festival, he said: “They can remove the PoP from the water body and let it dry and then dispose it in the Municipal dumping ground.”

Both Acharya and Nandakumar claim that PoP is not a harmful substance on its own.Acharya expects people to take more responsibility and stand up for the lakes. He says: “Let people shout aloud and stand against the use of POP idols.”

Like every year, this year too, KSPCB is busy promoting use of clay idols or eco-friendly idols in different schools. They have issued guidelines to make use of small, clay Ganapatis.

Acharya hopes that the citizens undertake Ganesh exchange programme in which one community exchanges idols with other communities. He said, “Instead of immersing the Ganesha in the water, people should keep the Ganeshas dry and exchange it with others, they can repaint their Ganesh and use it for the next year. In this way, people can save their lake and their own drinking water.”

No direct immersion in lakes allowed

BBMP Commissioner Lakshminarayana says the BBMP has identified lakes for immersion of Ganeshas. Kalyanis separated from lakes are meant to immerse Ganeshas, and barricades around lakes are some of the steps taken up by the BBMP. BBMP has also instructed contractors to clear all waste from lakes immediately.

Lakshminarayana feels that fining people does not solve the problem. “People should be sensible and buy eco-friendly ganeshas,” he adds. When asked why BBMP cannot include a ban on use of PoP-Ganeshas like in Nagpur Corporation, Lakshminarayana said “we can definitely think about it.”

Recalling the Varthur lake drowning incident, Lakshminarayana said the Ganesha was big, made out of Plaster of Paris and was floating. When the worker applied force on it to immerse it in water, the idol came back with equal pressure, which led the boy to lose his balance and drown. This time Ganeshas cannot be immersed directly in lakes, he added.

Eco-Ganesha : Where to find him, and why?
Where to get clay Ganeshas this festive season?
Go green with Ganesha this time
Ganeshas and lakes
An eco-friendly Ganesh Chaturthi could win you a prize!
KSPCB puzzled by preliminary data on lake pollution

What’s up with the MLC elections?

Citizen Matters brings you the latest on the upcoming election for the Bangalore graduate constituency. How to register? Who is contesting? When is the election?

The latest on the elections — poll dates, how to check poll violations, brands and candidates and the latest party hoppers!