Karthik, a 12-year-old boy, studying in Class 5 at Sacred Children School and PU College, was trampled to death by a tusker on 9 September, 2013. The incident took place in Doddamaranahalli, near Tavarekere, which is around 23 kms from City centre.

According to eyewitnesses, the incident occurred when Karthik went too close to the tusker to get a better glimpse in the morning.

The tusker, which is said to be aged around 12 years had separated from its herd in Savandurga and appeared near Hunasamaranahalli. The Forest Department and police officials say that seven boys spotted the elephant and started following it. The increasing noise by the villagers and the boys agitated the young tucker which ran amok.

While others escaped, Karthik fell into a pit. The elephant cornered him, threw him in the air around eight times and then trampled him to death. After which the elephant ran away. The Forest Department officials combed the area on Sunday afternoon and found the tusker nearby. They drove it into the forests of Ramanagara. The elephant was then sighted in Kittanahalli reservoir at night and then later united with its herd.

This is not the first such incident. There have been many instances of man-elephant conflict in the past.  On July, 2013, a herd of 13 elephants which included calves had strayed close to Sarjapura Road. The herd had trampled two men to death including a journalist near Anekal. The Forest Department drove the herd towards Bannerghatta National Park, so that they could reach Tamil Nadu.

The High Court had taken note of the increasing incidents of elephants straying out of forest areas, destroying crops and injuring people. The court had also issued directions in June , 2013 to capture all rogue elephants creating havoc in and around Hassan, Alur and Madikeri.

In the wake of the increasing incidents of man-elephant conflict, Citizen Matters approached Raman Sukumar, Chairman of Ecological Sciences, Indian Institute of Science, to understand what is the problem and how it can be mitigated.

Raman Sukumar, who is also a professor at the Elephant and Forest Ecology Research Group, says that the best way to control conflicts is to control the curious crowd. The urge of people to drive close to elephants causes stress to the elephants. Here are the excerpts. 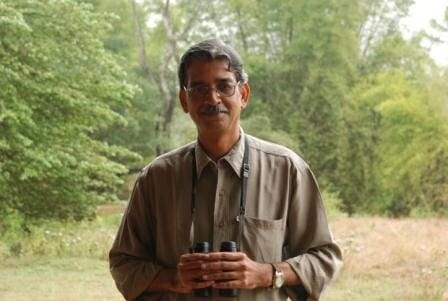 Why do elephants stray out of forest? Why do they attack people?

There are a complex set of factors ranging from habitat loss, degradation and fragmentation to local overabundance of elephants, adverse climatic events such as droughts and importantly the lure of cultivated crops that are tasty and nutritious!

How do we control the elephants straying out of the forest?

There is no easy solution. We can try to keep them within larger forest tracts such as protected areas and reserved forests that are intact, using suitable barriers such as electric fences. If they come out, then first try to drive them back into the forest. But this requires effective crowd control.

What is the most challenging thing when wild elephants stray out of the forest?

The most challenging task is to control the crowd, especially when they come to densely populated areas.

What measures can be taken to curtail such incidents?

Again, there is no are easy solutions. Our Elephant Task Force Report has listed a suite of measures which can be implemented. (The full report can be read at- http://www.moef.nic.in/downloads/public-information/ETF_REPORT_FINAL.pdf)

What should one be doing when he/she sees wild animals in human habitats?

It is important to keep a safe distance from the elephants. It will be better to move away from the sight of elephants.

Are elephants allergic/sensitive to any sound/ colour? If so, how can we be more sensitive regarding this?

It is difficult to answer this. They may be sensitive to certain sounds but this has not been researched. About colour, it is better to avoid very light colours like white or yellow and very dark colours also like black and red as elephants can pick up such colours easily amid a world of gray shades.

How should they be driven away from human habitats? Are the methods used currently perfect? Or anything to be changed?

There are no easy rules here. The availability of trained elephants is very useful in many situations. Generally the Forest Department does a good job unless local crowds disrupt the drive.

How far do elephants travel, in a day?

They usually travel a few kilometres only.  However, occasionally, they can make sudden long distance movements.

What’s the effect of allowing vehicles to move inside forest, in the name of safari? How do elephants react to this?

As long as the number of vehicles is limited and they follow regulations, it is fine. Elephants get used to vehicles. However, too many vehicles as well as improper behaviour such as going too close to the elephants, provoking them etc would create stress.

What has been the ratio of forest V/s elephants over last few years? Has the elephant population increased over the years or decreased?

I believe that overall the wild elephant population has increased over the past 30 years in the country, though there have been local declines such as in Assam and Nagaland.

Do you believe poachers played any role in limiting the population of elephants?

The selective poaching of male elephants for ivory has resulted in a very unequal male-female ratio. Beyond this, there is no evidence for any slowing down of elephant population growth. There are no easy statistics available for this.

Are elephants bamboo-specific animals, or is any forest okay for them?

Elephants are partial to secondary forests, including those in which bamboo is abundant. However, they do need some diversity of forage and would like to feed on leaves and barks of many shrubs and trees in addition to the grasses.

How to strike a balance between elephant population and existing forest areas?

This is difficult. Eventually, some limited capture of elephants that leave the forest completely and reside outside may be needed.

There are three choices before the new BJP government to improve infrastructure in the capital city and make Bangalore a more liveable place.

Fear of an epidemic looms at Shamanna Gowda Layout

With the retainer wall near storm water drain demolished by BBMP, people are left in lurch as water from the drain wreaks havoc in this layout.

The Cabinet’s act of quickly passing an ordinance that allowed convicted and jailed MPs and MLAs to contest the election is an example of what can happen if we don’t elect right breed of leaders.