For Bengalureans, who were getting soaked in frequent evening showers during last fortnight, unbridled load shedding came as a shocker. Load shedding that began with two hours of power cut everyday, was revised to four hours.

Load shedding has been withdrawn as of now and people are yet again enjoying non-stop power supply, but the apprehension continues to loom large. Long time residents of Bengaluru felt that it was almost after a 5-6 years they were facing such an inordinate power cut in the city.

Normally, monsoon season, that is, June to September, is considered as pressure-free period due to sufficient inflow of water to reservoirs that generate hydel power. If that is the case, why did the State face acute power shortage at this juncture? Is this an indication of the severe power crisis in summer? Are dark days ahead for the drought-hit Karnataka? Citizen Matters tried to explore the chain of electricity generation, purchase and supply functions in the State in general and BESCOM in particular, reasons for the power cut faced and what to expect in future.

Karnataka’s total electricity demand per day is 7,000 MW. Power scenario can be stable even if we get 6,200 MW, said Karnataka Power Transmission Corporation Ltd (KPTCL) Managing Director Jawaid Akhtar. “We will be in a better of position, if we get 6,500 MW power, which often we do not. During the last few weeks when the State was reeling under electricity crisis, we were able to supply only 4,000 MW power, which is 40 per cent less than the actual demand,” he said. As on Sunday (September 20th), the peak hour supply was 6,541 MW, indicating an improved scenario.

Of the State’s 7,000 MW power demand, BESCOM’s requirement is 3,400 MW per day, which is almost half of the state’s total power requirement. BESCOM covers Bengaluru Rural, Kolar, Chikballapur, Ramanagara, Davangere, Chitradurga and Tumkur districts, in addition to Bengaluru Urban district. 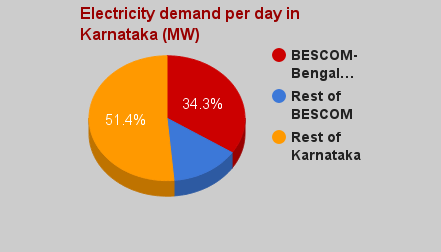 Bengaluru consumes 34.3% of power demand by the entire state.

The city’s demand is 2,400 MW, which is 34% of the total demand in the state. When the State faced acute power outrage recently, BESCOM was facing a shortage of 900 MW, with the state getting 4,000 MW and the city getting just 1,500 MW, explains BESCOM’s Technical Director H Nagesh.

Where does electricity to Bengaluru come from?

The State gets electricity from various sources. As far as power generation within the state is concerned, hydel and thermal (coal based) power plants (both government and private run) have the capacity to generate 15,000 MW power. When it comes to actual power generation, they can generate stable power only up to maximum 9,000 MW due to various factors like lack of water, breaking down of plants etc. Of this, nearly 3,000 MW power is hydro and the remaining is thermal power. Over the years, due to water scarcity, the dependency on thermal based power plants has increased to meet the ever-rising demand for power.

In addition, the State is supposed to get 2,300 MW power from Central Generating Stations every day. But the actual supply varies anywhere between 900 MW – 1,500 MW again due to various factors in the power generating stations. Apart from conventional sources of energy, the State also gets power from non-conventional sources like wind, solar and co-gen (sugar cane) plants. Their contribution is not determined because it changes everyday.

Explaining the same, KPTCL MD Jawaid Akhtar said that wind power generation varies every day. The power generation may be as low as 13 MW on a given day and as high as 1,700 MW on another day. “We can not consider it as stable power,” he said.

For a better understanding, let us take the power availability on September 16th. KPTCL got around  4,618 MW of power from hydel and thermal plants in the state, 1,004 MW from Central Grid and 1,362 MW from non-conventional sources, which was in total a little more than 7,000 MW, indicating a stable condition.

Why did Bengaluru face power cuts?

What happens when multiple sources of power generation units that we depend on, face one or the other issue at one given point? A situation of power cuts like what we experienced recently arises! Going by the official version, many power generation plants in the state broke down in the last week of August and first two weeks of September which led to the power crisis.

Placing forth the reasons for power failure, KPTCL Managing Director Jawaid Akhtar said that three weeks ago, RTPS, BTPS and UPCL units broke down for various reasons. Generally, thermal power plants are shut for annual maintenance in September as the water inflow will be good and electricity could be supplied from hydel power plants. Three plants were closed due to technical problems, and power supply from Central Generating Stations— Kudankulam and Simhadri too were stopped owing to annual maintenance.

Meanwhile, there was drastic reduction in wind energy too. Unavailability of thermal and wind power, coupled with lack of hydel power due to scanty rainfall, resulted in power outage in the State upto the tune of 2,200 MW. Of this, BESCOM fell short of 900 MW.

Bengalureans might have heaved a sigh of relief, hoping to see undisruptive electricity supply again. There has been no load shedding from last Sunday (September 13th) and on Tuesday, Energy Minister announced the withdrawal of load shedding.

According KPTCL MD, the situation is turning normal with the defunct power plant units resuming the work. RTPC and UPCL units have started functioning and Bellary unit is expected to start operating in a day or two. Central Grid plants too have resumed generation and the State is receiving its share. “We had also requested the Centre to supply additional 200 MW from CGSs which we have started receiving. Hopefully, we will not resort to load shedding in a near future,” he said.

Situation may be under control for the time-being as claimed by department, but will it remain the same? Load Generation Balance Report 2015-16 by the Central Electricity Authority anticipates acute power deficit in Karnataka. In the report, Karnataka tops the list in peak power deficit among all other states, with a deficit of 25.6 per cent. Peak power deficit is the shortage of power supply when the demand is at its peak.

However, in 2014-15 the CEA had predicted an anticipated energy shortage of 14.4 per cent, but the actual shortage was only 4.3 per cent due to lower energy requirement as compared to anticipated.

Power corporation authorities are positive about the future. When asked about how worse the situation can turn in summer, Power Company of Karnataka Ltd (PCKL) Additional Director said that the situation is likely to improve.

“450 MW of power will be supplied from Damodar Valley Corporation from December 1st and an additional 200 MW will be supplied from Kudankulam plant. We will also get additional power through other short term and long term contracts. Co-gen power plants (sugar cane) too are set to supply power shortly. Since September to April is sugarcane season, co-gen plants operate only during these months,” the official said.

Lack of rain results in less hydro-power production. This naturally results in increased dependency on high cost thermal power. The cost of hydro electricity per unit is 50 paise as against Rs 5.08 for thermal power.

KPTCL MD Jawaid Akhtar assured that the department is ready with a contingency plan to meet power demand this year. “Monsoon failure has resulted in reduction of water in reservoirs by 40-43 per cent. We have almost stopped using hydel power now and will reserve water energy for the summer. It implies that we have to shell out more on thermal power. Relying on thermal power is expensive considering the coal cost. Yet, the department has made arrangements to address the issue,” he said.

Why is state not drawing power from Northern States?

Union Power Minister Piyush Goyal had said recently that there was no dearth of power in the Central grid, but lack of transmission lines is an obstacle to supply power to Southern states. The Minister had even advised the state to focus on increasing productivity in its existing thermal plants than seeking more power from the Central grid.

When asked why is the state unable to draw power from the power-surplus Northern states, the Additional Director said that it was due to lack of transmission corridors. There are a few under construction corridors which are likely to be completed in two years, he said.

It is followed by yet another state-run power plant—Bellary Thermal Power Station (BTPS) which is expected to produce 7,016 MU this year. The total installed capacity of state run plants is 6,498 MW.

Apart from the power generated in state-run hydel, thermal, wind and solar power plants, power is also purchased from independent power plants (IPPs). Of these private power plants, Udupi Power Corporation Ltd (UPCL) has the highest capacity of 1,200 MW. Another 4,400 MW electricity is generated by non-conventional sources and captive plants that are operated by private sources.

Captive plants can be set up by any person to generate electricity for his or her own use. This includes wind, solar and other modes of power generation which yields a lot less electricity.

As far as Karnataka is concerned, Central Electricity Authority’s (CEA) monthly allocation report shows that Karnataka’s share is 2,367 MW as on July 31st. Of the states that come under Southern Region, Karnataka’s share from Central Grid is the second highest. Neighbouring state Tamil Nadu has been allocated highest power of 5,510 MW.

This allocation comes with a reason. Tamil Nadu is home for some of the major thermal and nuclear power plants that come under Central power grid. They include Neyveli Thermal Power station, Kudankulam Atomic Power Plant, Vallur Thermal Power Plant, Madras Atomic Power Station. Karnataka houses just Kaiga Atomic Power Station under the Central grid. In a nutshell, the more power stations a state has, irrespective of whether it is central or state’s own, the more power it is likely to get.

Hence, allocation of power from Kaiga is more to Karnataka, whereas our share is less in other central stations that are established in other states. Though there were proposals for setting up new power plants in Karnataka, including plants in Kudgi and in Niddodi, they have faced public protests. Villagers of Kaiga too have expressed opposition in the past over expansion of Kaiga Atomic Power Plant.

Where does Bangalore’s power come from?
Here is why Bengaluru will have to face powercuts sooner or later
Report unauthorised power connections to BESCOM
CM avare, Let’s change the game of power distribution in Bangalore!

Bright but toxic: The CFL bulbs that Bengaluru is unable to handle

Roofless, for a verdict they wait

A disputed decision to award a contract and years of litigation have come in the way of decent housing for the low-income residents at Ejipura. The rainy season has made lives miserable here.