In July 2005, when 900 mm of monsoonal rains hammered Mumbai for a 24-hour period and wreaked havoc on the city’s infrastructure and housing, political leaders in Karnataka reassured us that Bengaluru was immune to flooding given its inland location some 3,000 ft above sea-level on the Deccan Plateau.

Those assurances proved foolhardy. In October that year, over half of Bengaluru’s road network was inundated and thousands of homes and commercial establishments damaged following four days of unusually strong monsoonal rainfall. 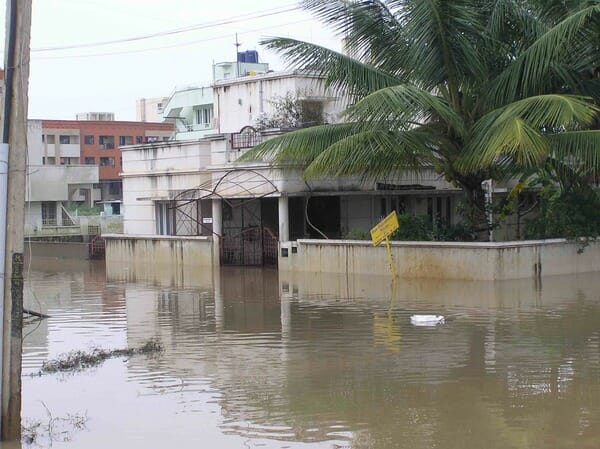 Ten years later, Chennai continues to reel under devastating floods—nearly 300 people have perished and thousands more await government and volunteer relief services. We are perhaps wiser to the fact that coastal and inland cities are not that far removed from each other.

In fact, much of the recent analysis tracing Chennai’s inundation to rampant construction on wetlands and storm water channels should ring a bell to anyone familiar with Bengaluru’s recent history. Beyond the inevitability of physical geography and weather, the origins of flood risk are social—inseparable from the history and politics of land and housing. It is here that we need to focus our attention for the long-term vitality of our cities.

Since 2012, I have been studying Bengaluru’s heightened flood risk, something I grew to be acutely aware of during my fieldwork in previous years on water access and citizen movements at the outskirts of the city. During a meeting with Srinivas, the then-assistant executive engineer of Bruhat Bengaluru Mahanagara Palike’s (BBMP’s) Bommanahalli Zone, I witnessed a group of women storming the engineer’s office, clearly distressed. Living in a low-lying unauthorised “revenue layout” without drainage connectivity meant that the previous night’s rain had flooded their homes.

Wealthier Bengalureans may be unaware of this—this is a routine occurrence for poorer urban residents without formal tenure and infrastructure. For these residents, risk is a multidimensional and normalised part of their existence.

Poorer residents are not only vulnerable to extreme weather, but also continue to be ensnared by a double-edged sword: a nexus between real estate developers, landowners, and various agents of the state. This nexus makes settlement possible for poorer and lower middle class groups without access to planned housing; at the same time, it can be exploitative and dangerous.

Modus operandi of the nexus

In simplest terms, this is how the nexus works: a developer (who might also be the landowner) converts agricultural or other land he has authority over (mostly known as general power of attorney, not necessarily ownership) into residential layouts or commercial property and quickly parcels it off to willing buyers without following planning, building, or infrastructure protocols. The “state”, heterogeneous as it is, can be involved (proactively or passively) in abetting and flexibly governing any part of this process for some amount of profit or prestige. 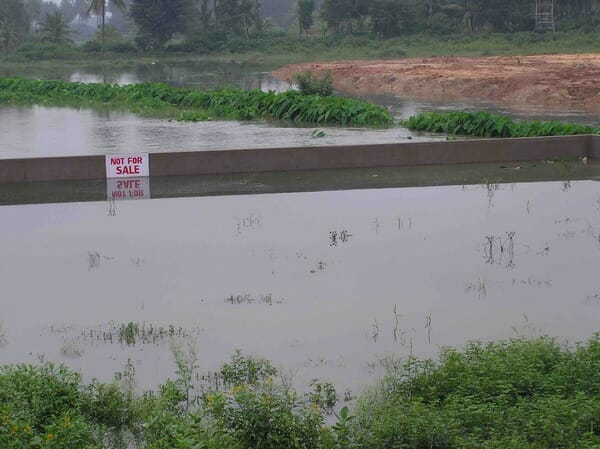 Suryanarayanan, the then-assistant executive engineer of Storm Water Drains for Bommanahalli, explained the dangerous effects of this nexus to me: “Until and unless heavy rains come, residents don’t know they are sitting on a raja kaluve [stormwater drain]. The developer has leveled the land. Wherever there were existing canals, they covered them with mud to make more money and hid them in the revenue survey maps. Government might know this but does not do anything about it. Then the developer forms the layout and sells it to people without providing inlets and outlets for water. So this is how an area becomes flood-prone.”

Urban land has become the frontier for capitalist growth in the last three decades. Fueled by a dizzying flow of global and domestic capital, Bengaluru’s real estate sector is one of the most profitable in the country. “Land” comprising of rivulets, marshes, and drains, known as kharab–B [non-cultivable] land in the Karnataka Land Revenue Act 1964, is technically owned by the state. In practice, however, such land is not owned by anyone and is thus claimable by anyone.

“No-man’s land” is especially profitable: fill in a parcel of wetland, as so many dump trucks in Bengaluru have been doing on a daily basis, and suddenly you have a saleable piece of property. Such filling-in with debris and concrete obstructs the flow of storm water and the percolation of groundwater, leading to a cascade of environmental harms, as researchers at the Indian Institute of Science have documented.

The term “encroachment” is typically used in Indian planning lexicon to denote illicit construction and settlement, including on wetlands and drains. Originally used in colonial law, the word has a legal connotation: to “encroach” is to extend beyond sanctioned limits. The problem is that in Bengaluru and several other Indian cities since the 1990s, the term has largely been directed at lower-income groups thus giving the sense that it is their actions—the actions of the encroachers—that must be blamed and disciplined.

In reality, not only is “encroachment” an organized process involving multiple actors, but it also extends beyond the settlement of the poor to large scale “land grabbing”—both legal and illegal—by powerful groups. For instance, state players such as the Karnataka Industrial Areas Development Board and the Bengaluru Development Authority have enabled high-end real estate on the sensitive Bellandur-Agara wetlands. This is the “nexus” working at the highest levels.

Google Earth image comparison of Bellandur lakebed between 2003 and 2015.

Even when people are protesting, and National Green Tribunal intervened slapping a fine, such large-scale encroachments are thriving because of money power. As a letter written by a coalition of anti-land grabbing activists dated October 2014 to the Governor of Karnataka rightly argues: “Government is only clearing land encroachments made by poor people for their livelihood under guise of taking action as per the AT Ramaswamy Report [an unheeded report on Bengaluru’s encroachments submitted to the state legislature in 2007]. No action has been initiated against huge land grabbing by powerful people”.

The encroachment and conversion of Bengaluru’s wetlands into alienable property is not a new phenomenon. Until the mid-20th century, a network of engineered and naturally occurring water reservoirs called keres in Kannada or “lakes/tanks” in English extended across the landscape. More than a thousand such tanks  interconnected through canals (today’s raja kaluves) once crisscrossed the urban district of Bengaluru.

As anthropologist David Mosse has chronicled, village-managed tanks were developed all over South India four centuries ago in response to the vagaries of monsoonal rainfall and the cultural and political traits of pre-colonial agrarian states.

These traditional water-harvesting systems were not entirely flood-free: in times of exceptional rainfall, the interlinked, gravity-fed nature of the tanks was such that overflow was amplified. But this was considered routine in an agrarian society, and was offset by the fact that in normal monsoon years, a more or less predictable distribution of water was achieved. 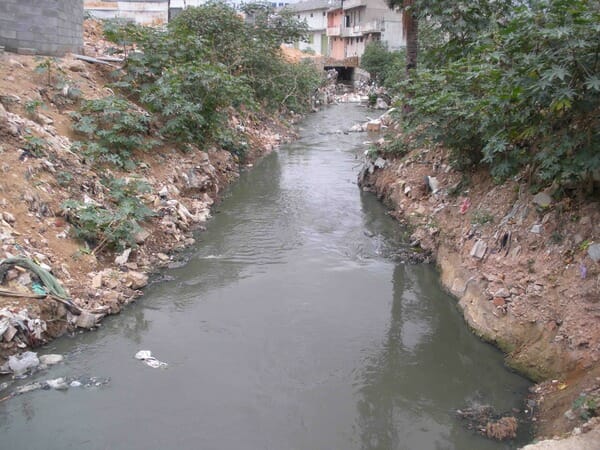 In the last century, as agriculture has declined and people’s ideas have changed in favour of modernist water infrastructure like piped water systems, local tanks have lost appeal. After independence, massive government-sponsored water projects took off. The city’s water supply began to be sourced from increasingly further river reservoirs—at increasing cost and energy intensity—thereby indirectly contributing to the abandonment of tanks.

As a result, many of the city’s tank beds were drained in the public interest to make way for bus depots, sports stadiums, golf courses, and residential layouts. It is not uncommon, for instance, to find middle class residential areas in Bengaluru named after a certain “tank bed layout”.

The dumping of raw sewage into tanks—a process first set in motion by colonial projects of “improvement” that sought to sanitize the city as quickly as possible following the plague outbreak of 1898—also compounded public disregard for these water bodies, thus facilitating their appropriation and the city’s overall flood-proneness.

Today, as HS Sudhira and Harini Nagendra have written, a mere 200 water bodies survive in varying states of health within Greater Bengaluru, which translates into a roughly 80% decline in lake surface area over the last three decades. Despite a few noteworthy instances of lake protection advocated by residents and environmental groups, the city’s lakes are succumbing to land grabs. The differences between the encroachments of yesteryear and today lie in the enormous scale today and the fact that such encroachments are almost entirely serving private interests.

A new activism around land grabbing and corruption?

Growing public recognition provides cause for hope. A shift in discourse is an important first step. Citizen groups have expanded the discourse of “encroachment” beyond its typical connotation of poorer settlers to also including large-scale state and corporate land grabbers. This is an important and welcome characteristic of contemporary civic politics in Bengaluru—a politics that is not defined by elite interests but by progressive demands for accountability.

An interesting development to watch for on this front are the linkages made between corruption and land grabbing. Anti-corruption activism has experienced a resurgence in India over the last five years, and while the term “corruption” is applied to many diverse activities, it is increasingly being applied to unequal land and housing governance in the country, wherein those who are most vulnerable are continuing to lose out. If the root causes of flood risk in urban India are to be remedied, it is to rooting out unequal land governance that we must now invest.

Flooded roads and broken sidewalks in the Manhattan of Bangalore
Will Detroit story repeat in Bangalore?
How Bengaluru is helping Chennai during floods
Water tankers: Making money when the sun shines and water flows!
Water doesn’t care where it flows!

Here’s how Bengaluru’s electricity crisis can be averted

Price hike is not the only solution to recover losses of power-producing agencies in Bengaluru and Karnataka. Why not produce more electricity to meet demand?

A heritage enthusiast plays history’s detective to discover a rare gem that was hiding in plain sight.

However, the south-western railways continue to maintain that their hands are full with catering to long-distance trains. Meanwhile, citizen group Praja.in and CiSTUP prepare draft plan for commuter rail services in Bengaluru.