Sushil Kumar, a resident of Sadashivanagar, was in rage and almost up in arms when he saw a majestic Gulmohar tree being axed to make way for road widening in his neighbourhood. When he tried to stop the workers from converting the trunk to logs, he was told that orders were given from the higher ups in the Bruhat Bangalore Mahanagara Palike (BBMP). When he contacted BBMP Forest cell top brass, pat came the reply, “I am not the authority concerned. But I will look into the matter, please give me the details.”

He is not the only one. Sunita K, a resident of Magadi Road, was equally upset, when she saw a beautiful Tamarind and majestic Banyan tree chopped overnight for road widening. When she called up the official, she was told that he will call up the concerned officials and find out the reason. 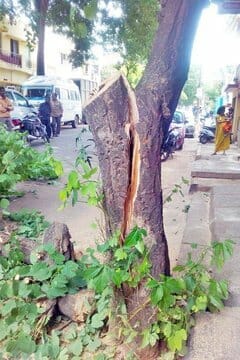 “I am tired of explaining to people that I am not the right person for these queries. Most of the time I do not know why permission was given or denied to axe a tree. This does not come under me. However, I understand their worries. So I collect the information and pass it on to the concerned Tree Officer, who takes it up from there,” says Kumar.

If BBMP Forest Cell Chief Conservator of Forests is not the authority to explain and answer queries of people, then who is the one?

According to a Government of Karnataka notification dated June 11, 2008, there is a dedicated Tree Authority for BBMP which looks into the felling and pruning of trees. It is signed by then under secretary, Department of Forest, Ecology and Environment, Vadagave Basavaraj. This  Authority has been constituted under Section- 3 of the Karnataka Preservation of Trees Act- 1976.

The reason why Brijesh Kumar is not a part of the Tree Authority is because when it was formed, there was no post of CCF. The post was created in 2010. Now the BBMP has not taken any steps to revise the notification.

Explaining why he is unaware of the trees being axed or pruned, he says that the tree officer is the Assistant Conservator of Forests and above him is the Deputy Conservator of Forests. Giving or denying permission is based on the discretion of the ACF. “I have the authority to question them and the ACFs are answerable to me. But it takes time. By the time I contact the ACF and he verifies it with his team and replies to me and I contact the citizen back, it is too late. Thus people should contact the ACFs directly or the DCFs or the Tree Authority.”

The chairman of the authority is the Mayor. The members are: BBMP Commissioner, BBMP Deputy Conservator of Forests (DCF), BBMP Joint Director of Horticulture and one elected member (corporator) of BBMP who has been nominated by the Mayor.

By contacting this Authority, citizens can know if a tree is being cut legally or illegally, and if it is illegal it can be stopped.

Social Media enthusiasts from all across the globe are celebrating Social Media Day on June 30. Bangalore is playing host to a series of events to celebrate the same.

Why thousands of Bengalureans could not vote this Lok Sabha election

Many Bengaluru voters were deleted randomly from the electoral rolls, without any verification, in a ‘drive’ just before this election. Conversely, thousands of applications for enrolment were not processed at all. Abrupt, abnormal modifications of voter rolls are costing citizens their right to vote

Science and technology writing in Kannada

Well-known names from the field of media along with tech geeks and bloggers discussed on how to make information on science and technology available in Kannada on the internet.