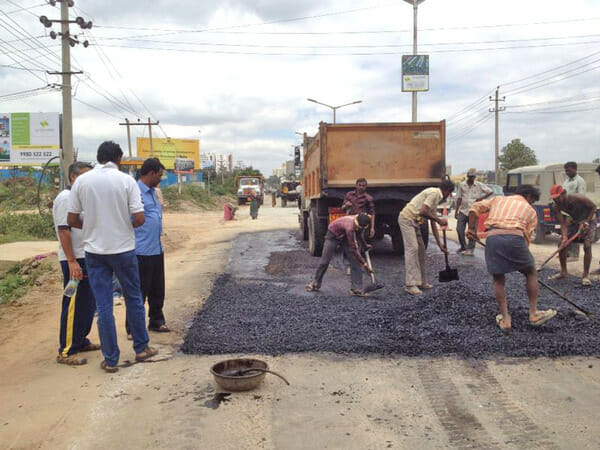 BBMP had initiated the road work, and volunteers started monitoring it, but the work has stopped now. File pic.

Citizen Matters had reported about the BWRCA-led road repair initiation in Kadugodi-Hosakote road. Even as the residents were euphoric about their small victory, everything has gone for a toss again. The work that took off two weeks ago has not been moving forward. The reason: potholes are not small enough to fit the ward level budget.

On persistent pressure by members of Bruhat Whitefield Residents Community Association, repair work of potholes took off at the Kadugodi ward level. But hardly after a week, the work slowed down and the labourers along with their trucks disappeared from the sight.

Assistant Engineer in charge of Hoody area, Dayananda told Citizen Matters, “I initiated the work without the approval because there was a lot of public pressure. But I had to stop it as the road doesn’t come under my jurisdiction but under Major Roads department. Now it is with them”

Some residents had alleged that the corporator of the area did not cooperate to execute the work. However, Kadugodi Councillor, Anjaneya Reddy denied to have stopped the pothole repair work but instead claimed to have it get done. On bringing onto his notice that the beginning of the Kadugodi bridge is still in bad state, he said, “funds are yet to be released for that work.”

‘Potholes are not our responsibility’

Maximum budget sanctioned for a ward to repair potholes is Rs. 5 lakh. “Major Road Department of BBMP failed to measure the problem and instantly take action. They say potholes are not their work, it should be done at the ward level. But, when potholes are so big that ward level funds cannot fix it, Major Road department realises it should be done by them,” says urban reforms campaigner R K Misra.

The original work was done under the ward funds whose maximum limit is only Rs. 5 lakh, but this work is not only pothole fixing but also repairing a bad stretch – it requires more work to be done.

Seetharam V S, Personal Secretary of R K Misra, who is a daily commuter on the Kadugodi – Hoskote road, says: “On Belthur road, a layer of bitmus was put when the work started, which gave us a relief for a while. But, now that it has been raining again, small small ponds are being created. If they don’t start soon, their work will be in vain.”  On Belthur road there has been some arrangement of  temporary drain, but on Kadugodi road there is no drain at all. The temporary drains may not survive, hence may not be very useful.

The residents even invited BBMP Major Roads officials to visit the place. On October 24, 2013, BBMP Major Roads Chief Engineer Somashekhar along with the Executive Engineer Raghavendra Prasad inspected the road’s condition and promised that steps will be taken immediately.

Now BBMP Major Roads Department has estimated a budget of 14 lakhs for this project and has submitted it to the Council for approval. The work is expected to restart before December 31.

Repairs to be funded from MLA fund?

The residents say that funds have been released by the PWD minister, though they don’t have documents to prove it. “Now we are trying to seek Panchayat’s help as the funds are insufficient. We have asked the GP to carry out the drains and footpath work. While PWD is requested to repair the roads, other agencies can take up street light issue,” says Sitaram.

“We are also looking for a PPP model and will approach the private builders around to make them understand the benefits of sharing the cost of road repair work. Once the road gets developed they too will benefit out of it,” he adds.

Meanwhile, rumour has it that the local MLA, Aravind Limbavali released Rs 5 crore from the MLA fund for the project. However, Limbavali was too busy to respond to Citizen Matters’ queries in this regard. His PA prasad said: “PWD secretary has not yet sanctioned any amount. For the time being they will fill potholes. Two to three months will be required to finish all the procedures. Rs. 5 crore under MLA funds is not yet released. We have sent letter to the government is still due to get sanctioned.”

But R K Misra counters this claim, by saying that the road doesn’t need 5 crores to repair – the amount required in lakhs. “He is more interested in the national politics than his own constituency,” he criticises Limbavali.

At one end is Hope Farm junction and the other end is Katanallur Cross where SH35 or Whitefield-Hoskote road meets NH4. Hope Farm intersection, named after a real place called by the same name nearby, is now called as Hopeless Farm by the commuters who bear the brunt of traffic on this stretch. The intersections locks down during peak hours and frustrates everyone. Incessant flow of trucks makes the signal meltdown by 8.30am.

To make things worse, the SH35 road towards the Hoskote side has been so battered by rains that some parts look earthquake-hit. It is so dangerous that for some driving has been taken to an art form. For others, a mutant aggression is developing.

The only government official who bears the brunt of the problem directly is the traffic policemen of Kadugodi. A senior Traffic Police officer L M Thejasm says, “There are too many potholes on this road. Rains increase our trouble… We request the passing tractors every day to fill up the potholes with mud.”

In the meantime there is even more action ahead. A signal free corridor project along Old Airport Road, Marathahalli and Whitefield will pass through the blood pressure Kundalahalli junction and end at the Hope Farm junction. That means more digging for underpass/flyover work in the days to come. But without clear alternate routes, the gridlock may get even worse for 2-3 years before it gets better, presumably.

Much to happen, clearly. Only silver lining in all the dark cloud is that citizens appear to be taking up the things in an effort to better the situation.

A boulder that fell on the railway track reportedly caused the Bengaluru-Ernakulam train to derail. Here’s the list of helplines, list of the injured and some photos from the site.

A number of recent verdicts from the IV Additional District Consumer Forum in the city is a virtual alert for consumers. The cases range from violation of MRP on goods to damaging household effects during shipping.

Most of Bengaluru groundwater not potable

With Cauvery phase II delayed most of the city still depends on groundwater. But the presence of nitrate, iron and flouride above permissible levels is a worrying factor.