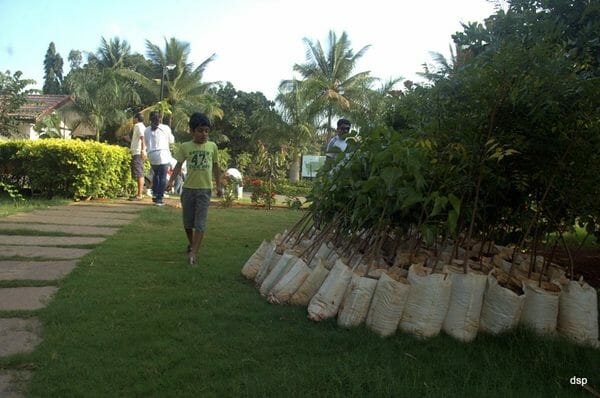 Saplings lined up for planting by BWRCA volunteers. Pic: Suryaprasad

Following the footsteps of The Ugly Indian, on October 2, the Bruhat Whitefield Residential Community Association (BWRCA) volunteer team took an initiative to plant saplings in order to help beautify the city. This took place in Whitefield near Chaithanya Samarpan and Chaithanya Smaran.

The team started off with an initial plan to plant around 150 trees for every kilometre and had a target of covering a stretch of 3.5 kilometres.

In the days leading up to event, various factions of the community lent a hand in the preparation. The Seegehalli Panchayat tidied up the initial stretch of area that was marked out by pruning the grass and digged up the earth to create holes for around 150 saplings to be planted.

They received the support of the Traffic Police who provided markers and helped manage traffic in the area during the day of the event. 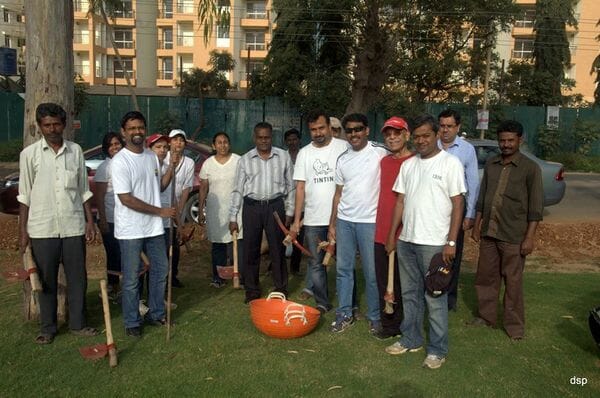 Members of the BWRCA group that led the plantation drive along Whitefield-Hoskote Road on October 2, with the help of Panchayat workers, traffic police and road authorities. Pic: Suryaprasad

BWRCA reached out to all the apartments in the area for donations. The Forest Department was providing some of the saplings for free but the rest had to be paid for, along with the transport for the plants, the clean-up of the area and the digging of over 500 pits.

The donations collected are being used for BWRCA and Whitefield Rising events. The volunteer group is planning to utilise the money to fund the next phase of the initiative which consists of finishing up the tree planting, installing tree guards and the general landscaping of the area.

On the day of the event, the volunteers met in front of the gate of Chaithanya Samarpan, Whitefield; each of them dressed in a pair of blue jeans and a white t-shirt. There was a good turnout with people from all age groups displaying their zeal for the event.

The volunteers included some residents of Sobha Amethyst, 10 Downing, Sai Gardens, Mahaveer Varna and Mims despite the distance between their own community and the location of the event.

The BWRCA volunteers are planning to put their newfound knowledge to use in order to make the next round better. They wish to follow the example of the Marathahalli – Varthur Road which saw improvement due to a Public-Private partnership initiative.

Whitefield residents set goals on waste management front
Whitefield on film, future and past
How to choose a healthy plant?