Residents of Whitefield who are tired of the poor infrastructure facilities in the area, will take to streets on Monday, November 30th, 2015. They have launched Save Whitefield campaign to protest against the government authorities’ apathy over improving infrastructure in the area and make it livable.

A Facebook Page Save Whitefield says: “On 30th November, we all march out of our homes and workplaces to be part of a peaceful protest from 10 am to 1 pm, to bring the city, media and authorities’ attention to the civic and infrastructure woes of Whitefield and neighbouring areas in East Bangalore.”

The organisers believe that the protest is for everyone who lives, works or studies in and around Whitefield — the children stuck for long hours in their school buses, farmers who can’t get their produce to the market, auto-wallahs and cab drivers who have to keep repairing their vehicles or refuse to drive unsafe areas, small business owners and people employed by large corporates, accident victims and others.

The protest will be held in five locations in and around Whitefield—Marathahalli bridge, Graphite India junction, Forum Value Mall, ITPL and KTPO. Five locations have been chosen so that people need not have to travel extra mile to reach the protest venue, says Zibi Jamal, one of the protest organisers.

Better roads, footpaths and street lights are the main demands of Whitefield residents. “The recent rains created chaos in the area. School buses were stuck for several hours due to total traffic mismanagement. That is when we decided to speak for our rights,” says Utkarsh Singh, a resident of Whitefield who initiated the protest idea. 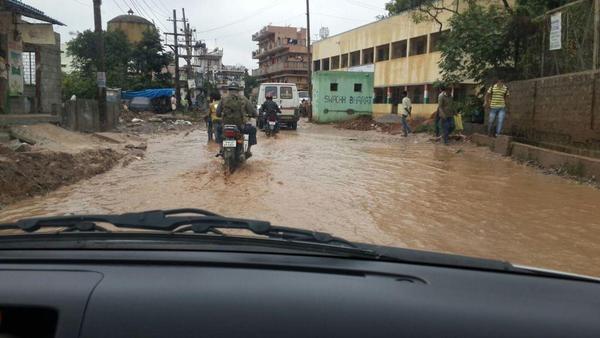 A road in the Whitefield area. Pic: Mani Paul

Apart from pothole-free roads, another demand of the residents is better public transportation. “Despite a large number of people working in ITPL, Whitefield, there are very few BMTC buses that ply on multiple routes. Some of the feeder buses do not even ply regularly. BMTC introduces bus service on a new route and withdraws the service within two weeks, citing lack of passengers response as the reason. They don’t even give enough time for people to be aware of the new bus service,” complains Zibi. She adds that a proper traffic management at place is another demand of the residents.

With all these demands, and a few more to be added, the residents have planned to stage a peaceful protest without disrupting the traffic. “Whitefield already suffers from enough chaos, and we do not want to intensify it by causing trouble to public in the name of protest,” says Utkarsh. Protesters will stand on pavements holding placards in different protest venues and finally culminate at KTPO.

“We have requested principals of schools and government colleges to join their hands in the protest and they responded positively. Leaders from corporate companies too are expected to participate,” Utkarsh hopes.

While the Facebook itself has received confirmation from 1,700 people of participating the protest, the actual number is likely to reach 5,000.

How can people participate?

The organisers have come up with ways to participate in the protest, for the elderly, children and others who are not able to reach the protest locations. They are:

Four things that can ease the traffic in Whitefield
Ruminations en route from Whitefield to the heart of Bengaluru
Soon, fresh veggies from the streets of Whitefield
Whitefield gets BMTC Chakra service, more Big Trunk buses soon
26 projects could: add 19,000 cars to Whitefield traffic, up water demand by 10.5 million litres