Early this century, Whitefield caught the attention of the world with the setting up of IT Parks and world-class gated ­­­communities. It became a symbol of modern India, a hub of smartness.

Whitefielders, including techies and farmers, immigrants and locals, rich and poor, bicyclists and water tanker drivers, are still working hard to stay in the limelight.

It’s hard to stay in the limelight by creating a few startups and a couple of fancy homes, Whitefielders have found. It’s easier to gain attention by extraordinary egregious behaviour as a community – lessons learned from the reality TV shows.

Whitefield now boasts the most polluted lake in the world. The massive Varthur Lake is nothing but pure sewage. Smell is hard to transmit in today’s media, but Whitefielders got their moment of glory as their lake foamed, looking like snow. The media descended from all corners of the nation to capture this glorious site.

“We were in the national limelight for several weeks until the Bellanduris decided to set their lake on fire,” states a local NGO head, adding, “Varthur is downstream of Bellandur, so of course, it is more polluted–remember that.”

Another recognition Whitefield got was by creating the biggest traffic jam. By constructing hundreds of large communities, but restricting roads to just two, Whitefielders want to create records for the longest commutes. However, Whitefielders found that media did not want to drive in to document that it could take 45 minutes to go 2 km. “Even with man-eating footpaths, walking can be faster than driving, but do newspapers care if it does not involve murder?” points out a shopkeeper.

When Delhi caught world attention with air pollution especially due to Obama’s visit, Whitefielders went to work. They have now made Whitefield air at least 20% more polluted than Delhi in all particulate categories. This required activity that, in parallel, boosted the economy.

The sales of generators, air conditioners, and diesel powered SUVs (had then known about VW earlier, they would have provided them a showroom for free) have all gone through the roof. Now they await the arrival of Bill Gates who they have invited and will ensure that international media captures his arrival with an oxygen mask. “We want to out-haze Delhi and Beijing,” says a local corporator.

Whitefield also wants to boast about local heating. Forget global warming, which talks about a 2 degree rise in temperature, Whitefield has raised its local temperature by more than 10 degrees. Again, so much work to get rid of trees and to asphalt and concretize everything has taken place.

“We managed to kill two birds with one stone,” says the manager of an appliance store. He continues, “By polluting the air and heating up, we have driven all folks indoors, and I easily double my quota of A/C sales every month. And since A/Cs cause ten times more heating than cooling, my next month’s sale is also guaranteed.” However, Dr. Pachuri’s team and august professors of IISc have declined to come to study this incredible rise in temperature citing traffic.

“We are not attracting students pursuing a PhD to come and do their thesis on the incredible rapid shifts we are making,” laments an aspiring corporator. “It will be a shame if our hard work to destroy this area is not documented and made famous.”

Of course, not everyone is happy—this is India after all. Some are positively angry and have grouped together to form Arise Whitefield. They have stood at traffic junctions and worn black, but it was too hazy for their signs to be seen clearly.

A resident of Meadow Palms complains: “My wife would not want to enter a hot car, so the driver would start the car at least 15 minutes before she would go anywhere. Now it’s so hot that my driver keeps the car running all day to stay cool. Many drivers are spending their days in comfort, while running the diesel engine for 6 hours, and if you say anything they will quit.”

White is the new green 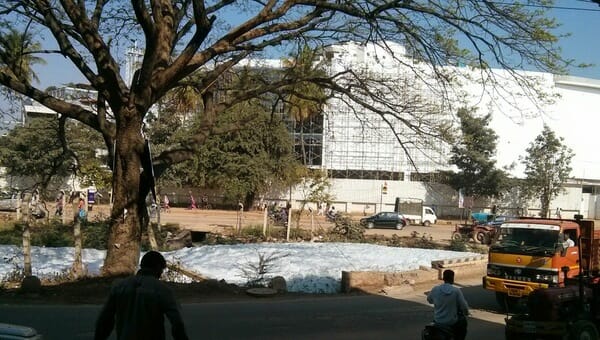 This tree is expected to be taken down to present a clear view of the white lake and advertising space on the opposite building. Pic: Rajesh Shah

Whitefield wants to become India’s first city without any trees. “Hey, we would have called it Greenfield, if we wanted trees,” says a proud construction supervisor of a new apartment. “Our vision is to create a smart city,” gushes one real-estate baron, “Forget windows, we now cover our buildings with communication space. See the newest tech park building near the famous Varthur Lake – the whole building is designed for messaging.”

Ishi, a young techie, said: “Walking in nature is primitive. The only place to walk is in malls and we have so many in Whitefield. It’s good to test all my fashionwear and even high-heels.”

Whitefield is also the new global center on diseases and human resilience. We have now over a dozen hospitals doing world-class research on the limits of human endurance. Whitefield hospitals are tracking the impact on humans exposed humans to the worst air, contaminated water, sewage (in the soil, water, and even in the air as aerosols), and noise.

“In addition, we would really like to also see the effect of stress and other psychological issues on people, especially children,” says a prominent physician. One school has been documenting the impact by tracking the rise in pharmacies—“From one to 22 in 10 years,” a ninth grader reports. Another school is tracking illness among staff, “Our principal is sick 3 months a year and all teachers miss a few days every month too.” “It’s very easy to make our monthly quotas for treatments here,” states a senior doctor at Narayan Asia, whose spouse has decided to live far away visiting every quarter

Some parents are concerned about their kids smoking the equivalent of a pack of cigarettes before they reach school. Of course, this worry has benefited many businesses. Shops are now selling facemasks faster than Fair-n-Lovely. One shopkeeper said, “Clean environment, less business. More pollution, more business. Don’t need advertisement.”

States a micro-financer, Suberswamy, “everything makes so much money here … bad climate makes people buy more stuff … and they fall sick more often so spend more. The poor take so much loans to spend on expensive treatments.” One venture capital firm, Heaven Prime, also loves this explosive situation: “I am evaluating three proposals to build chain of oxygen bars. One wants to club oxygen bars with cigar bars for the rich, another wants to help the poor by creating oxygen puffers at the local liquor dens—10 rupees a minute for good air.”

The sensor business is about to boom. Several startups and incubators are working on all types of sensors. “We will be able to sense everything in real-time and see it on our phone,” says Prem who is working out of his garage. I couldn’t find anyone who wants to act on data; Prem verified, “There is no funding for that, but for collecting and visualizing data, money is pouring in.”

Government also in race to win!

The government is not left behind is this race. “We can dig the roads up and leave them exposed and the people thank us for adding dust to the air,” says a senior engineer sharing how Varthur Main Road has become the dustiest in Bangalore and India. . “Where in the world would we get thanks for not doing our job and even more thanks for doing it badly and incomplete?”

Unexpectedly Whitefield’s record-breaking ascent has found support from a local NGO, whose charter is to support people and their health. The People’s Waste Exchange (PWX) is surprisingly enthusiastic about the high pollution levels. A spokesman said, “All around the world, the rich get their services without paying the price. The silent and the silenced pay the price of this form of one-sided ‘development’—energy plants, cement factories, mines, pharma companies all locate near them. Whitefield, thanks to Graphite India and their own activity is finally showing the rich the real effect of development. It will take time, but we hope the rich will finally stop asking for signal-free corridors and ask for less cars.” GreenPeas, an international NGO declined to comment, stating: “We agree 100% with all central government’s decisions.”

A very happy travel agency, MadeMyTip, chimes in: “Whitefielders are taking more vacations than ever. The very rich go bicycling in Austria. The next level go to Thailand. Middle class go to Sri Lanka and Goa. The poor go to Mysore and Tumkur.” Whitefield is now the vacationing capital of the world.

The news just keeps coming in; keep watching Whitefield for holding the records for the highest dengue rates, cancer clusters, asthma rates, and even stunted children. Vamsi, a techie, shows me his screen, “See how many hits our name generates. To be a smart city it’s vital to be shining on google, the viewers don’t care about actual smell or air quality reality.”  A local resident concludes, “Whitefield will also have the largest number of empty villas and apartments in 5 years in the world.”

About Rajesh Shah 1 Article
The author has not yet added any personal or biographical info to her or his author profile.

Recreational activities in lake premises: What is wrong with it?

Among the many issues raised by the recent event at Sankey Tank. One is – can this set a precedent for BBMP to lease out our parks, lakes, or wetlands? An ecologist from Bangalore ponders over the issue.

Street plays are perfect vehicles for political protest. Plays by three college groups at the Ranga Shankara Theatre Festival last week won applause, sometimes for clever lines and at other times for their message