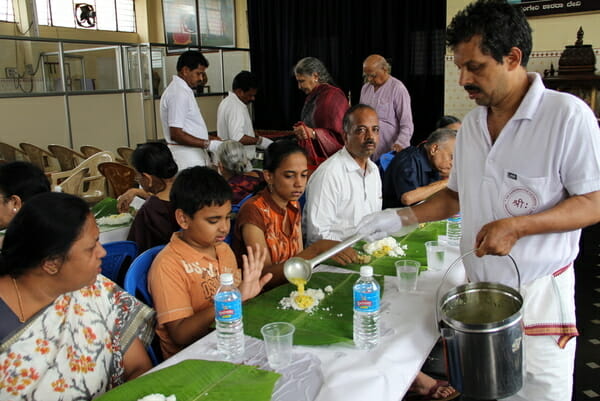 In many functions, food becomes excess and remains unused. Instead of wasting it, donate it to the needy! Pic courtesy: Lakshmi Partha

“Urgent: A friend just called me to say that food (Bisibelebhath & curd rice/pickle) that could serve 200 people is left over from a big event… Tasty and good in condition, I have been trying to reach any organisation that they can go and give the food to someone… Any leads/contacts of people who may find this useful?”

When Vasanti Hariprakash, Radio journalist and anchor from Bangalore posted this on her Facebook wall, there was a flood of responses. Jimmy Amrolia, a friend of Vasanti, had excess food that was prepared for an event, and wanted to give it away to the needy.

In a country where there are a lot of people who resort to begging to feed themselves, or where there are many charitable institutions that want people to help by providing food for the needy, throwing the excess food prepared does not really make sense.

Marriage functions, birthday parties, all types of big and small gatherings, religious functions, lodges and paying guest facilities, big hotels, restaurants, banquet halls and many other places are where one can expect food to become excess. If you have any plans to host any such event,  this is your guide to finding takers for the excess food which will go waste if not shared soon.

Despite millions of Indians going to bed on a hungry stomach, the country is letting food worth a whopping Rs 44,000 crore go waste each year, due to lack of adequate storage infrastructure.

While the wasted fruits and vegetables alone was estimated at Rs 13,300 crore, other food products like rice, wheat, cereals and meat also go waste.

The report released by Ministry of Statistics and Programme Implementation in 2013 said 48 per cent children under the age of five have stunted growth. It also indicated that half of the country’s children are chronically malnourished.

According to the United Nations’ Food and Agriculture Organisation (FAO), every year 1.3 billion tonnes of food is wasted. At the same time, one in every seven people in the world go to bed hungry. More than 20,000 children under the age of five die every day of hunger.

There are some people who believe that Child Helpline 1098 accepts excess food. However, an enquiry by Citizen Matters found that this is not true. Jennifer Y from BOSCO Mane, who is a coordinator at Childline, says somebody from Mumbai has spread this misinformation. “I think the misconception is because ours is a child helpline and people think that we accept food for children” she adds.

“Everyday we get calls from Karnataka and other places about accepting extra food. especially on Saturdays and Sundays, we get continuous calls asking for the same.” When asked about the solution for these calls, she says: “We are planning to do a press conference soon, so that we can spread the message that people should not call on 1098 for donating food.”

The stress caused by such calls on the system meant to protect children from abuse or distress can only be imagined. The situation is such that Child Line cannot even change their number. “This is the centralised call system and the numbers have their own meaning. So the number can’t be changed.”

So, who can make use of excess food? It is quite plain to imagine all orphanages would be willing to accept it. Each one has their own criteria.

Plan in advance, cook carefully, save it right

R B Shivakumar, a social worker and a resident of Rajajinagar, collects excess food from marriage parties and other social gatherings and distributes it among the poor. He stresses on the importance of planning the quantity of food per head before preparing, as an average person cannot eat more than 500 grams of cooked food at a time.

Even when food is prepared according to plan, there tends to be excess of food sometimes, due to many unforeseen reasons. Poornima Hari, a manager of an NGO (Bangalore), Samarpan Foundation, feels that people should plan in advance for such situations, by identifying the organisations that take excess food, so that nothing goes wasted.

There are some caterers who take responsibility of excess food themselves. Mohammad from Mark Caterers, Bangalore, says: “We have seen many orphanages which need food on regular basis. We donate the excess food from weddings, birthday parties and other orders to such orphanages.”

Some organisations have a particular time span within which they can accept food from the donors. Rosli from Missionaries of charities, Bangalore says, “We can accept excess food from outside before 4 pm for 50 of our members, including children and old people.”

Mr. Anand, Director of Shishu Mandir charitable organisation Bangalore opines, “We serve food to 320 of our members including children and adults. “Our organisation accepts outside food till 2pm” shares Divya from Shishu Mandir.

But some organisations have genuine reasons for not accepting food not prepared by them. “There are many diabetic and blood pressure patient residing here so we don’t accept outside food. Our food is prepared in using less oil and spices for 52 people on daily basis” shares Sridhar from Sri Sai Krupa old age home.

Methods to preserve the excess food

The food for big functions is prepared in advance – at least a few hours before. It is only natural that the food will not remain fresh for long time -so it should be consumed as soon as possible. In summers, the chances of food decomposing is higher than in other seasons.

So here are some tips to help you save the food.

So what are some tried and tested organisations that accept excess food and make use of it? The following table has some answers. Do let us know if you know more of them – we will add to the list.

So keep this write up handy! It will be of help when you organise a dinner next time.

About Vikram Kapoor 2 Articles
The author has not yet added any personal or biographical info to her or his author profile.

Apartment management: Before the builder hands over

When residents take over their apartment’s or layout’s maintenance from the builder, many things go wrong! This two-part guide helps you keep track of the critical legal, bureaucratic and day to day tasks.

Explainer: Know your rights if BMRCL wants your land or home to make way for the Metro

An explainer on BMRCL’s resettlement plans which include cost of land acquisition, compensation and rehabilitation packages.