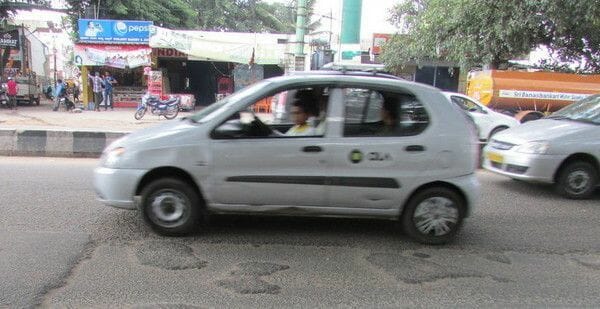 During the last few months, there have been several instances of the Karnataka Transport Department seizing cabs that operate under on-demand app-based aggregators. All hell broke loose for Ola and Uber cabs who were operating merrily in Bengaluru, when the State Transport Department introduced a formal set of rules governing taxi aggregators, on April 2nd, 2016.

In the previous two stories on taxi aggregators, you read about how Ola and Uber have changed the commuting pattern in Bengaluru, the commuters response to it, and how has it changed the lives of cab drivers in city.

The policy called as the Karnataka On-demand Transportation Technology Aggregators Rules, 2016, was framed following the Central Ministry for Road Transport’s guidelines for taxi aggregator  services like Uber and Ola operating within the jurisdiction of India. Karnataka is the first State in the country to introduce rules for taxi aggregators. In fact, the popular taxi aggregators – Ola and Uber – launched their services first in Bengaluru. Taking cue from Karnataka, other states including Maharashtra government have said that they will follow Karnataka’s footsteps in framing such rules.

The Transport Department which was already unhappy about the taxi aggregator services, began seizing Ola and Uber vehicles for non-compliance, once the rule came into force. Meanwhile, some aspects of the rules did not go down well with Uber, and the taxi drivers attached to the aggregators. Uber and a set of drivers filed a petition in the Karnataka High Court in May 2016, questioning some of the conditions mentioned in the rules.

What’s the rule all about?

The taxi aggregators rules makes it mandatory for the aggregators to get a license from the Regional Transport Office to operate. The license has to be obtained by paying a license fee and a security deposit.

The department has imposed certain terms and conditions to be fulfilled by the aggregators and drivers attached to them, to get the license. They include, aggregators should have a fleet of minimum 100 taxis, must have facilities for monitoring the movement of taxis with the help of GPS, GPRS along with a control facility. It also directs the aggregators to meet vehicle profile specification including a contract carriage permit for the taxi, display boards with vehicle permit and the driver’s details such as photograph, name, DL and badge particulars and ID card issued by police authorities, to be placed inside the taxi

A significant aspect in the rules is, it curbs the surcharge imposed on passengers. It says, “in any case the fare including any other changes, if any, shall not be higher than the fare fixed by the government time to time.” The RTO’s fare chart shows the maximum per km fare for AC cabs is Rs 19.50 and for non-AC cabs is Rs 14.50. While taxis can’t charge more than the prescribed fee, they enjoy the liberty to reduce the charge in the competitive market.

What has not gone well with whom?

The situation has become quite complicated. While US-based Uber has filed a petition in the High Court questioning the Aggregators Rules, Ola hasn’t done the same. Ola recently in its affidavit submitted to the High Court has said that it has complied with all the specifications of government rules. Its affidavit has been in contrast to the petition filed by Uber.

According to news reports, the advocate appearing for Ola even levelled allegations against Uber, of continuing illegal activities, giving scant respect to the laws of the country.

On the other hand, taxi drivers belonging to both Uber and Ola have filed a petition questioning some of the aspects in the rules. The drivers have contended that certain measures mandated by the rules such as installation of digital fare metres capable of printing a receipt and illuminated boards with a taxi sign are financial burdens.

In a recently held Smart Mobility workshop at BMTC office, Uber’s Public Policy and Government Relations officer Rachit Ranjan had this to say: “What the Karnataka government did was a good draft. However, there are certain pain points. We had given our suggestions to the government, which they did not consider while finalising the policy.”

Commenting on surge pricing he said: “Surge pricing is inherent and integral for Uber to bring in a good system. Without it, we won’t be in a position to control the drivers. To give the incentive to the drivers, surge pricing is must. Only a person who is desperately in need of traveling will pay the surge price to get the taxi.”

“it’s equally important that we work together with the government to help meet legitimate regulatory requirements that will support the future of mobility. However, it’s unfortunate to see the turn that this industry has taken today. Instead of rising above differences and helping build the future of this sector, it’s disappointing to note how baseless allegations are being levelled to confound and complicate matters.”

Further, he narrates the turn of events that took place after Uber applied for getting license to ply cabs, with the authorities.

“As required, Uber has submitted details for 100 cars to obtain the license under the current regulations. But for reasons unknown to us, we’re yet to be granted the license and have instead been asked to undergo the same process all over again with another local authority. Despite this, we are acutely aware that such a license, which only provides a license for 100 cars and leaves out the vast majority of other cars (estimated at close to 100,000), is not the level playing field that the government seeks to create. This is also precisely why Uber has moved the court.”

Commenting on the safety aspects raised by the commuters, Uber management says, the drivers attached to them have to mandatorily undergo background screening, obtain police verification. “The in-app SOS button has been piloted in India (available across all 22 cities) to alert the local police, if the commuter needs an immediate assistance in the event of an emergency,” the management says.

Citizen Matters sent an email to Ola management seeking their response on various issues surrounding the Taxi Aggregators Rules and safety aspects, but didn’t get a response.

When both Uber and Ola are reluctant to withdraw surge pricing (Ola has reintroduced surge pricing in the name of Peak Pricing), what do drivers think about it?

Uber driver Santhosh says he has no issues regarding the Transport Department fixing the fare. “Rs 14.5 fixed fare per km is decent. It works out for me, I am fine even with a little lower fare. Well, incentive, the drivers, never asked for it. They voluntarily gave us the incentive. I can make a decent earning with a fixed fare, but then it works out only when everyone else is following the rule. Or else it so happens that I charge Rs 14, and others would charge Rs 6. Obviously the customers will opt for the lowest fare,” he said.

Ola driver Sridhar says he can make reasonable profit even if the per km rate is fixed at Rs 9-10. “Customers too are not willing to pay surcharge. It will work out for us without incentive, as long as they (Ola) don’t deduct commission from our earning,” he notes.

However, what bothers the drivers is the rule which requires them to be register their cabs as contract carriage. It limits them to operate their cabs within 25 km radius of the BBMP. Most of the Ola and Uber cars have State permit and they do accept outstation trips.

Ramana Reddy, Principal Secretary to the Transport Department (he is transferred from Transport Department on July 21st), said recently in a workshop that the government is not against Uber or Ola, but all aggregators ‘must fall in line’ and follow rules. They have entered into a regulated market, hence should be regulated. They should obtain license in compliance with government guidelines.

In the same programme one Transport Joint Commissioner Hemanth Kumar said that Ola was complying with the rules, but not Uber. “They are charging exorbitant rates in the name of surcharge which needs to be controlled,” he said.

As of now, the High Court on hearing the matter, has directed the Transport Department to restrain from seizing the vehicles. Meanwhile the Court has also directed the aggregators to withdraw surge pricing. An order is awaited.

What stopped BBMP from rectifying the mistakes and solving the problems related to waste management, while the CAG pointed it out in 2008?

Panel: How secure is Bangalore?

On the eve of Independence Day, a panel discussed ‘Meeting the Challenges of Terrorism’ in the wake of the blasts in the city. A report.