Janatha Dal (S) candidate from Bangalore Central Nandini Alva, is known to Bangaloreans for her different facets – as the wife of Late Jeevaraj Alva, danseuse, beautician noted for her makeovers and the artiste who brought Bangalore Habba to the city. The fact that she campaigned extensively with her late husband, knows the drill and is known in political circles seems to be the reason she has made her political debut. 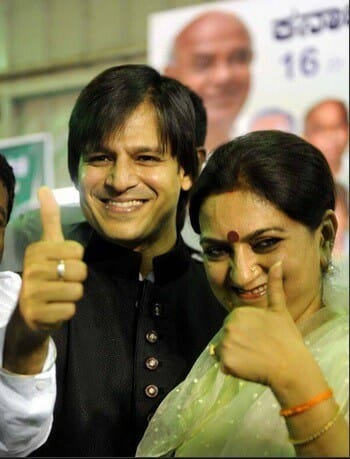 Nandini Alva’s parents moved to Bangalore in the ‘60s. Her father was a pediatrician in St. Marthas Hospital. She was born in 1961. A Bharatnatyam dancer since the age of 5, she performed for Smt Indira Gandhi when she was 14 at the Halebid Festival.

Nandini Alva’s history is intertwined with her husband’s life. Nandini Seth, who had a punjabi origin, married the young and dynamic doctor Jeevaraj Alva when she was 16-year-old, even before her 10th standard examinations, to become Nandini Alva. In the perfect setting of a happy family with two kids (Priyanka and Aditya), Nandini went on to become an accomplished classical dancer. She learnt to speak flawless Tulu, which was Jeevaraj Alva’s native language.

She also helped him in campaigning in the old Jayamahal Constituency, while simultaneously, working towards a Bachelor’s degree in Politics. She served as chief campaign manager for Jeevaraj Alva for the poll years of 1983, 1985, 1989, 1994 and 1998 says her website.

Jeevaraj Alva started his political career as a Youth Congress leader and proved his leadership skills. He shifted base to Janata Dal under the leadership of Ramakrishna Hegde. He became a minister in Ramakrishna Hegde government. Before this he used to escort dance troupes in which Nandini was a part of, around the country as an organiser.

The Alvas were a ‘happening couple’ in Bangalore’s social circles, for more than two decades, even when Alva was not in power. They stayed in Rajmahal Vilas, just opposite the picturesque Sankey Tank.

Jeevaraj Alva changed his party to join BJP, but he could not stay on. There were days when Jeevraja Alva’s men fought with H D Devegowda’s followers on political differences.

Jeevaraj Alva started spending less time with her a few years before he passed away. Nandini went abroad to study and pick up skills in photography makeup and skin treatment after which she opened a few beauty salons in the city. At the time of passing away, Jeevaraj Alva was the vice-president of Janata Dal (U).

Nandini Alva, after this, started getting involved more with the arts and culture-related programme dear to her heart. She was instrumental in organising the Bengaluru Habba in the city. She is a Managing Trustee of Artists’ Foundation For the Artists, an NGO founded by her and Padmini Ravi.

Her daughter, Priyanka is married to Bollywood star Vivek Oberoy. He is now helping his mother-in-law in the campaigns.

She can converse in seven languages : Kannada, Hindi, English, Tulu, Tamil, Sanskrit and French. Given the differences between Janata Dal and Jeevaraja Alva, it can be said that time is the biggest healer – as JD(S) has surprisingly chosen Nandini to represent their party.

Explaining her vision, Nandini Alva’s website has the following quotes from her:

“I am the mother of two beautiful children and a grandmother of a beautiful baby boy. I am the daughter-in-law of the Late Dr. Nagappa Alva, freedom fighter, Gandhian and the former health minister of our state. I am the wife of the Late Dr. Jeevaraj Alva, who served our city as a 5-term MLA and the state, as Education Minister and Culture Minister among various other positions. I have dedicated a large part of my life to the promotion of the arts and culture. Bangalore Habba is one of my creations. As a successful entrepreneur, quietly built and managed a large business.”

“We live in the times of tainted politicians and failed promises. We live in a time where change is imperative, urgent, and possible. I would like to offer you that change. We need a clean, credible and capable candidate who can walk the talk. I am your candidate. I need your support.”

The quote on corruption is interesting because, Kumaraswamy, who heads the JD(S) now, had told Citizen Matters last year, that corruption will not be taken seriously by people as a poll issue. Now he is fielding some of the cleanest candidates in town, in this election.

The chief minister’s ABIDe task force released Plan Bengaluru 2020, calling it a ‘dynamic document’. Alas, all this with no city council yet.

Rajya Sabha MP Rajeev Chandrasekhar is exhorting Bengalureans to vote. He has published advertisements in leading newspapers, mentioning his support for the BJP candidates. He responded to a few quick questions from us.

Come on Bangalore, this is a call for action

In this letter sent out to citizens’ networks in Bengaluru, Mohandas Pai, former Infosys Director and currently Vice President of the Bangalore Political Action Committee, is exhorting citizens to register enmass as voters for the coming state elections.