On the March 13th, we went to Arekere Reserve Forest (aka Doresanipalya) and while there, we found this baby Black Kite, badly injured, upon the ground. 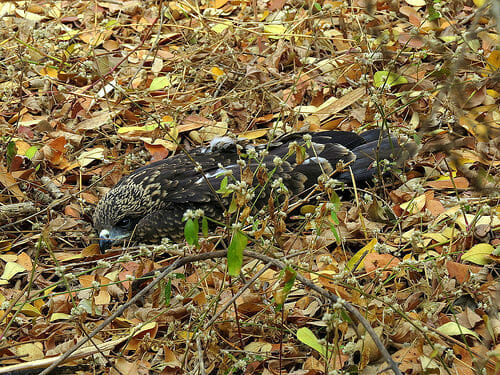 It was so badly off that it could not even clamber to its feet as it lay there in the grass clutter. It was heart-rending to watch the poor little one look at us with terrified, mute appeal. But alas! Very often, one cannot follow up on one’s emotional impulse to intervene in wildlife… whether in urban or forest areas. In this case, the very fact that it was so immobile told me that the injury was definitely a bad one. The baby probably was thrown to the ground while struggling in the grip of two Shikras we had seen overhead; they must have predated the nest (we could not see one nearby), picked up the nestling, and flown off.

There was also the strong possibility that this was a nestling and not a fledgling; that is, it was a baby bird that had not yet arrived at the stage of learning how to fly.

The mother bird was circling overhead, and though scientists keep telling us not to ascribe human emotions to other creatures, the parent’s concern was quite apparent.

But with a bird that cannot fly, for any reason, rescue is not a great option. One has to let Nature take its course, and remember that in the wild, Darwin’s rule of ‘survival of the fittest’ applies.

We hardened our hearts and walked away. I still cannot help thinking of what might have happened to this little bird afterwards. These are the moments when Nature can be less than delightful.

Dragons in the air

What comes to mind when you think of dragons? Do you summon up images of the mythical beings that belong in the realms of fantasy? Or do you picture those creatures with shimmering wings, only to look up and find them flying overhead.

The Great (Global) Backyard Bird Count is happening this weekend. How many species can you spot?

Expressions through the lens

An exhibition of photographs taken by an amateur photographer captures nature, architecture and people across continents.