The very word ‘Tarantula’ is something that strikes dread into most of our hearts. We’ve all heard the horror stories of ‘evil’ arachnnids delivering fatal bites.

However, though they may be deadly Tarantulas elsewhere, the ones we have nearby are generally more wary of us than we are of them, and do not bite until they are extremely disturbed.

Tarantulas comprise a group of very large and often hairy arachnids belonging to the Theraphosidae familyof spiders. Their large size and hairy appearance, combine to give most of us a dread of them. But they have some very interesting features!

Tarantulas do spin silk like other spiders do… but they do not have the kind of web that we often see. Instead, some of them, especially those which make homes in burrows, line their burrows with silk! Sometimes, to protect their babies, they even put up a “silk screen” in front of their holes. 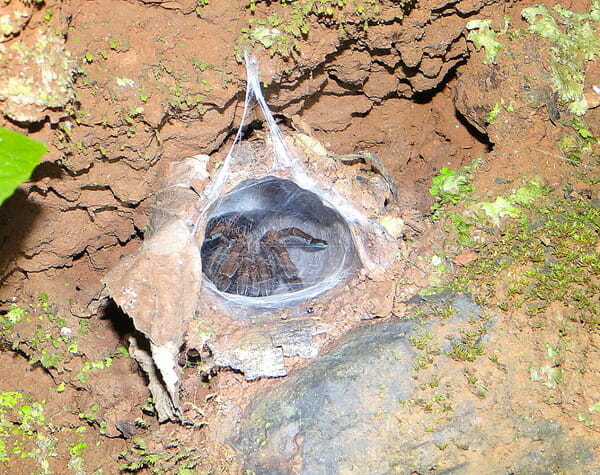 A tarantula under the silk-screen she has spun. Pic: Deepa Mohan

However, tarantulas themselves can be the prey for other insects. Here’s a video I took, as I once watched a Spider Wasp drag a Tarantula that she had stunned (you can still see it moving a little in the video), into a hole she made in the ground.

Such wasps then lay their eggs on the stunned spider, and when the larvae hatch later, they have fresh food. Another of the marvels of nature!

So, what’s crawly may not be creepy, if you get to know more about it… and the fear of the creature goes away, too!

They come in various sizes and shapes. Some are harmless, some are not. Observing them can be an interesting task that gives you insights into their world!

Bee devours the nectar while plants use it for pollination. Do you know who eats the bees?

There are some organisms that thrive in the moist, humid environment that the monsoons bring. And though they have a short life, they are beautiful and intriguing, when they appear.