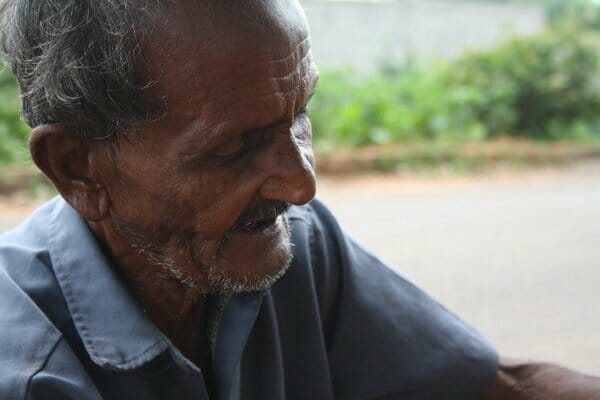 Our nation is facing a crisis in ageing as we attempt to understand and prepare to meet the needs of millions of older adults, current and future. Public and private sectors are engaged in a dialogue to address the needs of a diverse ageing population; to promote their dignity and independence, and expand opportunities for current and future generations of older persons.

In India, over 90 million people are above 60 years of age. This is about 7.4% of the total population. The fear is that by 2021 it is estimated to grow to a whopping 140 million. In the state of Karnataka, 7.2% of the population is aged making it one of the top states in the country in this focus area. (Source: Situation Analysis Of The Elderly in India, June 2011).

The National Policy on Older Persons 1999 has set an agenda about what it proposes to do. The policy envisages state support to ensure financial and food security, healthcare, shelter and other needs like equitable share in development, protection against abuse and exploitation and availability of services for their well being, and has called for stakeholders, including the public, to decide what is sustainable and relevant, and what issues need addressing in the next decade. In the current scenario, issues that loom large are financial security, healthy ageing, long term services and supports, and elder justice. Firm commitment in tackling these pointers will definitely provide a better quality of life to our senior citizens.

In 2006, the United Nations General Assembly declared June 15th as “World Elder Abuse Awareness Day”. There is no beter time than now to discuss ways to combat this social malaise that has crept into our families and communities unchallenged.

What is elder abuse?

Elder abuse is a single or repeated act, or lack of appropriate action, occurring within any relationship where there is an expectation of trust which causes harm or distress to an older person.

In many parts of the world, elder abuse occurs with little recognition or response. Until recently, this serious social problem was hidden from the public view and considered mostly a private matter. Evidence is accumulating, however to indicate that elder abuse is an important public health and social problem.

Data shows that 50% of seniors in Indian experience abuse. Among Tier 1 cities, Delhi has the lowest (22%) and Bangalore has highest (75%). (Source: Report on Elder Abuse in India 2014)

All cases of abuse are not reported and the extent of elder mistreatment is unknown; however its social and moral significance is obvious. As such, it demands a global multifaceted response, one which focuses on protecting the rights of older persons.

Where does the abuse take place?

The different types of elder abuse

Physical abuse: Physical elder abuse is non-accidental use of force against an elderly person that results in physical pain, injury, or impairment. Such abuse includes not only physical assault such as hitting or shoving, but also the inappropriate use of drugs, restraints, or confinement.

Sexual abuse: Sexual elder abuse is contact with an elderly person without the elder’s consent. Such contact can involve sexual acts, or vulgarity.

Neglect or abandonment by caregivers: Elder neglect, failure to fulfill a caretaking obligation, constitutes more than half of all reported cases of elder abuse. It can be intentional or unintentional, based on factors such as ignorance or denial that an elderly charge needs as much care as he or she does.

Financial abuse: This involves unauthorised use of an elderly person’s funds or property, either by a caregiver or a relative. It involves misusing the elder’s accounts or credit cards, stealing cash, forging signatures, and investment frauds.

Signs and symptoms of elder abuse

If case you are an elder who would like to reach out for help, or if you know of an elderly person who is being abused, do not hesitate to call any of the help lines. Reaching out can link the elderly to services and resources, as well as connect them to professional help from medical specialists, counselors, legal advisors, NGOs, old age homes and other organisations working for elderly persons.

At first, you might not recognise or take seriously the signs of elder abuse. They may appear to be symptoms of dementia or signs of the elderly person’s frailty. In fact, many of the signs and symptoms of elder abuse do overlap with symptoms of mental deterioration, but that doesn’t mean you should dismiss them on the caregiver’s say-so. 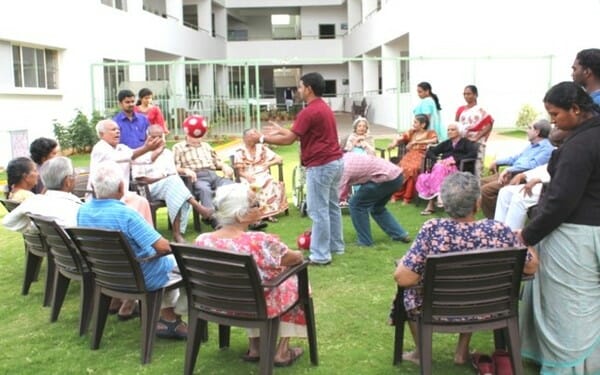 Residents at the Nightingales Centre for Ageing and Alzheimer’s gather around on the lawn for a support session.

Approaches to define detect and address elder abuse need to be placed within a cultural context and considered alongside culturally specific risk factors. For example, in some traditional societies, older widows are isolated and not allowed to socialise.

From a health and social perspective, unless both primary health care and social service sectors are well equipped to identify and deal with the problem, elder abuse will continue to be under diagnosed and overlooked.

What to do if your child is sexually abused
Helplines and support for women
Why elderly people in family go missing, and how to deal with it
Bangalore city and its elderly citizens

About Jayeeta Bose 1 Article
The author has not yet added any personal or biographical info to her or his author profile.

Carts of street food that offer a quick snack, little stalls selling just what you were looking for – street vendors are an integral part of life in Bengaluru. But why isn’t the government implementing the law that upholds their right to work?

Salt: Why less is more!

Too much salt can result in many problems, while too little can also do the same thing. Strike a balance with your salt intake!

A V-Day fight, to love and be fearless

Valentine’s Day now takes on a meaning much larger than what it was intended to be. Anoo Bhuyan tracks the recent events that lead to today’s One Billion Rising in Bengaluru.