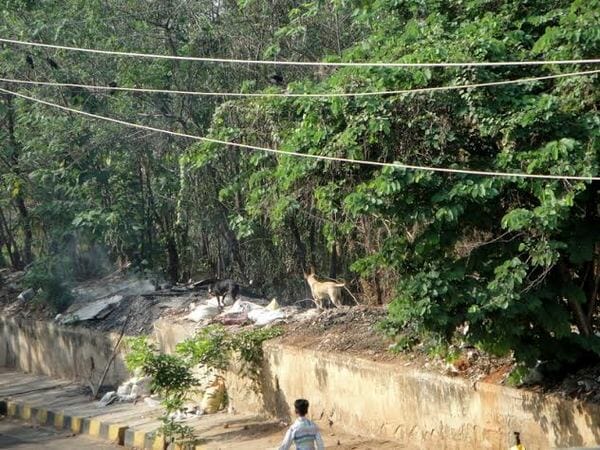 Dogs trying to figure out the source of stinking meat on Railway Parallel Road, Malleshwaram.

Some residents of Malleshwaram in Bengaluru noticed that there was a foul smell in the air one fine morning, after the first rains. They saw many bags lying around near the railway area on 11th main road. When they checked the bags, there was animal waste dumped by unknown persons, rotting and causing the smell.

Then how does the animal waste get disposed? What should be done to the waste? Citizen Matters tried to find some answers.

Where is the loophole?

BBMP bye-laws mandate that animals such as pigs, sheep, cows and goats are supposed to be slaughtered in slaughterhouses licenced by BBMP. The waste produced here is to be handled responsibly.

This law, made assuming that there will not be any animal waste anywhere other than the slaughterhouses, makes way for the smelly dumps like the above. There is no rule that caters to small meat shops that carry out butchering illegally.

While Health Inspectors of BBMP wards ignore such illegal activities for their own reasons, they don’t provide any official mechanism to dump animal waste, to such shops.

A meat shop owner who didn’t want to be named, told Citizen Matters: “Our waste is taken by a piggery for free. The days on which the piggery guy doesn’t come are a problem – we have to get rid of the waste by whatever means possible.”

This a regular phenomenon in Bangalore. Butchery waste is being dumped beside HSR Layout 27th Main Road, where pigs come and eat it regularly. The Health Inspector of the area turns a blind eye to this mess. Similarly in Vidyaranyapura, in M S Palya, while some residents butcher animals in their houses in order to sell, the consequences are borne by the other residents in the area. Here too, there is no regulation by the BBMP.

Nobody to keep the count

Can a meat shop owner slaughter animals? “Slaughtering one or two animals in the shop is allowed, when they have to meet the demand,” says Dr. B H Ramesh, Assistant Director, Animal Husbandry, BBMP West zone. However, “We don’t have account on how many animals in such shops are being butchered,” he adds.

This means that if a shop wants to cut more animals than permitted, it can do so illegally, and nobody keeps a count of it. But the onus of disposing the waste is on the meat shop itself – BBMP doesn’t take the responsibility.

One of the Assistant Directors said, “Since the present slaughter houses are small and the demand for meat is high, these petty meat shopkeepers bring animals from outside and cut them. Presently there is no way to stop this from happening. However, once the hi-tech slaughter house is put to use, this problem of small meat shops will be solved.”

When we asked what happens to the waste generated in the official slaughterhouses, officers told us that most of the waste is further segregated into edible or non-edible by-products, then the remaining is given to BBMP trucks, as they are within the municipal limits. In the areas where BBMP collection is not regular and piggery owners don’t come to collect the waste, the waste finds its way to the garbage dumps. 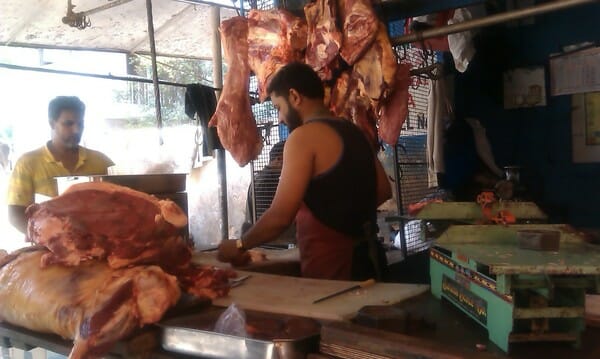 ‘Animal waste can be brought down to zero’

Waste generated from slaughterhouse has intestinal food remains, hair, skin, intestine, rumen, trimmings, bones, teeth and blood. If these are not disposed properly, they will rot and emit a foul smell.

Dr. Mohammad Nadeem Fairoze, Head of the Department, Livestock Production Technology, Institute of Animal Health and Veterinary Biologicals, Bangalore, says: “Waste generated after cutting of animals is always a question. However, such waste doesn’t go unused – at least not in organised or registered slaughter houses. Waste from animals can easily be brought down to zero.”

In 2010, Department of Animal Husbandry and Veterinary Services reported that 30% of the meat produced in Karnataka is consumed solely within Bangalore. In 2008-09, the total production of meat in the state annually was about 1,14,520 tonnes. Out of this, the city consumed 33,212 tonnes of red meat, 5,825 tonnes of poultry meat and 13,800 tonnes of mutton.

On an average, 15 to 20 percent of the slaughtered animal is waste. Dr. Parviz Ahmed Piran, ex-Joint Director of Animal Husbandry, BBMP estimates that 1,440 animals are slaughtered in the city slaughterhouses daily. Roughly about two tonnes of waste is generated per day in slaughter houses of the city, which may go up during weekends.

How should the animal waste be handled?

As per the rules of Municipal Solid Waste Management 2000, Chapter 5, SlaughterHouse Waste and Dead Animals drafted by the Ministry of Environment and Forest, slaughterhouse waste should be disposed by adopting various processes like rendering/ controlled incineration/ burial/ composting/ anaerobic digestion etc.

BBMP officials responsible for Solid Waste Management say that the animal waste from the slaughterhouse is not allowed to be mixed with the municipal waste. It should be carried separately. Municipal Waste Handling and Management Rules 2000 mandates that all the slaughterhouses should make provisions to manage their waste.

Waste produced in the government’s three slaughterhouses gets transported to different places for various purposes, while untreated waste water is discharged into the sewage lines, except at the slaughterhouse at Tannery Road which is the single slaughterhouse in the city to have an Effluent Treatment Plant (ETP).

Waste water from the slaughterhouse contain blood, droppings, fat and intestinal contents. Therefore the court ruled that this water be treated before letting it into municipality sewage lines.

The City Market slaughterhouse is small in size, and doesn’t have an ETP. Effluents from here are drained and let into sewage lines directly. A report from the Department of Ecology and Environment of Karnataka – 2003 said that this waste is similar to biomedical waste. It is infectious in nature and a bio-hazard.

Can slaughterhouse waste be harmful?

In 2004, residents of Tannery Road, unable to bear the foul smell emanating from the slaughterhouse nearby, filed a Public Interest Litigation in High Court of Karnataka. During the ongoing litigation the HC passed various orders:

1) It banned the use of blood by pharmaceutical companies and instead ordered that Effluent Treatment Plants (ETP) be installed.

2) It banned slaughterhouses within the city limits and ordered the set up of scientific, modern abattoirs on the outskirts of the city.

Over a decade has passed now. The first order to have ETP remains on paper, while the second is yet to be completed.

After a decade, abattoir still in pipeline

The construction of a modern slaughterhouse that could bring an end to illegal activities in the city is still in a nascent stage.

Dr Piran said,  “Construction of an abattoir (slaughter house) at Harohalli, near Kanakapura taluk is in process. Compound wall is being constructed.” The Slaughterhouse Union was unhappy with the previous location, Anekal, because of which the delay.

The hi-tech modern slaughterhouse will be built by Chennai Abattoirs Private Limited on 40 acres of land at Harohalli. The speciality of this would be that manual work will be minimised. Dr. K P Ramesh says, “No animal will be placed on ground while cutting, peeling or pressure washing as they will be hanged onto a mechanical trolley.” This modern slaughterhouse will ensure minimum pain to the animal. “Blood will be directly collected in aluminium drains which will be connected to ETP,” he added.

Non-edible items like rumen, intestines and trimmings are taken away to dumpyward at Mandur or taken by villagers from Hoskote and nearby villages for composting. Shahid, a meat shop owner at City Market, claims that bones and teeth are sold to BBMP for Rs 2 per kg which in turn is used for making Calcium or whitening sugar.

Meat shop owners also claim that some amount of animal fat is sold to private parties to make oil which is used in making soap. Skin is sent for leather-making while horns are used for making buttons. Long feathers of chickens are used for making shuttle cock, while small feathers and other remains of the chicken and other animals are mostly given to piggeries or used in preparing fish food for carnivorous fish. (To read about other purposes that animal waste is used for, click here )

Dr. Piran denies BBMP’s involvement in bone-trading activity. He adds that bones or teeth are purchased by private parties to make gelatin or calcium. Sometimes bones are purchased by dog owners to make food for dogs.

No expert had a perfect answer for this. At present, meat waste from households is still considered as wet waste. One can use it as dog food, if required. Karnataka Compost Development Corporation does not prefer accepting non-veg waste. However, they are not able to make out whether what comes to their doorstep has non-veg waste or not, and simply accept what comes through.

Animal waste is compostable, but composting has its own pitfalls. Hence the easy composting systems available right now don’t suggest composting of animal waste. One of the reasons that an Easy Composting website cites for the delay in decomposition of meat is the oil present in it, which delays the decomposition. It also attracts rodents. The worms that facilitate composting do not touch the meat, and sometimes are driven away. This meat may not be completely broken down, and the compost might contain non-decomposed chunks of meat because of this.

The Easy Composting website and Hasiru Usiru Dala Co- founder Nalini Shekhar recommend crushing of bones before composting, if they are composted.

The long saga for commuters across the Whitefield railway line in Kadugodi may yet end, with safety approval granted just this week. A top site engineer asks citizens to wait for another 2½ months for the bridge to be opened.