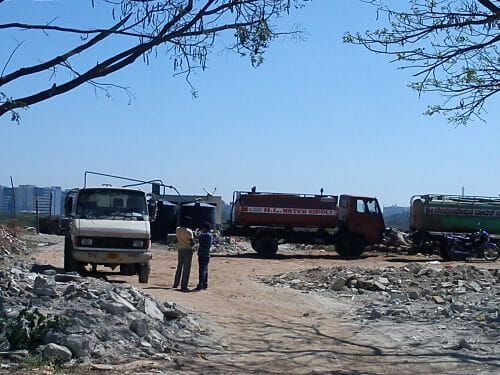 A water tanker collects water from a borewell next to Bellandur lake, whose water is contaminated according to tests by the Pollution Control Board. Pic: Meera K.

The terms ‘water tankers’ and ‘water mafia’ are not new to an average Bangalorean. Neither is the knowledge that a vast part of the namma Bengaluru depends on the water they supply. Some of us like to believe the public authorities when they try to deny the existence of ‘mafia’ in managing water or garbage but their existence is a reality. Have you ever tried to understand how water mafias exercise a form of ‘public authority,’ by controlling the water supply?

Malini Ranganathan’s scholarly article ‘Mafias’ in the Waterscape: Urban Informality and Everyday Public Authority in Bangalore published in www.water-alternatives.org Volume 7, issue 1, investigates the ‘phenomenon of, and mythology surrounding, water mafias in Bangalore.’ Dr. Malini Ranganathan is an assistant Professor School of International Service in American University, and an interdisciplinary urban geographer with a special interest in post-colonial theory and urbanism.

In this edited piece, Citizen Matters tries to capture the essence of her article where she defines the water mafia as, “a merry coalition of thugs, local politicians and even some water department employees (that) run a parallel and private water supply network that borders on the extortionist.”

Water tanker operators are often backed by the local corporator, the legislator, or a powerful politician. In some cases, political patronage is open. In others, patrons operate in the shadows. The mafia has strictly demarcated territories. What is less clear is how mafia authority is enacted and maintained and, in particular, the relationship mafias share with ‘the state.’

Constructions on the outskirts boost the mafia

Approximately 90% of residential settlements at Bangaloreʼs periphery – around 500 square km and a population of two million – have developed the way they have, and considered ‘unauthorised,’ as the Bangalore Development Authority does not recognise them.

Over time, some residential layouts acquire greater legitimacy than others through the exercise of public authority – the acceptance of property taxes paid by informal residents by the local government, tacit sanction from an urban authority, investment in roads or water supply by a local politician, or protection offered through networks of political actors.

In reality, all settlements exhibit varying shades of legality and tenure security, depending on the sanctioning authority. In fact, even so-called formal BDA layouts possess varying shades of legality. It is in such fluid and open-ended conditions that water tanker mafias have been able to flourish and service the majority of peripheral settlers.

‘Mafia’ tends to be a colloquial term for a range of practices and informal setups which are collusive and exploitative; but they can also be protective and welfare-providing. Residents maintain checks and balances on the rent-seeking habits of tanker operators, and that the stiff competition between tanker businesses within a service area acts to dampen price gouging, forcing prices to remain predictable for loyal customers.

Social protection, the provision of welfare, electoral lobbying, and the facilitation of unauthorised land sales to lower middle class buyers are all part of a repertoire of mafia political activities.

The key to the success of mafias is their complicity in both water and land regimes. From the early 1990s, the deregulation of land has fostered crony capitalism in the real estate sector, and has provided ample opportunity for speculative and exploitative land deals. This has further bolstered the authority of water mafias.

While in the so-called ‘authorised’ areas of the city, the BWSSB services approximately 5 lakh domestic connections with 900 million litres a day of treated water from the Cauvery River, only 10-30% of households at the city periphery have access to BWSSBʼs water. Here, most depend almost entirely on groundwater sourced from household bore wells, municipal or village bore wells, and water tanker mafias to meet their domestic needs.

The absence of groundwater regulation has encouraged households, apartment complexes, commercial establishments and water tanker businesses to tap the aquifer quite indiscriminately. It is estimated that over 600 million litres of groundwater are consumed per day in Bangalore, which is approximately half of BWSSBʼs water supply. Over the years, water table has plummeted.

While there is some public information about the number of domestic bore wells, there is nothing on public domain on where tanker businesses source their groundwater from, how much they earn per day, and how many customers they service per day are largely anecdotal. An estimate by the BWSSB suggests that there are around 200 private water tanker businesses in the city, each operating two to three tankers.

Some interesting points about ‘the Mafia’

This price works out to around five times the cost of BWSSBʼs water. A household of five usually requires one to two tanker loads a week. Tankers also sell water by the pot to residents who are too poor to own houses with water storage facilities.

Running a tanker business can be lucrative. The inputs are virtually free. On a typical day, a tanker owner operating in a densely populated residential area can make around Rs 8,000-12,000 depending on how many tankers he owns. If the business is able to pump groundwater through subsidised electricity or diesel-powered generators, the only cost is the diesel required to fuel trucks or tractors. Since diesel is also subsidised, profit margins can be quite substantial.

However, it is important to keep in mind that competition can be stiff. While businesses agree to operate in demarcated territories, in reality multiple operators compete for customers within a particular area. This is why it becomes important for tanker operators to cultivate a strong rapport with their customers and cut deals with them in order to foster loyalty. Prices also vary depending on location.

The author spoke to many tanker operators and valve men to understand boundary-making and breaking that kept them in power. Some tanker operators describe themselves as “social workers” who claim to do other work in addition to supplying water to the areas ignored by authorities unlike money-guzzling representatives of the city corporation. Their stance on administration is not uniform. They do have “friends” in the administration and elected representatives who support them and whose protection and patronage they enjoy.

Cut the water supply, so that tankers can make merry!

As we said earlier, tanker operators also have to fiercely guard their turf from other operators who compete for customers and collude with other local sovereigns and government officials. These mafia operators also reward customer loyalty, particularly to the customers belonging to castes and linguistic backgrounds that are similar to them. Customers who are loyal to them are rewarded with discounts.

The valveman also suggest that the operators collude with lower-level officials to restrict water supply so that they could offer the alternative and payments from consumers were shared with these officials. An operator admits honestly: “No difference between a politician and people like us…. once you have money, you can get power and become something, and once you have power you can get more money. Power is very necessary. Today I have some power!”

Malini Ranganathan wonders how a water tanker vendor can also become a social activist. Excerpt from the article:

“In the summer of 2008, I found myself deep in conversation with Santosh, the owner of a local water tanker business at the northernmost peripheries of Bangalore. As we sat in his small office, Santosh spoke to me about the civic woes of this unauthorised peripheral area – its lack of piped water, roads and sanitation, for instance, and the ineptitude of its municipal officials – as well as his efforts to improve things through what he called his ‘social work’.
At one point in the conversation, he leaned forward, lowered his voice, and said gravely to me using the third person “the water mafia is active here.” I blinked at the poster on the wall behind his desk advertising his tanker business and then back at him wondering to myself if Santosh was not part of the water mafia. As the Indian Express quote suggests, most tanker businesses were popularly dubbed part of Bangaloreʼs ‘water mafia’. If so, how was it that Santosh identified himself as a social activist?”.

A water tanker vendor, or an “activist”?

It is important to recognise that mafias engage in far more activities than in money making. The author spoke to Santosh, a tanker operator who calls himself a “social worker.” He explains that ‘social work’ is him doing things for his locality. Since he had ‘strong contacts’ in the local government, he could ‘pressurise’ them to fix roads and streetlights and even threaten lower rung officials if necessary.

Santosh claims to be trying to increase transparency in local government by leveraging the Right to Information (RTI) Act – he had a stack of applications he had filed under RTI. This tanker operator had budgetary records, and points out where funds had ostensibly been spent, but no civic improvements had transpired. He has a monthly ‘news bulletin’ in which he documents such information about local government expenditures that he circulates for free to his neighbours and constituents.

By filing RTI applications and disseminating this information, he mimics good governance practices and points out that as a respected (and somewhat feared) ‘activist,’ his work prevented his area from spiraling into ‘a mess,’ a morass of bureaucratic corruption and civic woes.

At the time of elections, operators work with politicians whose patronage they enjoy, and provide tanker water for free to their constituents. There have been cases where politicians have advertised on tankers claiming they are responsible in providing water free of cost to the constituents. Operators count on customers being loyal to them to translate into votes for the politician they support.

This makes sense if we consider that to extract groundwater, one must have access to the land containing it; the greater the access to land, therefore, the greater the likelihood of being able to access and sell groundwater. Transacting in both water and land is a way for water mafias to maintain strong ties to local landed politicians in the area, while also increasing their sphere of influence among residents of a similar cultural and class background.

Though the research might be a little old and the names mentioned here may not be relevant now, this is the way water availability runs even today, in most of the newly added areas in Bengaluru. So the next time your BWSSB water supply runs dry, it is worth pondering about the reasons!

Pay BWSSB contractor to reconnect sewage line, or live with stink
Water tankers rule, no one to question
One apartment wastes water, another pays
Take the first step in managing your water supply efficiently!
Water meters reduce water wastage in my flat
No water for peripheral areas of Bangalore: Gaurav Gupta
Tanker water prices up, apartments in distress
How much are you paying for your tanker water?

Ananth Kumar: A lookback on promises and achievements

Bangalore South MP, though is very vocal in Parliament, seems to be unable to connect with his electorate back home effectively. Read more!

KSPCB slaps notices and cases against 331 polluters in the state, BWSSB plans to increase water tariff by 15 percent, schools ask students to carry lighter bags – read more on what has been happening in Bengaluru this week

From banning domestic workers to forcing additional quarantine on residents, many RWAs have made their own rules. The legality of these rules is highly questionable, but BBMP Commissioner says he won’t interfere.