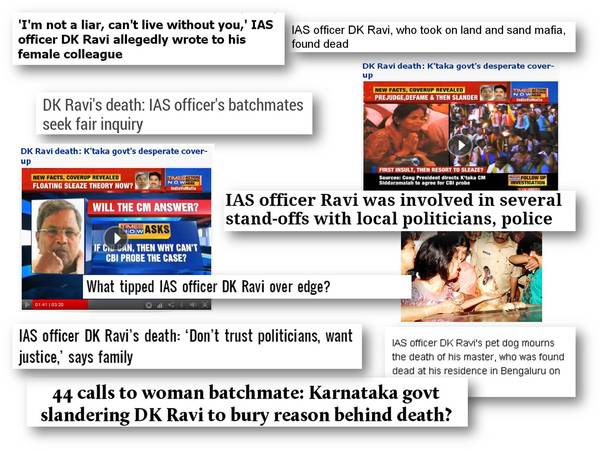 Add one frustrated public and the death of an honest officer in ‘mysterious circumstances’ and a system perceived as corrupt, and what does it equal? Mass speculation, sensationalised reporting, and public outrage.

D K Ravi was an accomplished man. He came from a poor background, educated himself and achieved a position of power. Depending on which media outlet one follows, one can assume that he was an honest man, fighting against corruption, or a man involved in infidelity and deceit. However, there is no doubt that the public loved him. The day after his death was announced, the streets of Bengaluru were filled with protests and the media overflowed with news.

The public was deeply upset by the death of an honest officer and the media reflected that. In the last couple of weeks, hundred of articles have been circulated, offering information about his last known whereabouts, phone calls and text messages, and details of his death. This information is paralleled with reports on his life story and successful fight against the corrupt. Also interspersed are stories of a female batchmate, missed calls, marital issues, large sums of money and hotel rooms. The media did its job and gave a voice to the public’s speculations about the reported suicide, but it went above and beyond, when it started circulating conspiracy theories and scandal.

It impassioned the public and focused emotional upset against the government and CID reports. The first couple of days following his demise, news consumers could not escape the images of Ravi’s family grieving. Special attention was given to the despair of his dog at his funeral. Local news channels aired numerous specials on his life and death. The programs embellished with dramatic music and emotive claims. The media made Ravi out to be more than just a civil servant; they made him out to be a civil superhero.

One News9 report states, “He was a messiah for the poor. For him, work was worship. And for the corrupt, he was a living nightmare. He used to hunt down those who dared to go against the legal system.” This particular special gives the impression of a comic book hero, and with all the melodrama, Ravi could easily be confused with a politically interested version of Batman.

However, for many people watching the news and following the case, Ravi was like Batman. The public wholeheartedly rejected the notion that he could have taken his own life, because he was much more than an average man. Individuals who take a stance against the corruption in the system are given an elevated position by the public. And people are so accustomed to the government’s lies and cover-ups that they refused to believe anything that the CID report released about Ravi. Many newspaper articles encouraged speculation and hysterics by posing unanswerable questions. There was a loud outcry for a CBI probe from the public who were too sceptical of state-government involvement.

There is no better example of the media’s sensationalism than the Newshour Debate hosted by Arnob Goswami on Times Now. Newshour Debates are generally a boxing ring that positions the wronged against the wrong and, in Ravi’s case, in one corner sat The Congress Party and in the other corner sat everyone else. Goswami did a wonderful job of making sure the Congress representative tapped out, every time.

He blew up the questions about the suicide note; the unprotected crime scene, the ‘prima facie case of suicide’ statement by Police Commissioner M N Reddi, the intentional ‘leaks’ from the police, the delayed transfer to the CBI and obvious political involvement in the investigation. He then reconstructed all those questions into one giant finger pointing at the government and its ‘shady’ activities. The Newshour Debates certainly raised the blood pressure of its guests and its audience.

The majority of Indians feel that Ravi was manipulated to his death. They say there was too much political involvement in the investigation for it to simply be what it appeared to be. Or so it seemed. There is also a history of honest officers being murdered that leaves plenty of room for doubt. The media helped shape this understanding and kept the anger burning in the public’s eyes.

But in the end, what the public outcry to the death of Ravi boils down to is the public’s frustration with the corrupt government systems. The unclear circumstances of his death gave the people an opportunity to display their lack of trust and outrage. The media used these frustrations to fill their pages and air times and the public reacted accordingly.

IAS officials demand CBI probe into D K Ravi’s death
Lessons for the anti-corruption brigade from DK Ravi’s death
DK Ravi’s untimely death: Why we ought to know the reason

About Eden Ezsak 3 Articles
Eden Ezsak is an undergraduate student at the University of Illinois studying Communication and Global Studies. She was an intern at Citizen Matters.

Why is BMTC raising ticket prices? Is it that they are not managing their revenues or functioning efficiently?

At the High Court: What is defection?

After the ruckus at Vidhana Soudha on October 11th, dissident BJP and Independent MLAs have taken the matter of their disqualification to court. The question of what membership and defection really constitute is going to be tested hard.

Love of books brings these hundred people together at the Catholic Club. Founder of iBrowse shares her experience.