Now an annual fest at namma Turahalli forest, Turahalli Day was celebrated on December 6th 2015. The day began by around 6.30 am with people gathering under the banyan tree.

Ganeshram and Anurag, who were there to go on a plant walk, were already in a ‘taxonomic’ discussion with Ravee. A few others joined them and off they went on a green path. Here’s the highlight of the plant walk, in Ganeshram’s words: “One of the topics that was underlying the whole walk was the importance of forests and native flora and how it affects us. The other was how knowledge can change the way we view the world –Indigofera linnaei & Crotalaria pusilla brought about that effect. The edible berries were relished by one and all, as were the Ficus stories.” Sigh… If only I was Hermione Granger; I would’ve used a time turner and walked with both the groups, one watching plants and the other watching birds. 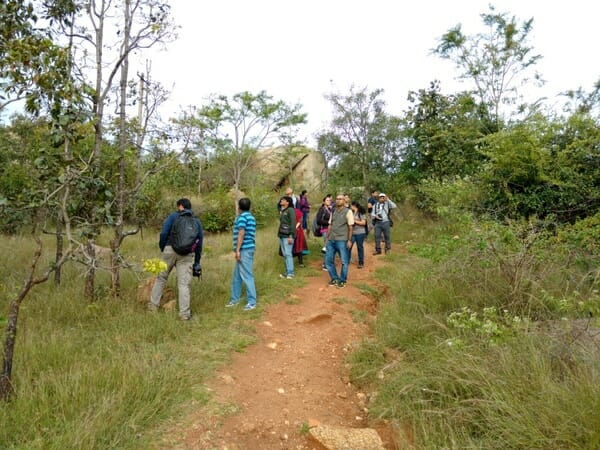 I joined Prashanth Badarinath and other bird watchers as we headed towards the Shani temple. Early morning calls of the Spotted Owlets, observing a Black-naped Oriole behind the banyan tree, soon to find an Indian Golden Oriole on the same branch; the birding activity was picking up already. As we moved up the hill, we stopped to watch a Booted Eagle glide by. Watching it almost eye-level, we could spot the different characteristics of the bird. As the group walked down the trail and turned right at one of the eucalyptus patches, we came across a flock of Olive-backed Pipits. It was here that we stopped and had a long discussion about Turahalli, the last lung space of Bangalore, the threats it faces, and why it is important to help in retaining it the way it is. 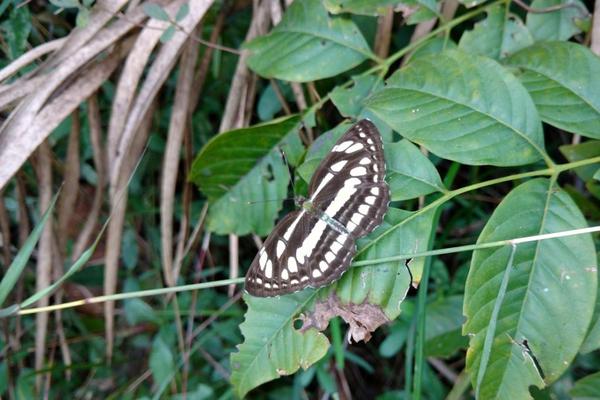 We walked on, observing bugs, beetles and butterflies on the way. Near the other temple, a small puddle amidst the rocks treated us to a few Common Skittering Frogs. A chirpy little girl in our group quickly memorised the name and enthusiastically counted the number of frogs, reporting it to her mother 🙂 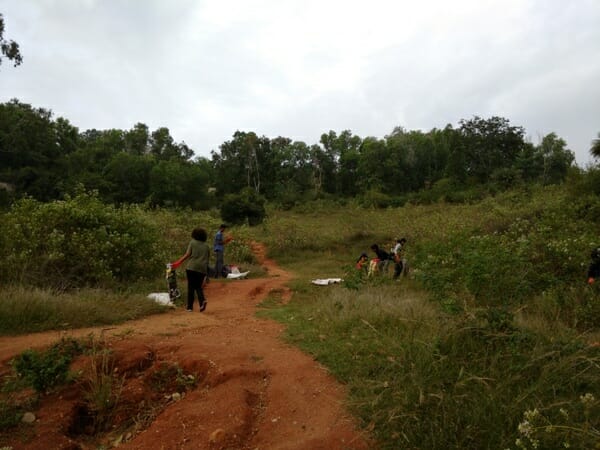 The highlight of the day was the large number of volunteers cleaning up the forest. Vinay Kothari and others, including many children, had gathered bags and bags of garbage, some of which were transported out on two wheelers. 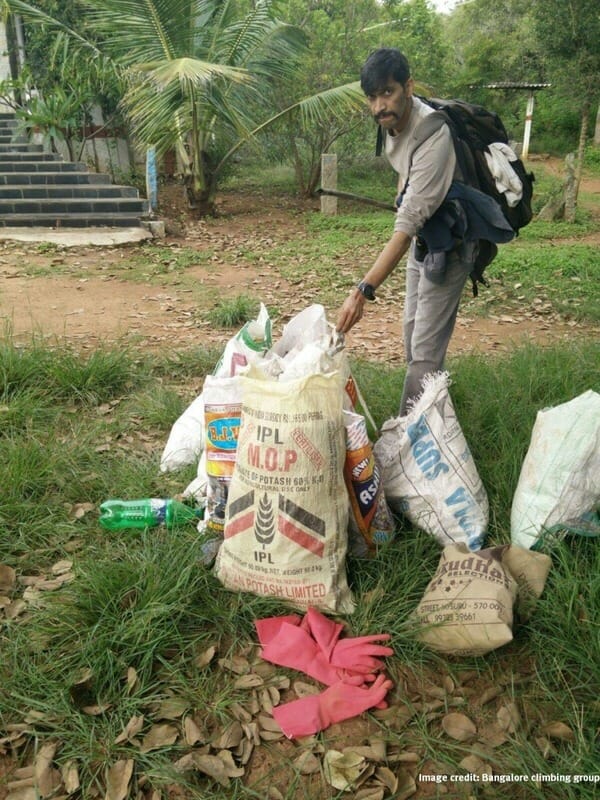 Some portion of the 150 kg of waste picked up. Pic: Bangalore Climbing Group 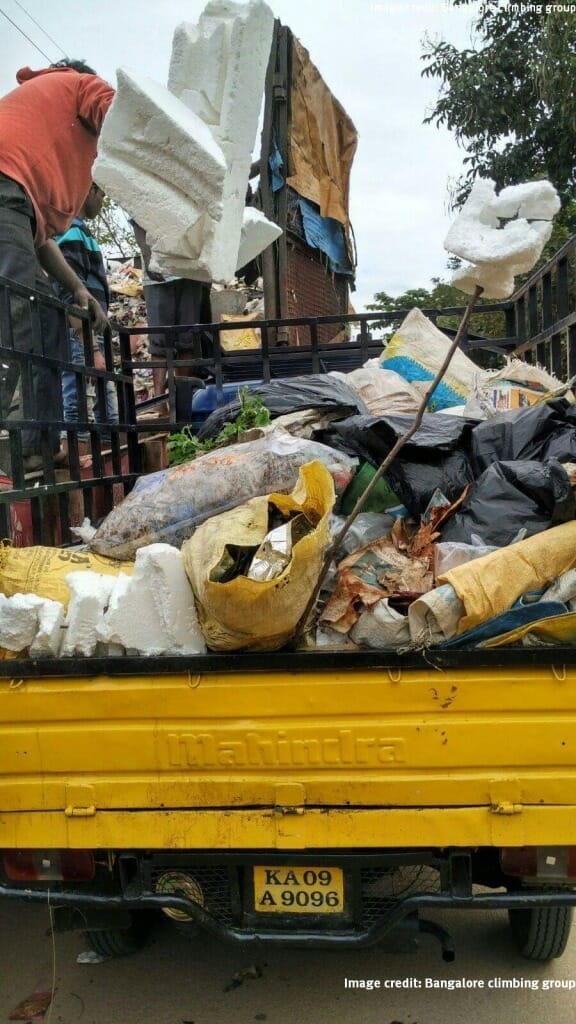 The BBMP van which came to pick up the garbage. Pic: Bangalore Climbing Group

In fact, we were pleasantly surprised to see a BBMP auto that had come in to take out the rest of the garbage. Turahalli was a much, much cleaner place on December 6th, with nearly 150 kg of garbage transported out of the forest, thanks to all these volunteers. 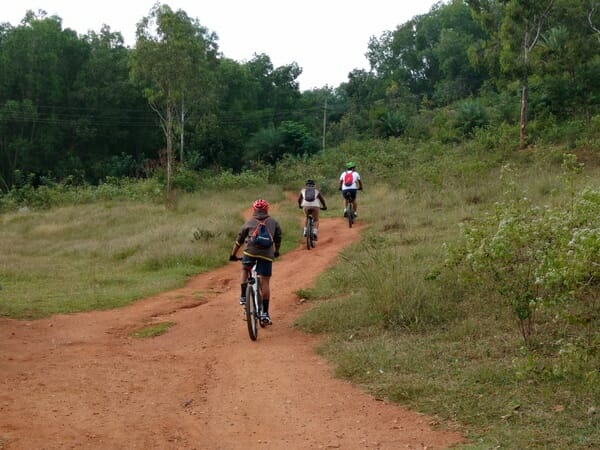 Standing on top of the hill, we were soaking in the breeze and the view, while a line of cyclists wearing green and black moved across in single file and disappeared into the forest. 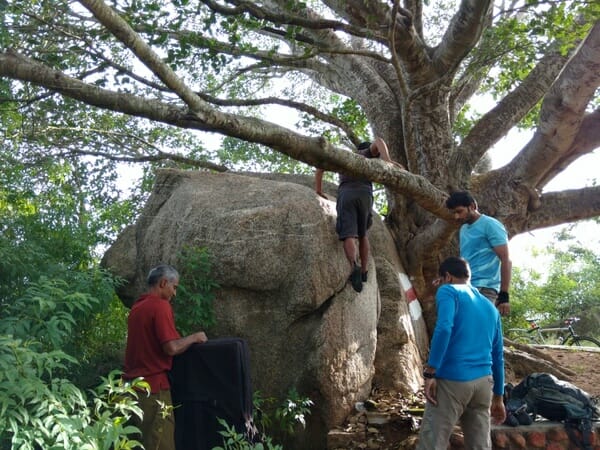 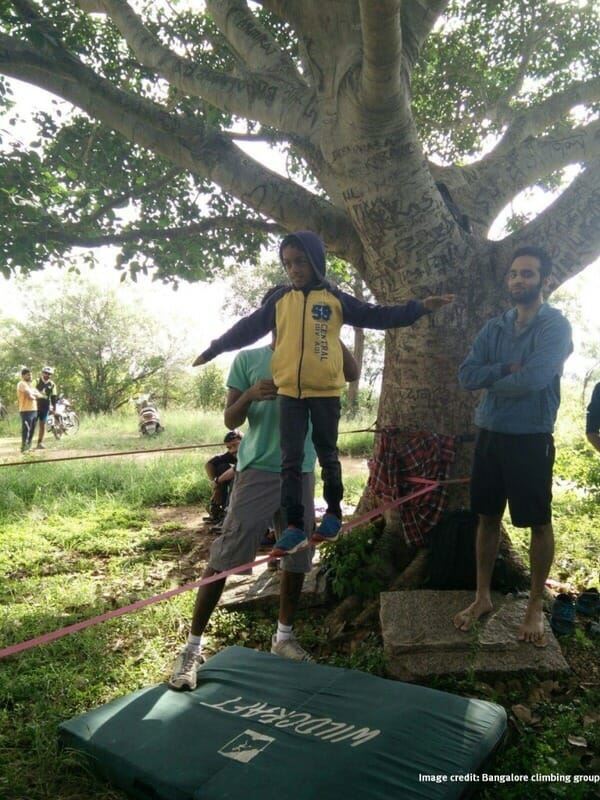 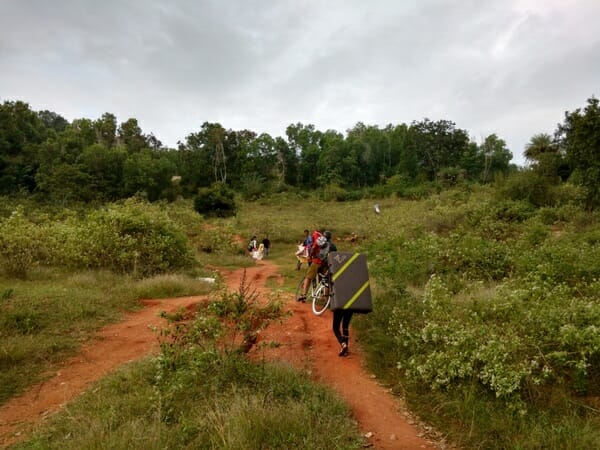 Back at the Shani temple, we met Sohan Pavuluri and other rock climbers, an extremely passionate bunch of people that regularly visits Turahalli. All along the route, there were different groups of people climbing rocks. The pros reminded us of Spiderman, while in parallel they continued to lend a helping hand and a useful tip to the first-timers. The climbers always say that Turahalli is their second home. They proved why the forest is so close to their hearts. 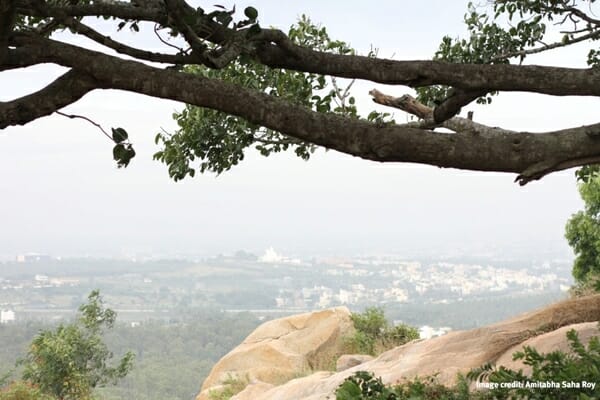 A view of Bengaluru city in the distance. Pic: Amitabha Saha Roy

Everybody who was there, busy in their own activity, left the forest much cleaner. This was one celebration where there was no noise. And just when that thought came to my mind, two bikers revved up their engines and zipped past us. They were definitely not part of Turahalli Day; they were instead there to wake us up and remind us that Turahalli needs our support against the likes of them.

About Sugandhi G 2 Articles
The author has not yet added any personal or biographical info to her or his author profile.

Let there be (LED) light!

What makes LED lights special and effective power-savers? Why are they preferred over sodium bulbs or CFL bulbs? Read on.

I will keep working for people: Michael Fernandes

In an interview to Citizen Matters, veteran politician, BPAC-endorsed candidate for Sarvagna Nagar Michael Fernandes unravels his plans for his constituency if he wins the elections.

“Widening well-developed roads is not development”

So say south Bangaloreans, on the BBMP’s widening plans for the Outer Ring Road between Silk Board and Mysore Road. Meet B N Venkatesh Murthy who offers alternatives and fiercely criticises the administration.