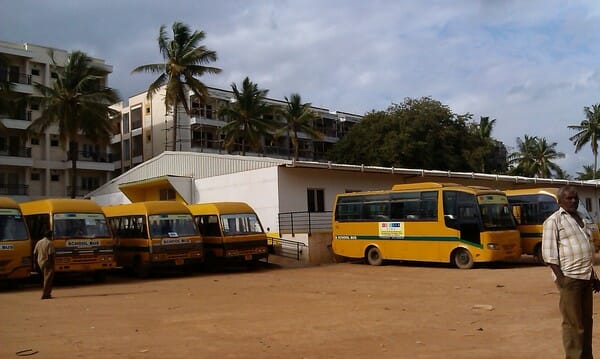 School might lose its recognition if the ISCE board considers the State government’s request. Pic: Nikita Malusare

“The Department has viewed seriously on a sexual assault on a child studying in that [Vibgyor] school and hence Deputy Director for Public Instruction, South, is instructed to enquire about the incidence and it is in progress.

Mohamman Mohsin, when asked about the fate of the students, is understood to have said, “We will ensure that no student is affected by the process. If the ICSE board cancels the licence, then we will ensure that the students are accommodated in schools close by. We have to understand that safety of children is paramount. It cannot be compromised and I think parents will agree with me,” as quoted by Bangalore Mirror.

‘Revoking the permission not a solution’

Lack of communication between the government and Vibgyor parents seemed to cause some tension, as parents were not aware of how the state wanted to address the issue of the admission of 4000 students. The financial loss and the possibility of the students not getting admission in other schools at this point of time seemed to be the cause of concern for most parents.

Raghukumar, a parent of Vibgyor High students and an active citizen who lives in Thubarahalli, is disappointed. “Revoking licence of the school is not the solution. Such issues may be happening in many places, unknown to us. Government needs to get into the root cause. If some psychopath wants to do such things, it is difficult to stop. We need to create more awareness. The punishment should be more. Every corporate and schools should come out with more safety measures,” he said.

“This is going to spoil an [educational] year of children, they may not get admission in other schools. I request Government to not to take these kind of steps,” said Raghukumar, adding that other schools will not charge less, though parents have already paid the fee in Vibgyor High.

He said a school cannot be judged with bad incidents alone. This decision is going to create more chaos, he added, clarifying that parents intended more towards bringing better measures to ensure safety. “We are sure after this they will be more careful and take more steps,” he said.

Bindu Puttaswamy, another parent, was shocked to hear the news. “This is a second blow to a lot of parents. Firstly the issue is not even addressed. The police hasn’t come to a conclusion yet. There has been neither been any direction from the management nor from the police on the investigation. We have made a payment of approximately Rs. 70,000 for this first term. It’s a very tricky situation,” she said.

“Oh no! This could have happened in any school. It is not the matter of only school, it is matter of many children already studying in the school, especially what about the kids who are in 9th and the 10th grade who shall appear for the board exams soon,” said Devyani Bagchi, mother of a 6th grade child studying in Vibgyor.

She questioned the role of Education Department. “How could they let the things go so far? State government must monitor these schools. How did they allow outsourcing of the staff? How only this school is at fault when there have been incidents in other schools too?” she questioned, pointing to two other schools where a rape and kidnap took place but the government did not take any action against the schools.

“Just because this incident has been hyped by media, the government is planning to take a step in hurry. Children will suffer at large. Think what will every child go through when he/ she is sent to another school and gets teased by the children. For me investment doesn’t matter, what matters is the emotion of the child – how will you handle that?” she added.

Pradeep Anand, another parent, voiced his concern on Vibgyor High – Marathalli – Parents Facebook page. He said that their fight was intended to punish the culprits as soon as possible, to get the school to own the incident and cooperate with the police and parents, and to increase preventive security measures to ensure the kids were safe. None of the parents want the school to be closed permanently, as around 4,000 children will suffer because of this.

‘ISCE may not listen to State’

Nagasimha G Rao, Director of Child Rights Trust, an NGO, was doubtful about the State’s request being honoured by the ISCE board. “ICSE board runs under the central government. Therefore even when the State government writes several letters to the ICSE schools, it falls on deaf ears. They know State government can’t do anything, therefore they run their own mafia. The Block Officer is not even allowed to step into the schools to monitor their working.”

He added: “If the State has planned to cancel their license, then they should first relocate the students into some other school. Children’s education should be their priority. Later comes the punishment to the school. We shouldn’t react to the situation, we should bring about the best solution.”

Nitya Ramakrishnan, co-founder of Whitefield Rising, had this to say: “There is no question that the law must be enforced and all involved must be given the prescribed punishment. And all this needs to be fast-tracked. Where collective good comes over personal good, only then can we be a better society. It is more important to do the right thing,” she said, hoping that existing schools step up and announce that they will take in the kids, in case the license is revoked.

On Saturday, many protests took place on the school premises. Activists of Akhila Bharata Vidyarthi Parishad (ABVP), a right wing student federation, held a protest showcasing the ABVP flags. There was also a candlelight march by many concerned parents. There were many petty local politicians seen on the premises of the school. There are many protests planned near the school and other parts of the city, on Saturday.

Notably, Mahadevpura MLA Aravind Limbavali conducted a meeting with a few concerned parents and expressed his support to the Vibgyor parents. Meanwhile the school remained closed on Friday too. The school has promised to conduct a meeting on July 22, with parents and the Education Department officials, on the way forward.

Classic case of state poking its nose into BBMP: Will Bengaluru have advertisement hoardings?

Balaji Kutty shares his experience of working with government school students who battle again great odds to progress in life.