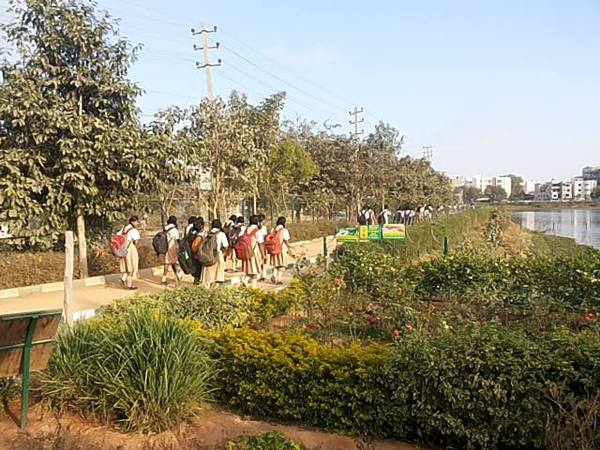 The anger of not just parents in Bengaluru, but that of all adults concerned with the safety of children plays out through media and talk shows, through demonstrations and protest walks. As outraged parents and civil society groups meet government officials and senior police officers, school administrators and lawyers, there is deep satisfaction that everybody is taking this incident with the seriousness it deserves.

The parents have put forth a 40-point charter for child safety standards which they want schools to follow. It includes trained security staff, CCTVs in all corridors, teachers watching over students during breaks. It insists on police verification of all new staff and background check of all outsourced workers. This will cost money, which will be passed on to the parents in the form of increased fees or maybe a ‘child safety fund’!

Of course, the parents are willing to pay the cost. Their children’s safety has no price and is non-negotiable.

Another story buried in history

But last year too, a little girl was raped by a van driver in the school grounds. There was furore, parents got together, met the police commissioner and head of the Department of Public Education. There was a felt need for school safety practices and policies.

The proposals were made by the government, but never reached the schools or the Education Department officials. There were protests. In fact, the management quickly handed over the school to another person and washed its hands off the matter. A month or so later, the case vanished from the social consciousness.

The perpetrator is in jail awaiting trial and the police have been as helpful as possible within a medico-legal system which is basically hostile to the child.

I have a concern. Throughout the year, there are multiple cases of child abuse, sometimes even resulting in death, burns or severe disability. There are brief reports on page 3 or 5. Other than a sense of “what is our country coming to? How can people be so depraved to commit such a crime?”, we don’t do anything — we just turn the page of the newspaper.

Is it because they are children of slum-dwellers, construction workers, single mothers struggling to make two ends meet through back-breaking work from dawn to dusk?

They are not ‘us’. The parents are often illiterate. They have no access to social networks like Facebook and Twitter. They fight a lonely battle. Whether it is the media or the police or the doctors or the lawyers, they will get a completely different treatment. Their time is not important as they are casual labourers, right?

The corporate parent has more clout, more ears in high places. He knows how to act against a functionary who is negligent in his work. Yet this parent’s bosses will be lenient to him, support his need to leave work unfinished to fight for the cause of his child’s safety, cover for him, certainly not cut his salary or his bonus.

Nobody gives a damn about the labourer or the garment factory worker. As the mother or father run from courts to counsellors to police stations, they will lose their jobs, lose their income and will be berated by their employers.

When educated empowered parents fight for their children, teachers are arrested, management is sacked and parents can afford to move the child to another school. When a poor parent reports against a teacher in school, nothing happens to the teacher or the school, but the child ends up victimised, isolated and derided. Scared to go to school or face his or her peers, the child drops out of the education system. The parents are rarely able to pay for another school.

Can we have an inclusive system that cares for every child?

So I am asking a favour. Whatever changes we build into the system, the ones we as civil society are pressurising the system to implement – can they include those who cannot fight for themselves as they have neither money nor voice?

Can we demand toilets in government schools, doors on toilets, guards who will prevent strangers from entering the schools? Because that’s where many of the sexual assaults occur. This is why girl children are pulled out of school and then fall prey to abusers at home or at the workplace.

Sometimes the only ones who create a noise when poor illiterate children are harassed are the politicians. But the same MP or MLA who blocks legislations and holds protests and thunders about the safety of women and children from his or her podium, will deny reports of abuse when he or she is in power. Are they using child abuse as a stick to beat the government, without care or respect for the child and the family?

Can we look at parents’ organisations who will fight for any child irrespective of their caste, community, religion or financial status? Can we insist on strict protocols for all children who have undergone abuse, so that the education and the finances of the parents do not affect the outcome of the case and the sensitivity with which it is handled? Who will put their might behind every child who is facing abuse in schools?

About Shaibya Saldanha 1 Article
The author has not yet added any personal or biographical info to her or his author profile.

The shortfall in revenue collection has become a problem for BBMP. How is it impacting the budget?

Every mayor wants to clean-up KR Market. G Padmavathi’s challenge is no mean task as this photo essay shows.

Interview: “Feeding of any animal, including stray dogs, in public places should be stopped”

Interview: Conservation biologist Dr Abi T Vanak weighs in on how Bengaluru can deal with the issue of stray dogs, monkeys and other wildlife in the city.