The World Environment Day was celebrated amid much excitement and joy by school children and volunteers which was organised by Bengaluru-based NGO United Way Bengaluru and BBMP.

Nearly 150 children from Sadguru Sainath School, 50 volunteers and team members of United Way Bengaluru came together to plant 600 saplings at Kudlu Doddakere near Kudlu. The 40-acre lake which was recently fenced, gated and had a walk path constructed was adopted by United Way Bengaluru under their ‘Wake the Lake’ Campaign. 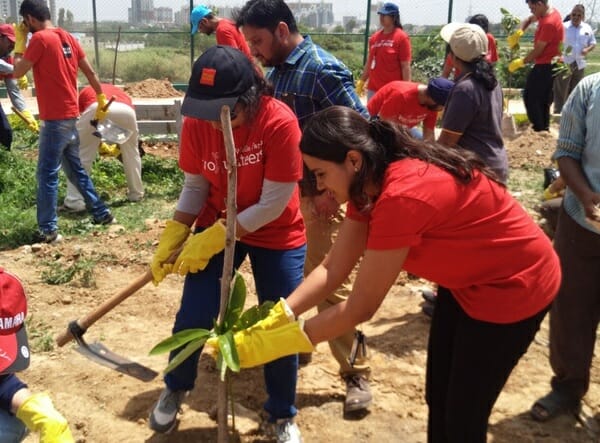 On the occasion Manish Michael, CEO of United Way Bengaluru, said: “While many may assign the responsibilities of our children to the future by saying “Children are our Future”, let’s not forget they are part of our present too – dynamic, vibrant, bursting with ideas, enthusiasm, eager and always ready to contribute their bit to the society. They are ready to take action work now, and not just wait for the future!”

Addressing the enthusiastic students, he said, “You have to become guardians of the lake, plant more trees, ensure that nobody is dumping garbage and ensure that this lake is protected. Today, we are planting 600 saplings today. Your principal has agreed that you all will visit the lake once in a month and ensure that the saplings are being nurtured and maintained well.”

The plantation drive is part of United Way Bengaluru’s week-long celebration from June 3rd to June 10th where 10,000 saplings will be planted across eight lakes in Bengaluru. The celebrations commenced on 3rd June with over 1000 corporate volunteers dispersing 50,000 seed balls at the Bangalore University Campus. On the subsequent days, ‘Namma Ooru, Namma Kere’ which will be celebrated at the lakes with planting and cleaning drive at Uttarahalli Lake, Kudlu Doddakere, Munnekolala, Singasandra, Sheegehalli, Kaudenahalli lakes.

Priyanka Mohan, one of the volunteers said, “It was an amazing experience to participate in the World Environment Celebrations. We all worked very hard and even the blazing sun didn’t deter us. We worked in teams and planted all the saplings. After putting the sapling in the pits, we covered them in red mud, filled up the pits and then watered them. I can’t wait to come back after a few months to see how they flourish. I hope to participate in many more such tree plantation drives.”

Realizing the important role of lakes in Bengaluru, United Way Bengaluru launched “Wake the Lake” campaign in 2011 to support rejuvenation work initiated by the BBMP. Over the years the partnership has resulted in the restoration of 14 lakes in the city which include Kaikondranahalli Lake, Kaudenahalli Lake, Uttarahalli Lake, Saulakere, Kundanahalli Lake and most recently Rachanehalli Lake. The campaign has been instrumental in developing a model to engage Government, corporate houses, volunteers, students and community members towards lake rejuvenation projects in Bengaluru.

United Way Bengaluru is an affiliated chapter of United Way Worldwide. It has been actively operational in Bengaluru for the past 8 years. It has partnered with the Government for key projects such as lake rejuvenation called ‘Wake the Lake’ Campaign and working with government anganwadis to build a holistic development for children between the age of 0-6 years under the ‘Born Learning’ Campaign. Its primarily focus areas are education, livelihood, health and environment.

Note: This is a press note sent by United Way of Bengaluru, and published here with minimal edits.

Heat, dust and floods: What’s up with Bengaluru?

Bengaluru is losing its greenery right in front of our eyes – how are we getting affected? What does the data show? First part of a new series.