This is a sign that citizens are beginning to use IT Act section 66A to hit back people posting hurtful and offensive remarks online, in response to their own articulations. V R Bhat, a Kannada columnist in Bengaluru, and active user of Facebook found himself on the receiving end of 66A this week, when someone he offended used the infamous IT Act’s 66A clause on him.

The “mistake” done by Prabha Belavangala (better known as Prabha) that attracted the above statement was to question the religious activities of various politicians including Narendra Modi and Siddaramaiah, in the broader perspective of “brahminical forces controlling the society through right to worship.” 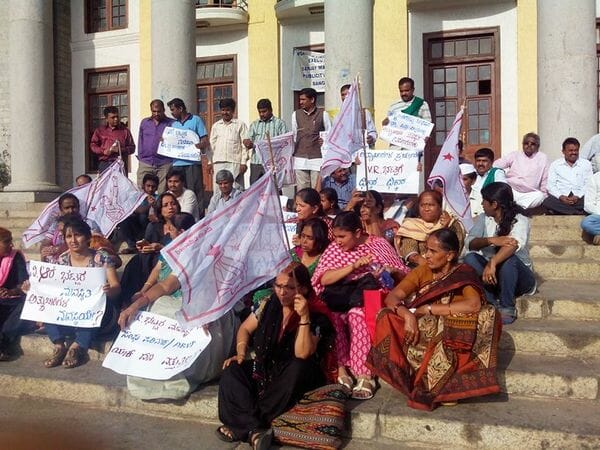 As soon as this post by Prabha was circulated widely on Facebook, the walls were flooded with comments, out of which one comment was the above, by the accused. The words used in the comment and thoughts behind them drew flak from everyone. Finally Belavangala decided to file a complaint, though Bhat apologised for his post and deleted his comment. By then many had saved the screenshot of the comment.

The complaint was filed in Chandra Layout police station on Monday afternoon. Complainant Prabha was accompanied by many other journalists and theatre artistes. Soon television took up the issue and the topic hogged limelight during prime-time television in many Kannada TV channels. A request was given to Tahsildar of Nelamangala, asking them to extradite Bhat.

The complaint copy says that charges have been slapped under IPC 109 (abetment to crime), 506 (criminal intimidation) and 504(Intentional insult with intent to provoke breach of the peace.) If convicted under these, the accused might face jail upto two years and/ or fine.

Wikipedia defines a troll as a person who sows discord on the Internet by starting arguments or upsetting people, by posting inflammatory, extraneous, or off-topic messages in an online community (such as a newsgroup, forum, chat room, or blog) with the deliberate intent of provoking readers into an emotional response or of otherwise disrupting normal on-topic discussion. The act of posting such comments is trolling.

‘Our fight is not against person, but against the mindset’

Dineshkumar, a filmmaker and journalist who accompanied Prabha, said there is an organised group behind such attacks on certain persons in social media. “They indulge in character assassination of certain persons. This has to be stopped,” he said, adding that the group will approach the city Police Commissioner today to urge him to take action against the accused under Prevention of Sexual Harassment act. He clarified that the fight was against the mindset, not against any persons, though the mindset is exhibited through persons.

“There is a team behind the whole episode. This is a mindset. Some vested interests are using vocal and harsh people like Bhat and putting forth their agenda. This has been going on since the election time. The team of people led by such trolls was not letting anyone comment on any right wing policies or persons,” said Prabha, in a TV interview on Tuesday. The group also held a protest on Tuesday evening in front of the Town Hall.

V R Bhat is a columnist with Hosa Digantha, a Kannada daily, and is active on Facebook. One of his facebook posts talks about the launch of an RSS branch in his hometown in coastal Karnataka.

However, RSS has distanced itself from V R Bhat. Through a press release, RSS Karnataka clarified that it has no links with V R Bhat. “The said person has no responsibility of RSS. His remarks have nothing to do with RSS; RSS will never endorse such irresponsible and socially unacceptable comment,” said the press release issued by Prof B V Sreedharswamy, RSS Joint General Secretary, completely distancing itself from the accused and the controversy itself. RSS also requested the media not to drag its name into the controversy.

Citizen Matters had published a guide on communicating through social media under the 66A scenario, and about the possible use of 66A of IT act to get protection from online harassment. The same act has been used in this case, which is a proof that the awareness about using the act against trolling is increasing.

Know this law well: It can get you arrested for a Facebook post or text message!
How not to get arrested under 66A for your online chatter

For nearly two months now the workers from northeast states have been threatened, assaulted and extorted. Finally, when they gathered the courage to go to the police, they got very little help.