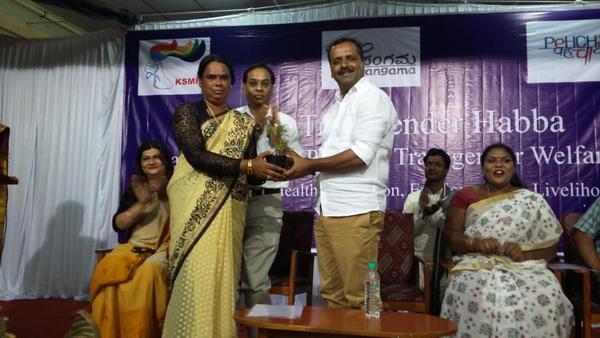 Deepika, a transgender and PUCL vice-president, presents a flower pot to Health Minister UT Khader as Ravindra, PD, KSAPS (centre white shirt) looks on. On the left is Simran Sheikh, national programme manager, India HIV AIDS Alliance and Manjula, Board President, Sangama is on the extreme right. Pic: B David

“Karnataka will soon conduct a transgender survey and the Health Department will take the lead as it will ensure gender minorities’ access social entitlements and will support them to exercise their constitutional rights,” said Health Minister UT Khader.

He was addressing over 200 transgenders, who gathered at the 3rd Transgender Habba, a `Big Push for Transgender Welfare initiatives in Karnataka’ organised by Sangama, an NGO working for the rights of sexual minorities in Bengaluru from 1999. The Health Minister also said that the Karnataka Transgender policy is in its final phase and it would be released after legal review. “I am also pushing for establishing the Transgender Board in the cabinet,’’ he said as Ravindra, Project Director, Karnataka State AIDS Prevention Society cheered the statement.

Elavarthi Manohar, founder of Sangama, said: “Despite all our collectivisation and struggles, nothing much has changed in the lives of gender minorities.’’ He requested the government to bring all the services under the Transgender Board instead of one department like Women and Child Welfare, where the schemes for minorities like TGs get buried. He exhorted the community to enter active politics and use the platform to empower the community.

“Cutting across all political parties, Sangama is involved in national advocacy for the last few months to promote the rights of transgender persons, to stop centuries of injustice, discrimination and persecution faced by gender minorities of LGBTQI in India,’’ said Rajesh Umadevi, Director, Sangama.

Sangama reaches out with HIV prevention services to 84,000 members of MTH (MSMs, transgender and hijra) communities under the Pehchan programme of India HIV-AIDS Alliance.

BT Venkatesh, ex-Public Prosecutor, said: “I have been supporting Sangama for the last 17 years and have been a witness to how it fought for the rights of the sexual minorities. Many changes have taken place because of the commitment of Sangama. We are still fighting against the draconian section 377 and want decriminalisation of consensual same-sex relationships.’’

Sonu Niranjan of Sangama, a female to male transgender, said: “Transmen or female-to-male transpersons are further marginalised within the gender minorities. We should be included at the stage of designing and formulating the schemes for these communities. Due to non-acceptance at homes, there are incidents of many transmen running away from Kerala to neighbouring states. This craving for social acceptance is not merely a personal wish, it represents the entire community.”

“We are actively lobbying to support passing of the Transgender bill in the parliament. Now we demand national and state-level transgender welfare boards to ensure social inclusion to all identities of sexual minorities under the umbrella word transgender,’’ said Nisha Gulur, a transgender and Advocacy Officer who compered the day-long events.

Shivani, a transgender, who joined a law course in the city, spoke about Article 14 and urged the community to fight for their rights and to use the one percent reservation in educational institutions. Sanjeev, a transgender who is living with HIV, narrated how he contested the local panchayat polls in Udupi district, and how it changed acceptance in the community. Manjula, a transgender leader and president of Sangama and Bharathi, a jogappa from Hubli also participated.

About B David 1 Article
The author has not yet added any personal or biographical info to her or his author profile.

How is the global economic crisis shaping the job market in Bengaluru? Citizen Matters inquired into whether companies in the city are only firing or also hiring.

The Rise High Award recognises and honours exemplary apartment community initiatives in Bengaluru. The event will be held on September 8, 2018.

PUCL asks BBMP to not lease out new super-specialty hospital

The land and facilities of the hospital belong to public, and this handover amounts to a theft from our collective rights, says PUCL.