You ask any resident of Bengaluru city about the traffic ordeals he/she goes through on a daily basis. You will hear one common answer—it is getting worse every day. Though it is more than seven years for Namma Metro in construction, the city will have to wait for one more year or so, to see its first phase fully implemented. Once completed, it will give some respite to those who live or work in its catchment areas. But, those who do not live or work around the Namma Metro route, keep asking what is in for them.

Trains are the most sustainable mode of transport 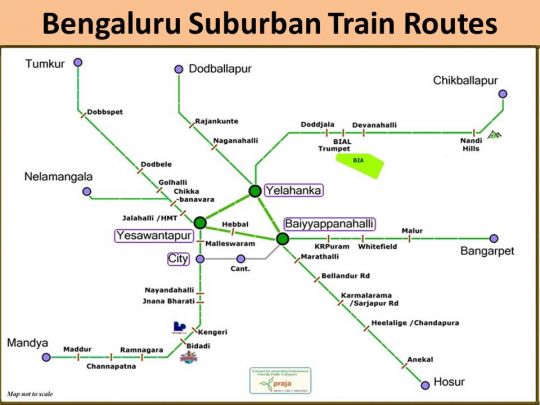 Much before the Bengaluru city started to encounter the unprecedented growth and traffic issues, city residents from the city and its suburbs including the surrounding towns of Ramanagarm, Tumkur, Bangarpet and Doddaballapur have been using the regular long distance trains for their daily commute. One main reasons being travel by trains is economical, when compared to KSRTC buses. The railway’s monthly and quarterly season passes work out cheaper. KSRTC didn’t offer monthly pass system then.

In 80s, KSRTCS fare from Bengaluru to Ramanagram used to be Rs 6 whereas railway monthly season pass worked out to be Rs 45. Moreover the predictability of arrival/departure timings is the big plus which people like about trains. These two factors weighed very much on people to use trains for their daily commute.

Even today, single fare in train to Ramangaram is Rs 20, the monthly pass works out be Rs 300. Can there be a more economical option than this? Though it may not be the ideal fare given the high cost of operations, this is what the railway offers today. It can go higher to sustain the operational cost. But it will still work out to be cheaper than using personal vehicles or buses. More importantly, it is sustainable and environmental-friendly choice.

Now in 2015, the choice to use trains for the daily commute has much more rationale than before. Incidentally a lot of younger generation is now opting for the trains for their daily commute. According to 2012 RITES report, there are about 1.5 to 2 lakh commuters who use trains on daily basis in and around Bengaluru City. It will only increase, not decrease, even though there hasn’t been much effort from South Western Railway which serves Bengaluru City, suburbs and the surrounding towns to address this segment.

Since 2010, owing to public pressure and pressure from railway ministers from the state, SWR has added a couple of dedicated suburban trains to Hosur, Devanahalli, Nelamangala and the recent DEMU service to Ramanagaram. Though not all of them are at convenient times, still people continue to patronise the services. The services towards the city during morning hours, and from the city during evenings run full. This only points to the urgent need for a full-fledged ‘suburban train’ services. Are the governments, both at the state and centre, listening?

A number of citizens groups have been active on this issue. Prominent among them are Praja-RAAG, Whitefield Rising, Citzens4Better Bengaluru and associations like WACIA, WEPPIA etc. With their constant efforts and liaison with area MPs, in next 6-9 months there would be a new halt station at Hoody/ITPL area in Whitefield. The station is being funded by MPLADS funds of the Bangalore Central MP P C Mohan. Their demand for extending Ramangaram-SBC service to Whitefield is still to be fulfilled, but the demand is being considered.

Now a new initiative has been started to publicise the various trains that runs between Bengaluru and various towns around it. Facebook is being used as media to disseminate information on trains and their timings in respective directions. It is being promoted by Namma Railu advocacy group from Praja-RAAG. The promoters of this campaign are hoping that people will benefit from this information and hopefully would start using it based on their convenience.

The information can also be accessed at https://www.facebook.com/BengaluruSuburbanTrains

About Khader B Syed 9 Articles
Born in Bangalore, engineer by education and profession, Currently based in USA. Co-Founder, Praja - RAAG (Research, Analysis and Advocacy Group).
Website

How we registered our Apartment Owners Association under KAOA, 1972

Here’s how owners of a new apartment complex can ensure their association is formally registered under Karnataka Apartment Ownership Act (KAOA), 1972.

This week’s scan of Kannada newspapers have a number of reports from load shedding and its aftermath to Bangaloreans getting a chance to elect their mayor directly and so on.