In an early morning tragedy, Ernakulam-bound Bengaluru-Ernakulam Intercity Express (Train No. 12677) derailed in Belagondapalli near Anekal in city’s outskirts on Friday, leading to the death of 12 passengers. 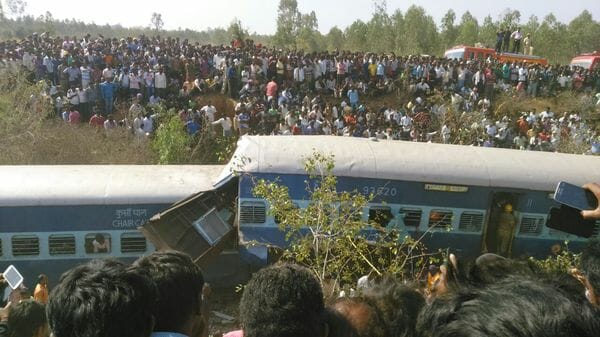 Two compartments of the train collided, causing the loss of lives.

Over 100 passengers are said to have been injured in the accident of which many are in critical stage. However, according to official version, the number of deaths is 10 while 18 were injured. The dead include five male passengers, three female passengers and a 12-year-old boy. Injured passengers include two citizens of Poland. Five people among the injured are said to be in a critical condition. 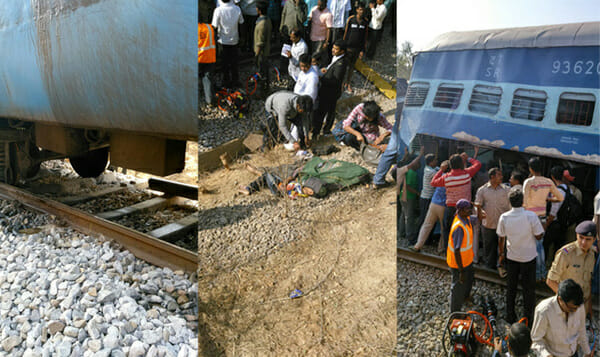 A picture shows the displaced railway track. A child and an adult injured in the Bengalur-Ernakulam train accident. People in a damaged compartment being rescued.

Nine coaches were derailed and collided one another, as the train chugged over the track, leading to the accident at 7.45 am. Speaking to Citizen Matters, Lakshminarayana Acharya, a resident of Anekal, said that railway track repair work was going on the same railway route during last few days. The engine and the first two coaches of the Ernakulam-bound train passed without harm, but the next seven coaches behind them tilted and fell. It led to slipping of a piece of track resulting in the collusion of ninth and tenth coaches, causing major damage to the passengers. The derailed coaches are said to be D-8, D-9, D-10, D-11, two AC Chair Cars and two unreserved coaches. 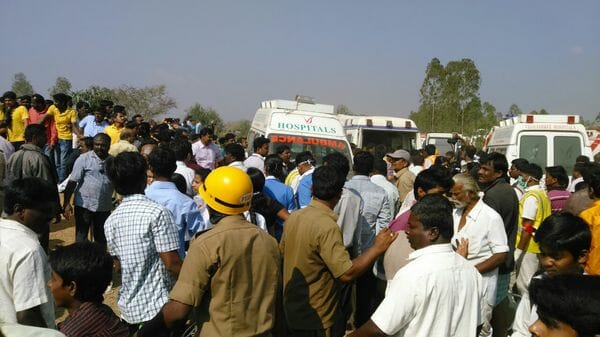 Injured in the train accident being shifted to hospital.

Official versions say a boulder that fell on the track caused the derailment. The train had departed Bangalore Central Railway Station at 6.15 am. The accident site is near Hosur, 15 km away from Tamil Nadu border. Ambulances and equipment were brought from Bengaluru as well as Tamil Nadu to help the injured and to lift the shattered coaches.

The Hindu reports that Nagercoil Express coming towards Bangalore City, which was near the accident spot, will now operate as a special train to Ernakulam and will take passengers from the Bangalore-Ernakulam Inter city Express. Coimbatore-Kurla (Train no. 11014) which left Coimbatore on Friday morning is being diverted from Salem. It will go via Tirupattur and Bangarpet.

Rescue teams were put to work to help the injured passengers who were cramped in the mangled compartments. The injured were admitted to the Anekal General Hospital, Narayana Hrudayalaya and other nearby city hospitals for treatment. 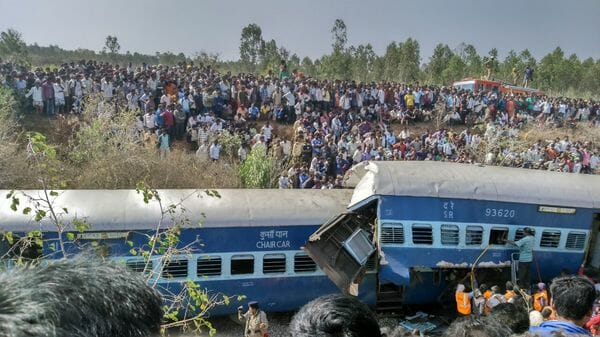 Aman Suresh (13), a boy from Thrissur

Names of some of the injured in Hosur train accident

Karmel (35) a resident of Poland

A survivor, Rohini Hariharan, was quoted by The Hindu as having seen people hanging from the train.

Union Railway Minister Suresh Prabhu has tweeted that he has “ordered an enquiry to fix responsibility and for corrective action to prevent such unfortunate accidents. Monitoring action regularly.” He has announced an ex gratia compensation of Rs 2 lakhs for the families of the dead, Rs 50,000 for grievously injured passengers and Rs 20,000 for people with minor injuries. The Minister is expected to visit the accident spot today. Bangalore North MP DV Sadananda Gowda visited the spot.

Pictures in this story have been sourced from the Whatsapp group of people travelling from Anekal to Bengaluru city.

Alleged rape in school: Bengaluru parents erupt in anger
Road accident: What should you do?
Bangalorean recounts the horror she faced in Uttarakhand
640 people from Karnataka stranded in J&K floods, around 200 rescued

A CSTEP study has found that many transformers in Bengaluru are poorly maintained and are not metered. Damaged transformers tend to disrupt power supply and pose a huge financial burden to BESCOM.

The waste has been traced to Apollo Hospitals. Both Apollo and its waste contractor denied the dumping.

A treat for photography enthusiasts

JP Nagar and BTM parks will host 40+ framed cityscapes over the weekend. Why go to a gallery to see the best of photography? ‘Art 4 Public’ is coming to your doorstep! A two day photography exhibition, at your neighborhood park! Enjoy the evening with your family and friends.