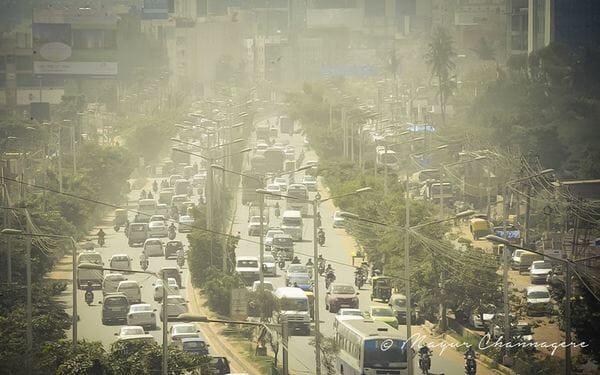 Air pollution in Bengaluru has become so severe, that it is forcing people with lung problems to even leave Bengaluru. Dr Padma Sundaram, pulmonologist at Manipal Hospital, says that some patients leave the city for months, to get better. She says that cases of asthma and respiratory infections are increasing, and that people with lung problems sometimes need ICU admissions when pollution levels peak, such as during winter smog and Diwali. “People from highly polluted areas are coming for treatment more often,” she says.

A lung test on 503 Bengaluru school children last year by the campaign CLAIM (Clean Air India Movement), found that only 11% of them had lungs in ‘excellent’ condition; 36% students failed the test. Studies by paediatric pulmonologist Dr H Paramesh have shown that pollution has a significant impact on lung health, especially among children and some occupational groups like traffic policemen.

His research also found that children faced a higher risk of asthma if they studied in schools located in areas that faced heavy traffic. The risk shot up further when the traffic factor was compounded by the low socioeconomic status of the children. Children from poorer households are affected more because they live in overcrowded, ill-ventilated houses, and also because they suffer from indoor pollution caused by the burning of firewood for cooking.

His studies also showed that asthma rates were highest among children living in urban areas, followed by those in semi-rural and rural areas (16.6%, 7.5% and 5.7% respectively). “Within Bangalore, children from core areas suffer more. Sulphur dioxide and ozone are major irritants for the respiratory system. Ozone is formed more around traffic signals, when bright sunlight interacts with vehicular pollutants. This may be contributing to the rise in asthma cases among children during summer,” says Dr Paramesh.

It’s not just your lung that is affected!

While air pollution is known to cause lung problems, there is much less awareness about its conclusive links with premature deaths, heart diseases, stroke etc. Scientific evidence has been highest against PM2.5 – fine particles with diameter less than 2.5 micrometer, made up of many toxic metals and acids.

Data from AQI (Air Quality Index) monitoring stations in the city shows that PM2.5 is above limits on most days. In fact, AQI usually exceeds standards because of high levels of PM2.5 and PM10 (relatively bigger particles with diameter less than 10 micrometer). AQI stations in the city show no data on many days, but on days that data is available, PM2.5 often quite easily crosses levels of 100 µg/m3.

The average levels of PM2.5 in a day should be below 30 µg/m3 for it to be in “good” category as per AQI. But data from the Karnataka State Pollution Control Board (KSPCB) for 2015-16 shows that annual averages of PM2.5 were in the range of 50-70 µg/m3in most parts of the city. And even though, technically, limits are set for PM2.5, according to the WHO there is no level at which PM2.5 does not cause any harm.

According to WHO,  PM2.5 is the fifth biggest risk factor for death in India. WHO’s Global Burden of Disease (GBD) study revealed that 6.27 lakh people died in India due to ambient (outdoor) PM2.5, in 2010 (6% of the total deaths). The deaths were mostly from heart diseases, especially Ischemic Heart Disease (IHD) wherein plaque deposits in blood vessels reduce blood flow to the heart. A quarter of the deaths were from respiratory diseases. PM2.5 also majorly contributed to Acute Lower Respiratory Infections (ALRI) among children under five years, which can be fatal.

Dr Narendra Rangappa, Orthopaedic and Senior Consultant at Fortis Hospital who also practices community medicine, says that the number of youngsters prone to heart attack has increased over the years. “A lot of young people in the early decades of their life undergo bypass surgery, and certainly air pollution is one of the major reasons for it.  Nitrogen oxide (from vehicles) and sulfur dioxide (from industries and fuel combustion) in the air causes cardiovascular diseases. Gas boilers at home emit carbon monoxide. Burning of garbage and waste too emits harmful substances,” he says.

Though both PM10 and PM2.5 are both dangerous, PM2.5 is more harmful because of its small size which allows it to penetrate deeper into the lungs and enter the bloodstream. PM2.5 is linked more with heart diseases, and PM10 more with respiratory diseases like bronchitis, asthma, lung cancer etc.

Studies in the US and Europe in the 90s showed that PM by itself could cause cardiovascular diseases, without any additional factors, either suddenly (like a heart attack) or over time.

A major long-term study – the Harvard Six Cities Study that tracked 8000 adults in six US cities over 14-16 years, It found that the most polluted city’s death rate was 26% higher than that of the least polluted city. The highest number of deaths were from cardiovascular diseases, and then from lung cancer and cardiopulmonary diseases. This study led to the regulation of PM2.5 in US. Another study by the American Cancer Society among 50 lakh adults found that hike in PM2.5 levels was linked with deaths from lung cancer, cardiopulmonary diseases and deaths from all causes.

The main source of PM2.5 in Bangalore is vehicle pollution, while that of PM10 is road dust. Like PM2.5, PM10 also exceeds standards very often under AQI monitoring. Air quality monitoring in 2015-16 shows that PM10 (RSPM) levels were 2-3 times the standard in most locations.

An IIM study in the city in 2008-09 showed that, with every increase of 10 µg/m3 in daily average levels of PM10, the daily death rate increased by 0.22%. The city’s high population and high levels of PM10 would mean that this will translate to a high number of premature deaths. Other Indian metros show similar patterns.

Notably, current Indian standards for pollutants have much higher thresholds than that of developed countries. For example, the Indian standard for annual average PM2.5 is 40 µg/m3, compared to the WHO guideline of 10 µg/m3, and US national standard of 15 µg/m3. India faces many challenges in reducing pollution, and hence cannot lower its standards immediately.

In 2013,  the IARC (International Agency for Research on Cancer) – WHO’s cancer agency – confirmed the close link of PM with higher rates of lung and urinary tract/bladder cancers.

A Hyderabad study in 2002-06 found that vehicular emissions caused mutations in the cellular chromosomes of traffic policemen, which could lead to cancer. The study had compared traffic policemen with office workers, and found that the policemen had twice the level of chromosomal mutations as office workers. Commenting on this study, ICMR (Indian Council of Medical Research) said that recent trends in childhood cancer could mean that children were more at risk from pollution.

A trend report by NCPR (National Cancer Registry Programme) shows that in 2008-09 lung cancer became the most common type of cancer among Bengaluru men, which was only the third most common type in 1982-83. The report shows a steep upward trend in lung cancer cases among both Bengaluru men and women since the late 90s. Cases of other types of cancer have also increased.

Dr Niti Raizada, Medical Oncologist and Hem-Oncologist Senior Consultant at Fortis and Vikram Group of Hospitals, says air pollution can cause a range of cancers, not just lung cancer. “Pollutants from petro-chemical industry can cause liver cancer, it can also lead to brain tumours and blood cancer. Benzene emitted from crude oil and burning of certain plastics can result in Leukaemia. Kidney, skin and bladder cancer can be a result of arsenic content in the air. Pollution emitted from mining may lead to lung and pleural cancer,” she observes.

Other than PM, Carbon Monoxide (CO) and ozone are observed in high levels in Bengaluru, according to the NGO Greenpeace’s analysis of the city’s AQI readings of April-November 2015. A 2007 study by TERI in Bengaluru, commissioned by the Central Pollution Control Board (CPCB), had also found high CO and ozone levels.

India’s air quality is so bad that even aggressive measures will not help it immediately, according to Aaron Cohen who was part of the GBD study, and others. They say that even bringing down PM2.5 levels by 20-30% over the next 15 years would only keep the current death rates constant, and will not reduce it. But they say that initial regulations can be introduced at a relatively low cost, which will help in the long term.

Dr Bobby Joseph, HOD at the Department of Community Medicine at St John’s Medical College, says that high pollution levels have not led to changed behavioural responses among Bengalureans. “This could be because the impacts of pollution are not directly visible,” he says. Even individual decisions like not buying diesel cars or just switching off vehicles at traffic junctions could go a long way in reducing pollution.

How does law help in making workplace safer for women?

How to constitute anti-sexual harassment committee at your workplace? Here is what you need to know.

Making disaster resilient infrastructure and planning a part of the city’s development plans can mitigate the impact of disasters in urban areas.