This is an excerpt introducing the book Nature in the City: Bengaluru in the past, present and future, written by Harini Nagendra, a Professor of Sustainability at Azim Premji University, Bengaluru, India. The book is scheduled to be released on June 10th, 2016, at 6.30 pm at Alliance Francaise, Bengaluru. 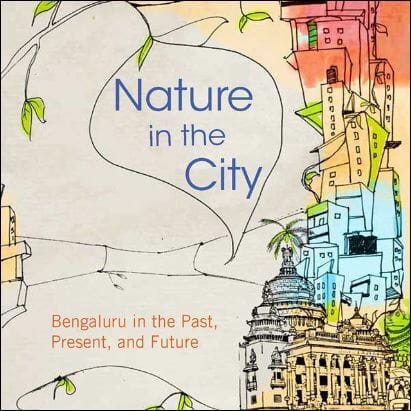 My office is in the peri-urban fringe of Bengaluru. From a place that was fairly rural, in ecology, lifestyle and livelihoods, this area has transformed almost literally in front of my eyes in the past decade into a mess of congested traffic, garbage dumps, slums cheek by jowl with apartment blocks, and glass fronted offices and glitzy malls surrounding villages with cattle.

I also live in the peri-urban fringe of Bengaluru, not far from my office. Adjacent to my home is a beautiful lake, restored and maintained by the continuing effort of local citizen groups. Walking around the lake, you get an attractive view of a thriving patch of nature in the city, vibrant and active.

Over fifty species of birds can be found in the lake, collecting nectar from the flowers, swooping down on insects, frogs and snakes, nesting and breeding in the water, reeds and trees. Spectacular birds such as the pelican (Pelecanus philippensis) and the painted stork (Mycteria leucocephala) annually attract a large number of human visitors. A number of committed wildlife photographers have become regular visitors, providing free workshops on nature photography, and posting photographs on social networks that are widely seen, communicating valuable messages about urban biodiversity to a motley bunch of informed naturalists and complete amateurs.

The lake acts as a social node, connecting people living around its expanse. These visitors have now formed groups engaged in diverse efforts to make the city a more sustainable place, launching movements for solid waste segregation, cycling and jogging groups, and initiatives to promote organic food.

You could almost forget that you were in a big city, or that its rapid growth is posing a challenge to the lake. Or develop a rosy-hued perspective of the possibilities for the persistence of nature in a context of rapid change. Yet, as you walk around the lake, you can also see the daunting challenges faced by the community of actors that manage and protect the lake, on an almost daily basis.

Sewage from residences and commercial buildings around the lake pose a constant problem, creating a nutrient rich atmosphere that encourages the spread of invasive water weeds. These weeds reduce the oxygen levels in the water, resulting in the death of fishes and turtles from asphyxiation, and making it difficult for birds to feed adequately. Debris and plastic is dumped around the lake, often within the lake. A number of large buildings are coming up on the wetlands upstream of the lake, which will pose major challenges for recharging the lake and for cleaning up the contaminated water in the years to come.

Bangalore is India’s fourth-largest city. With a population of over 10 million cramped into an area covering 709.5 km2, the Greater Bangalore Metropolitan area experienced a massive growth spurt of 49% between 2001-2011 (Patil et al., 2015). The conflicts between development and conservation described above are a consequence of this rapid growth.

This is not a story unique to Bengaluru, though. With a few minor changes in detail, similar narratives can be told of most Indian or Asian cities, indeed also of growing cities in many parts of the world.

Indeed, humanity is widely believed to have entered a new era, the era of the Anthropocene. The scale of human impacts on the Earth has become so dominant and all-encompassing, that the future of all living species is at stake. It is not that humans did not remake the earth earlier: but not so fast, or in such far reaching ways. How will the increasing tendency of people to move to congested and polluted cities impact our wellbeing and our future? Is there, in fact, a place for nature in the city? Is this something we need to care about?

The seeds of this book began in questions such as these. With a background in ecology, I had focused on issues of forest change beginning in the early 1990s, looking at forests in a wide swathe across South Asia including the Western Ghats, central India, north Bengal, and the foothills and mountains of Nepal.

Over time, with close to 15 years of research experience in these distant locations, I began to realize that the one place I had not studied was in fact the closest to me: my home city of Bengaluru.

This was by no means an understanding unique to me. Cities have not been a place well studied by ecologists, who prefer to investigate places less visibly impacted by humans. Yet, it is cities such as Bengaluru that have experienced exceedingly rapid and widespread changes in short periods of time, transforming them almost beyond recognition.

In the last two decades, a number of ecologists from around the world have begun to examine issues of the ecology of the city in growing numbers, with urban ecology now becoming a well-recognized field of its own. Despite this, research on urban ecology in South Asia, and in particular India, remains sadly limited. This is doubly unfortunate given how many people live in cities and towns, even as urban settlements grow in number and in size.

In 2006, I began a long term program aimed at documenting the ecology and biodiversity of the city. I was fortunate to be soon joined by a large number of extremely committed students and colleagues, who brought in their own enriching observations, experiences and perspectives on the city. Our goal, from the start, was not to conceptualize this project as pure research with a solely academic purpose of advancing understanding. Instead, we sought to work in a more integrative and organic manner, linking research, practice and training.

Over the years, we have been able to expand on these early efforts to conduct a wide ranging program of research on the city. Our research has primarily focused on understanding the ecology of different spaces within the city: its streets, parks, lakes, home gardens, slums and sacred spaces.

With close to a decade of research, we now have an in-depth, extensive body of material on biodiversity in the city. Described in over 25 scientific publications on various aspects of nature in Bengaluru, material of this nature is of rare value, unavailable for any other Indian city in this level of detail. Much of this has also been described in popular articles in local newspapers.

Focused on ecological research, we realized early on that the patterns of biodiversity we see today are shaped by the people who planted these in recent times. These preferences have in turn been considerably influenced by the ideas and aesthetics of the past. Thus we began to expand the focus of our studies, interviewing residents of the city to understand their influence on nature, as well as how their attitudes and perceptions have, in turn, been shaped by nature. We also sought out old maps and archival material, and conducted interviews with older residents of the city, to see how the framing of urban nature, and the nature of interactions between people and the environment have changed in the landscape around Bengaluru over the previous decades and centuries.

The goal of this book is to draw on this material to investigate the broader themes that stimulated the original act of enquiry. First, is there hope for nature in rapidly urbanising Indian cities such as Bengaluru? It is often assumed that there is none, but my work suggests that a better, different tomorrow is within reach. Bits of it may even be taking shape today.

This book sets out to provide a positive response to this question, examining diverse ways in which citizens, communities, social movements and the State have planted, nurtured and restored nature in the face of tremendous challenges. Investigating this question further, the book examines two broad themes. How has the importance of nature in the city changed over time, in people’s practices and in their imaginations? And, how does this altered framing of urban nature influence the prospects for human wellbeing and sustainability in our increasingly urban future?

The core of this book draws on a decade of field-based research conducted in different parts of Bengaluru, in collaboration with a number of students and colleagues. These investigations assess the patterns of biodiversity distribution in Bengaluru today, using satellite image studies, Geographical Information Systems analyses, landscape ecological methods, field studies and environmental monitoring.

We cannot understand what shapes these patterns of biodiversity, or place them in the context of the past and future of the city, however, unless we investigate history in greater detail. The people who shaped the city of the past have left their legacy in the footprints of the present. Drawing on extensive studies of archival documents, administrative records, journals and maps, this book provides a historical framework within which to situate a better understanding of the present.

Finally, a city is nothing without its people. A book about nature in the city would be incomplete without adequate reflection and understanding of the two-way interactions between people and nature in the city. The book draws on an extensive set of discussions with people from the city, who have generously shared their diverse perspectives: including street vendors and children, home gardeners and corporate managers, residents of slums and high end apartment, and community groups, civic organizations and government representatives. Different people view nature differently: they even part ways on what it means, or how to relate with it.

The question is: are there spaces for joint action? Combined with our studies of present biodiversity, and archival examinations of the past, these interactions with diverse groups of people give us a sense of the future towards which we are headed.

Fear of rejection because of inter-caste and inter-religion marriage is the main disease Shivani Pal wants to eradicate with the project.

Amrita Pritam: she did it her way

“Amrita, A Sublime Love Story” brings into focus the perpetual mystic love of Amrita Pritam for Sahir Ludhianvi, as well as her feelings for her husband Pritam, and her partner, Imroze.