It is a known fact that water tankers extract any water that they see in Bengaluru. This video is a proof of it. Come summer, water tanker business is at its peak, especially on the outskirts of the city where there is no Cauvery water supply. The business is a pleasure in the years in which there is less-than-usual rain, because demand for water is the highest.

Nagaraj (name changed) is an owner of a water tanker, operating in Kammanahalli. He has been in the tanker business for 15 years now. There were virtually no rules for extraction of groundwater when he entered the business. “There were no requirements as such that had to be met to start a water-tanker service before,” he says.

Is there a rule at all for private tankers? Are you aware whether the water tanker that supplies water to your apartment or house meets the standards? What are the standards, if any? And who is monitoring it?

Who will bell the cat?

When it comes to the business of private water tankers in Bengaluru city, the situation is that of ‘who-will-bell-the-cat’. While Bangalore Water Supply and Sewerage Board (BWSSB) says it has absolutely no power to control private water tankers, the Bruhat Bangalore Mahanagara Palike (BBMP) officials are not even aware of the system of trade license to be issued to water tankers. Therefore, all the water tankers in the city are operating without obtaining trade licenses, and following no norms. There is no one to check the quality of water supplied, and the source.

When contacted, BBMP Chief Health Officer Dr Vatsala said she did not know about issuing trade licenses to water tankers and suggested this reporter to speak to a zonal health officer.

BBMP Health Officer for Bengaluru South and Raja Rajeshwari Nagar zones, Dr Manoranjan Hegde too said that there was no system of issuing trade licences to private water tankers. “BBMP has not yet fixed the trade license fee for water tanker business. In the absence of regulation, we cannot even call them illegal,” he said.

However, when Citizen Matters cross-checked the BBMP’s schedule of trade category and license fee, part IV included “Water Tanker” too. The trade license fee prescribed for water tanker is Rs 1,000. The ward-wise list of approved trade licenses for six months displayed in BBMP too does not include the license issued to water tankers.

In April 2013, BWSSB had written to BBMP, urging the Palike to ensure that private water tankers compulsorily obtain trade license and display the source of water on the license.

A senior officer from BWSSB who did not wish to be named, told Citizen Matters that it is the responsibility of BBMP to bring in a system to regulate private water tankers. “BWSSB cannot control water tankers until and unless the State government gives us the power to do so. But, BBMP can do it by introducing the concept of trade license to these tankers. We have no idea how many tankers are operating in the city, but they are all operating without paying any fee to the Palike,” the officer said.

He also said that it was necessary for BBMP to regularly do quality check of these tankers. People are not aware of whether they are consuming potable water or not.

What procedure should be laid for regulating water tankers

When Citizen Matters tried to find out the rules and regulations sometime ago, then-BWSSB chief engineer Venkataraju had given us some theoretical pointers on what has to be done to operate water tankers legally.

BBMP even prepared a note detailing the rules for private players providing water tanker services, as stated below:

These were the same pointers that BWSSB Chief Engineer had mentioned in his letter written to BBMP in 2013.

How far is the procedure followed?

The first point mentions that a “lorry / tractor” shall have valid RTO Registration Permit.

“Many who have bought tractors for agricultural purpose are using it to transport water to the tankers. This has to be looked into by the BBMP,” says Venkataraju. He adds that not a single tractor has been registered for this purpose.

RTO officials too confirmed that there was no data available on the number of tractors with RTO permit to be used as water tankers.

All water tanker services must disclose their source of water, results of potability test, quantity of water drawn etc on paper. License can be granted only after these details are verified. The BBMP, though came up with rules and regulations, could never implement it, and the reasons are unknown.

No permissions for commercial borewells since 2013’

“Before drilling a new borewell it is now necessary to secure permission. BWSSB has not given permission to drill borewells for commercial use since 2013. But, we have given permission for a 1000 or so borewells to be dug for domestic use, mostly in apartments,” says Venkatraju.

However, not one so far has been penalised for operating borewells without permission. Action can be taken against those who use their domestic borewells to extract water for selling commercially, only when someone who finds it out lodges a complaint at a police station.

“But there is no way,” says Venkataraju, “to monitor all the borewells in the city to keep a check on whether or not a given borewell registered for domestic purpose, is being misused for commercial purpose.”

Earlier, Citizen Matters had reported that the central groundwater authority had issued a directive banning permission to commercial extraction of water in Bengaluru, but state authority did not follow it. Now the BWSSB says there are no commercial permissions issued after 2013. So, if there is groundwater extraction for commercial purpose from any new borewell, it is bound to be illegal.

No tab on number of tankers in Bangalore

Nobody has data on the exact number of water tankers in Bengaluru. However, studies indicate that there are thousands of them operating.

Anirudh Venkatanarayan Rajashekar, a student of Master in City Planning in Massachusetts Institute of Technology, worked on a thesis on private water tankers in Bengaluru. The thesis says the RTO estimate of water tankers is likely to be accurate. To quote from the thesis,

Today there are various estimates for the number of tanker companies that operate in Bangalore. (Malini) Ranganathan puts the number of tanker companies at approximately 200, while others believe the number to be between 100-120 (“Excreta Matters: The Deccan,” 2012, p. 308; Ranganathan, 2014, p. 96). These companies own between 1,000 and 3,000 trucks. BWSSB officials believe that there are in excess of 2,500 tanker vehicles, the Central Ground Water Board (CGWB) estimates around 2,800, and the Karnataka Regional Transportation Organization (RTO) puts the number at approximately 1,000 (Central Ground Water Board, 2011, p. 20). Given that tankers, according to interviews, own between 2-4 trucks, it appears that the RTO estimation is likely to be most accurate.

Citizen Matters tried exploring the other requirements for water tankers to operate in Bengaluru. And here is what we came up with.

Though issuing trade license is not in practise, it is mandatory for water tanker companies that also own borewells, to obtain power license from BBMP for consuming electricity for commercial purpose. However, most of the tanker companies skip this step too.

Information collected by BBMP shows that power license has been issued to only 92 companies so far. Here goes the zonewise break up of the total number of power licenses given to water tankers.

And you have to believe this: Bommanahalli, Dasarahalli and West Zones do not have any water tanker companies operating officially. There are no valid power licenses in these zones.

Manjunatha Water Suppliers in Rajajinagar supplies water to Iskcon temple. Today the company sells around 3-4 loads of water each day to apartments and houses. This area lies in West zone, and is a proof that there are tankers operating in the zone, though there is no power license in the entire zone officially.

The following map by Anirudh Rajashekhar too shows existance of water tankers in almost all wards, irrespective of zones. 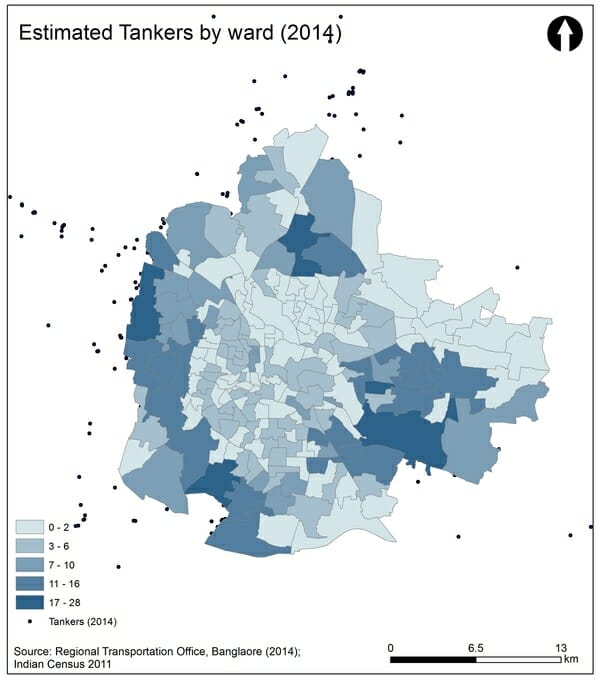 A map on the number of water tankers in Bengaluru wards, based on RTO data – 2014. Map by Anirudh Rajashekhar.

Nobody to enforce rules and procedures

Dr. Manoranjan Hegde informed Citizen Matters that BBMP can at the maximum get the BESCOM to stop power supply for the commercial borewells owned by unlicensed water tanker operators.

However, the threat of suspending power supply may not impact the tanker owners. Because, not all water tanker owners have borewells of their own. In most cases water is extracted from borewells owned by third parties at a cost, and sold at a higher rate to make profit on each load.

Asked if there is a provision for BBMP to seize the tankers with no power license, Dr. Hegde regretted that there was none.

Dasarahalli Zone Health Officer Dr Surendra said that they could take action against the water tanker owners based on public complaint. “But then, lot of practical issues are involved in seizing the tankers too. Where do we park the seized tankers?” he asked.

Reality of ‘drinking water’ tankers in Bengaluru – captured on video
Water tankers rule, no one to question
Water tankers: Making money when the sun shines and water flows!

“The acid was spreading through my body and had penetrated deep into my skin, but still the doctors didn’t offer me any first aid or treatment,” recalls Haseena, who was attacked in 1999.

Know the boundary of your new ward

With the delimitation of Bengaluru’s 198 wards, this new website will help you know the boundary of your ward and localities through interactive maps.