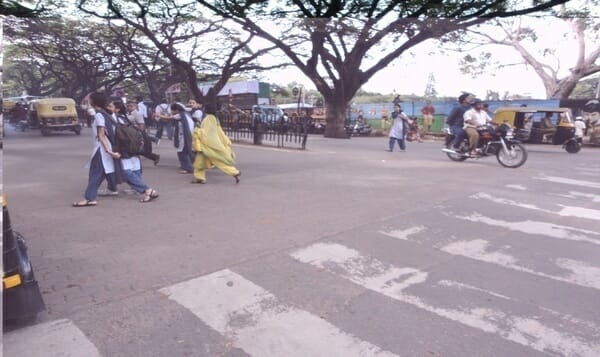 The place in front of K C General Hospital where a sky walk is proposed to come up. Pic: Taken from E-Proc website

Walking on some of the Bengaluru’s roads will be easier henceforth. Bruhat Bengaluru Mahanagara Palike (BBMP) has opened up tenders for 54 skywalks across the city. These are either important junctions where multiple roads meet, or mid-blocks with prominent properties on either sides requiring pedestrians to cross the road regularly.

While compiling the list of ten most accident-prone areas in Bangalore, Citizen Matters learnt from traffic police that the most predominant factor causing accidents is the pedestrians crossing the road in the midst of high speed traffic. With the absence of pedestrian skywalks and lack of security in subways, the pedestrians are left with no choice but to risk their lives. In this regard, we took a look at the list of upcoming skywalks across the city tendered by the BBMP.

The process of bidding for the contract began when the Request for Proposal (RFP) document was available for download at https://eproc.karnataka.gov.in since 30th April 2015. The last date for submission is 16th June 2015, until 4 pm. Technical proposals open the following the day after 4.30 pm.

The parties whose proposals are accepted will design, build, and operate the skywalk for a period of twenty years. They are allowed to generate revenue through advertising in this period. Following this period, the entire structure must be handed over to BBMP free of cost and free from all encumbrances, along with the advertising rights.

The bidder might either be a single entity or a consortium of maximum three members. The entity must be registered under Indian Partnership Act 1949, or, in case of a company, under the Indian Companies Act 1956.

The bidder / bidders should be in the business of constructing business/convention centres, institutions etc for at least the last five years. The company, either on its own or through an entity in which the bidder holds equity, must have designed and built skyways or escalators before.

The bidder must produce documentary evidence to prove a minimum net worth of 200 lakh rupees at the end of the latest financial year. Along with the bid, an Earnest Money Deposit (EMD) of Rs 2 lakh must be made through the e-procurement portal. In case the bidder does not secure the contract, the amount will be refunded.

How does a bidder get the project?

The RFP says that the proposals submitted will be evaluated on a number of parameters: experience of the bidder in constructing, maintaining and operating similar projects in the past, as well as experience in collecting revenue through advertisements; and the technologies that will be employed—solar power, advanced display boards, power efficient lighting system, dust-proof and waterproof technology, the aesthetic appeal of the structure, etc.

Other considerations include design of the skywalk, proposed manpower and the proposed plans for operation and management, which includes identification of the subcontractors, if any, number of security personnels deployed, timeline for repairs and attending to problems etc.

The contract award endows the successful bidder with advertising rights on the structure. The revenue generated from advertising on skywalk minus the annual concession fee agreed upon between the party and BBMP will be the profit made by the entity who has secured the contract.

However, the BBMP has made it clear that no advertisement or panel “or any obstruction shall be made in the bottom 1 [metre] of the walkway portion of the skywalk on both side. This 1m clearance is required for safety purpose so that there is a clear visibility available in this.. strip.”  This condition ensures that the advertisement billboards on the skywalk do not block the visibility of the walkway from the road.

Features of the skywalk

Each of these skywalks will have a load carrying capacity at least 500 kilos per square meter, complete with elevators and stairs on either side, with or without an escalator. They will also have a walkway of at least 10 feet wide, topped with non-slippery material, and a minimum distance of 3.5 meter between the floor and the roof.

Elevators—with a carrying capacity equivalent to 16 persons, and escalators (wherever provided)—with a minimum width of one meter and a speed of half a meter per second, covered with sheets for roofs and side portions—are required to be operational 24/7.

There is a provision to close one lift or escalator for maintenance for one day in a month. A mechanic to address any issues with either must be available on duty each day between 7 am and 10 pm, according to the tender document.

The roof can be covered with specific polycarbonate sheets, to make it leak-proof, and the floor laid with chequered FRP anti-skid tiles. BBMP has also recommended a tough plastic coat on railing pipes of the staircase to minimize its vulnerability to heat up or cool down due to temperature variations.

Not discounting aesthetic appeal, BBMP has also made it mandatory to line either side of the passage on the skywalk with flowering plants and shrubs. Additionally, provisions may also be made for coffee vending machines, phone booths and newspaper stands, inside the skywalk area.

CCTVs, with a storage capacity of one week’s footages, can be fixed inside the elevators and on the walkways of each skywalks, along with providing security personnels.

Can skywalks be made convenient and safe?
Kadugodi: How many more deaths before a pedestrian overbridge?

In the budget proposal, out of BBMP’s annual ward budget of Rs 6 crores, Rs 3 crores has been alloted to the economically backward neighbourhoods.

The left-leaning Bangalore People’s Forum has recently come up with a manifesto for consideration of candidates participating in BBMP elections 2010.

All you need to know about Ward 9 – Vidyaranyapura

What were the works done in Vidyaranyapura ward in the last five years? How much money was spent? What are the issues troubling the residents?