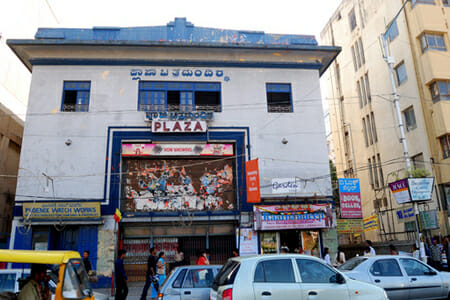 It was 10 pm on a summer in 1990’s. Kiran, a 10-year-old boy living in Srirampuram of Bengaluru, remembered his grandma all of a sudden, and started asking for her. When he didn’t see her in their home, he started creating ruckus by crying and repeatedly asking for her.

Finally one of his uncles took him to his grandmother – who was watching the second show in Geethanjali Theatre (now Big Bazaar in Malleshwaram) along with few other family members!

Such was the craze of watching movies in theatres, in those days. Some people visited theatres at least once a month, while some used to go every weekend. Gone is the glory – whistling, commenting, even jumping off the seats. Multiplexes are the in-thing.

Bangalore had more than 200 cinema theatres at one time. It has lost them one by one. Geethanjali, Sagar, States, Pallavi, Alankar, Geetha, Himalaya, Prabhat, Kino, Majestic, Kapali, Puttanna Kanagal theatre – the list is endless. The recent closure of Sagar Theatre on KG Road is just another example.

According to Karnataka Film Chamber of Commerce (KFCC), there are 40 multiplexes and 148 theatres in Bangalore. On an average, a multiplex has around six screens. Around five years ago there were 190 theatres in the city.

A multiplex screen can accommodate around 250-300 people maximum, while a single screen seating can have 700-1400 seats. Single screen theatres have ticket rates ranging from Rs 80-200, but multiplexes range from Rs 150- 500.

‘Difficulty in renovating is the problem’

D’Souza says that the major reason behind single screens closing down is the difficulty in renovating and adapting to latest technology in cinema projection which is very expensive. Many theatre owners are not capable of investing on it. Banks and other financial institutions do not give loans.

Sahil Patel, co-owner of Sagar theatre on K G Road, supports this argument. Technology needs to be upgraded and getting permissions for the same is difficult and expensive. Each projector costs around Rs. 2 crore. Each comfortable seat in a multiplex costs around Rs 5 lakh. Not many would want to invest so much money and take the risk.

Sagar theatre was a very popular theatre for screening Kannada films for the last 45 years. The theatre, with a 900 seating capacity, will soon be made into a multiplex.

D’Souza adds that land cost is another factor. With real estate booming, many single screen theatre owners are feeling the pressure and are closing down.

Uday Garudachar, owner of Garuda Mall, says that since the options in a mall are more, the crowd is more, as people want much more than a mere movie. Quality screening, sound and comfortable seating are the prime demands. Parking facility is another important factor, which draws people to malls, he explains.

Business is not the only reason

Patel points that location of theatres is yet another reason why they are closing down. He explains: In case of KG Road, earlier when people visited the Majestic area of Bangalore, it was not just to reach City railway station or bus stand, but for shopping and entertainment as well. So theatres were booming.

Now with all facilities and commercial establishments near residential areas, people visits KG Road mostly for transport. So the crowd for theatres is less. Most big theatres in Bangalore, including the multiplexes, are on joint ventures as no one wants to take risk.

‘Multiplexes too have problems’

B S Arun Kumar, owner of Sapna, Nartaki and Santosh theatres, says that today multiplexes too are running out of business like single screens. This is the reason why they give concessions and slash rates to even Rs 100 a ticket on weekdays. Entertainment is not a very lucrative business any more.

Arun Kumar points that the business isn’t good as the quality of films have reduced. The running time of a film has reduced from 5-10 weeks to 2-3 weeks – or sometimes just a few days. Only 30% of the movies break even. As a result multiplexes too are facing problem, but are doing well just because of other commercial units in malls.

Towards a profitable model

Satish Kumar, regional manager of Cinepolis, claims that multiplexes have not taken away the business of single screen theatres. “Many single screens- like Urvashi, Rex and Shankarnag have upgraded their screens. People add other commercial establishments to their area to get more returns. It is a win-win situation – employment increases, revenue in other forms increases and losses are shared. The economics of multiplexes work out better,”  he explains.

Sagar theatre also faces the same fate. Patel adds that though talks are on with business establishments in Mumbai for a joint venture, completion of Metro is crucial.

‘Movies are made for multiplexes!’

Satish says multiplex is like a multicuisine restaurant, catering to all tastes. He adds multiplexes have small theatres so the losses are not felt to a large extent. But in case of single screens with 1000+ seating capacity, if a movie does not do well, the loss is huge.

Ajay Chandani, a film distributor, says multiplexes are getting a bigger share in the entertainment business because they are drawing more crowd. Further, the type of films made are best-suited for multiplexes.

It’s all about the crowd

Ajay Chandani says some movies meant for single screens run well on them only. But such movies are not more in number. More dance-oriented and light-hearted entertainment oriented films are suitable for the local crowds. So theatres choose and play movies depending on their geographic location and the local crowd.

He also points that while there are many people who watch movies in single screens, especially the locals, the migratory population does not mind paying a little more for a movie in a multiplex with better ambiance.

Pratap K, a businessman and an ardent movie fan, prefers to watch a movie in a multiplex, primarily because of the better sound system, better seating arrangement, eatery services and clean toilets.

Jahnabi B, a corporate communications executive says, she would prefer to go to a multiplex because she can do online booking and has a lot of choices of the class she wants.

This week’s scan of Bengaluru’s Kannada dailies includes reports on the BBMP’s stand-in commissioner keeping employees on their feet and RTI-filing citizens being prevented from entering Vidhana Soudha.

As the issue of bloated voter rolls looms at large in Bengaluru, Citizen Matters finds that in neighbouring Tamil Nadu, an annual door-to-door survey has helped clean up the rolls and in turn increase voter turnout.

While there is no review or clarity on how much of the 2019 Budget got implemented in the year that went by, Bengaluru got a similar amount of money in the 2020 Budget for programmes that are a continuation of the previous ones.