“We were planning a trap for a tiger, waited for it and later realised that it was sitting atop a tree behind, watching us intently all the while.” You may think this is a wildlife expert recounting his experience in the deep jungles. Not exactly. Dr Sujay, a senior vet at Bannerghata Biological Park, popularly known as the Bannerghata Zoo, has some fascinating stories of the animals in his care. 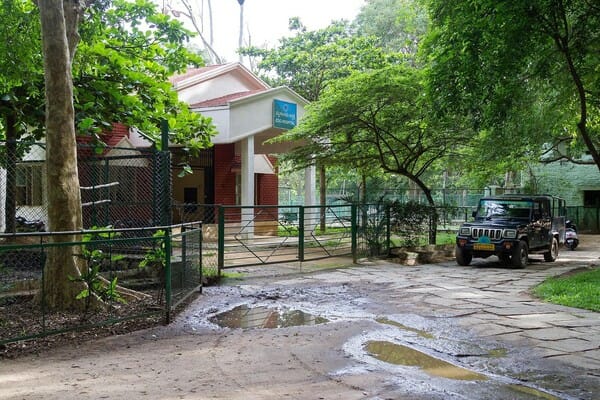 The Bannerghata National Park became an independent establishment in 2002. It includes the Zoo, Animal Safari, Butterfly Park and Rescue Center. The Bannerghata zoo is a popular weekend visit, and children and adults alike visit it for a fun day out. But zoos play an even more important role, of helping the public learn about wildlife and conservation.

The people who make it possible are the zoo staff – the veterinarians and animal keepers. The almost invisible army operates round the clock to ensure a smooth functioning of the park – that the animals are taken well care of, and the public learns something new, and takes back memories of an enjoyable time. 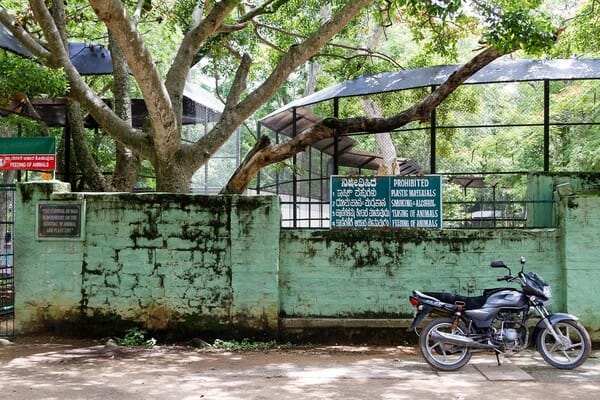 Two veterinarians reside inside the zoo quarters and the others live closeby. In a field that is quite challenging and not so financially rewarding, these doctors are driven by their passion. These doctors shared their unforgettable experiences as practitioners. One thing that was evident was their genuine love and passion for these animals they are taking care of. 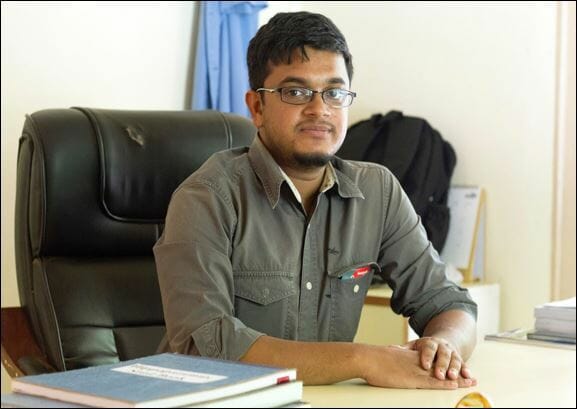 We were planning a trap for a tiger, waited for it and later realised that it was sitting atop a tree behind, watching us intently all the while.”

Dr. Sujay’s love for nature and wildlife began when his dad, who was a professor in biology used to take him on nature trips. He shares his experiences in the wild, tranquillising wild animals and leaving them back in the forests.

Tranquillisation is challenging as the legs/arms of the animals have to be targeted where there is more muscle mass. If missed, the shot is as deadly as a bullet. He shares one instance, when he literally had to run away from a mad elephant that was further enraged because of the tranquilliser, “The effect of the tranquilliser starts to develop only after fifteen minutes. To be away from the animal in this sedation period is paramount for safety of oneself.”

Yet another time, Sujay was planning to capture and confine a tiger to a fenced enclosure. The tiger never turned up and only later he realised that the tiger was watching them all the while, as they were planning the bait. “The experience was chilling”, he adds.

Under his supervision, the BBP boasts of housing one of the oldest surviving tigers in the world, Seetha. She once hurt herself in a trap kept for wild boars. The zoo hospital treated and nurtured her and she will soon enter the Guinness Book of Records as the oldest living tiger!

There is rampant littering in the premises of the zoo. Photography enthusiasts use flash excessively that disturb these animals. The public should be more particular about not disturbing the sanctity of the place and the creatures here. 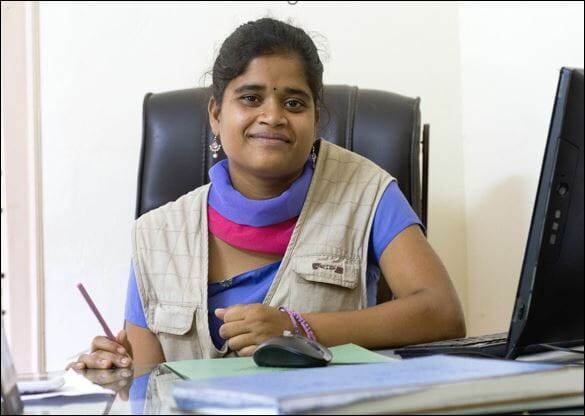 “While treating lions, the protective cage opened suddenly. The lions could have hurt me. An intern watching this fainted. Luckily, I escaped.”

The zoo is a second home to Dr Nirupama. She stays in the quarters and is always on her feet to treat the animals. She has been at Bannerghatta for six years now and each day is a new day for her. She is fond of the big cats.

Once she was treating two lions and the protective cage opened suddenly. In a very close encounter with the lions that could have cost her her life, she did not panic. One intern nearby fainted on the spot. She said, “I did not panic at the moment. I had to remain calm and composed.”

The unperturbed lions spared her. She added, “every day is a new learning for me. We have to learn from our mistakes and make sure not to repeat them again.”

She also mentioned another incident about Kasthuri, a tiger that was eating its own tail. She had to keep amputating the length of the tail to stop her. All the while Kasthuri was irritated and angry at her. Over a period of time, with her persistence in showering abundant love, Dr Nirupama managed to make friends with her. She added, “Whenever I visit her at the Rescue Centre division of the park, she comes, sits near me and we talk. We talk to the animals. They talk back. One needs some compassion to understand the relationship”, she ended.

Feeding of animals upsets their appetite and puts them in depression. It is sad that even educated people feed the Zoo animals. 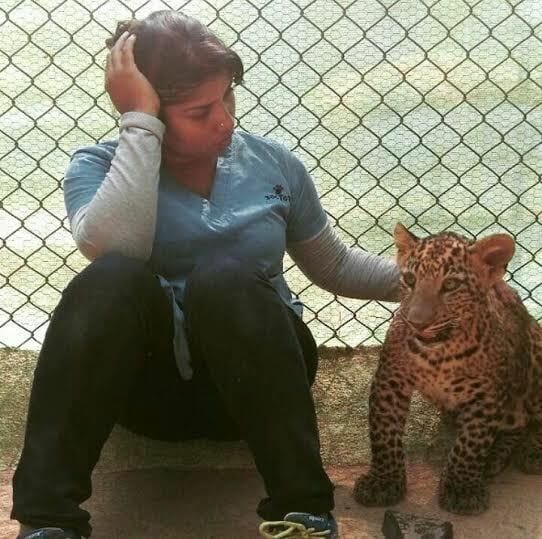 “The leopard I treat, gets irritated for a few minutes, but then starts to respond to my affection. Animals reciprocate what you show them, love or hatred. “

Dr. Nikitha is an avid lover of reptiles. Crocodiles are her favourite at the zoo. A nature lover since childhood, she decided to become a veterinarian. She worked in the Nagpur Jungle and the Pune Zoo before BBP.

“Currently, I am treating a leopard. I treat her eyes four times a day in a squeeze cage. Every time I get close to her, she gets irritated for the first five minutes. She then forgives me, responds to my love and reciprocates. Animals pick cues from the body language of people around them and behave accordingly. The more you are kind and loving towards them, the more they will reciprocate the love you show them”, she said.

People tease the animals in these enclosed spaces. They throw small stones at these creatures for their own entertainment and pleasure. Teasing is not restricted to children as adults too engage in this kind of a behaviour, many a times. 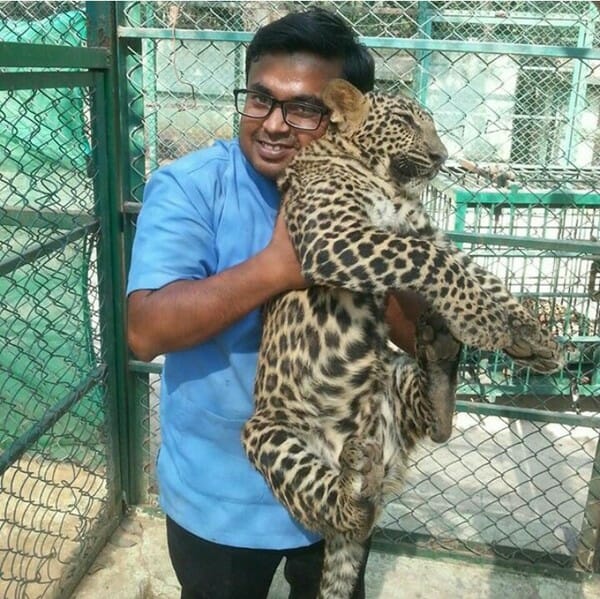 “We hide tablets inside rice balls to treat sick elephants. The intelligent ones would sniff and crush the rice balls and check for tablets before eating. Their intelligence is unmatched. “

Dr Puneeth Gowda though never actually planned to become a veterinarian now holds a PhD in Wildlife Diagnostics. He recollects the experience of monitoring a rare white tiger that gave birth to four cubs. Of the four cubs that were born, two cubs died soon enough. The responsibility of taking care of the mother and the remaining cubs was in his hands. He reminisces calling the caretakers regularly at night, making impromptu visits at wee hours and doing everything he could to ensure the well being of the cubs. Now, the hale and healthy cubs are four months old which he is really proud and happy about.

He also used to treat sick elephants by hiding tablets inside rice balls that were fed to them. “The intelligent elephants would sniff and crush the rice balls to check for tablets, if any”, he chuckled.

One main purpose of establishments of zoo is education and creating awareness. The zoo is an encyclopaedia in itself. I personally have seen parents wrongly educating their children about the names and species of animals. For example, leopards are mistaken for cheetahs and different species of monkeys are referred to as monkeys than by their specific names. 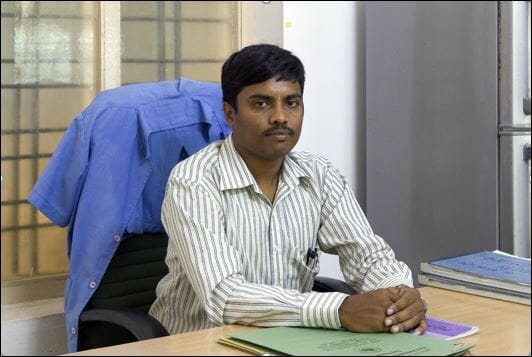 “I was studying the behaviour of a leopard for a year and a half. Finally, when it was captured and released into captivity, I was terribly upset that I had to part with the animal.”

Kushal is the only biologist at the Zoo. After speaking to some senior biologists at Bangalore Science Forum when he was in his teens, he decided to become a biologist. After years of volunteering, he is now at Bannerghatta, observing and understanding the behaviour of the animals. His duties include maintaining a family tree of different species of animals, checking their capabilities to reproduce, looking for symptoms of mental illness in animals, etc.

The observed symptoms are discussed with other doctors, caretakers and higher authorities to come to a conclusion on what the issue really is. Accordingly, the animals are treated.

Reminiscing a memorable experience, he mentioned, “while as a volunteer, I was observing a tiger for 1.5 years to understand its behaviour. Then it was captured and released into captivity. Parting from the animal made me terribly sad. In this profession, one really needs to maintain a balance between affection shown to the animals and the work that has to be done. The affection should not come in the way of duty.”

The animals in enclosed spaces are prone to get depressed. Any behaviour that would disturb these animals, should be avoided by the public.

The Assistant Director mentioned that the Zoo is in dire need of Volunteers who can spend quality time for the development of the zoo. People who are interested in volunteering can get the forms from the Bannerghatta Zoo hospital.

No sunlight? You can still grow plants!

Money plant is not the only plant that you can grow in shade. Lettuce and spinach grow too.

Once an Anglo-Indian village, now an upmarket suburb

Whitefield’s history dates back to 1882 when David Emmanuel Starkenburgh White decided to set up ‘a self sufficient Anglo-Indian village’.