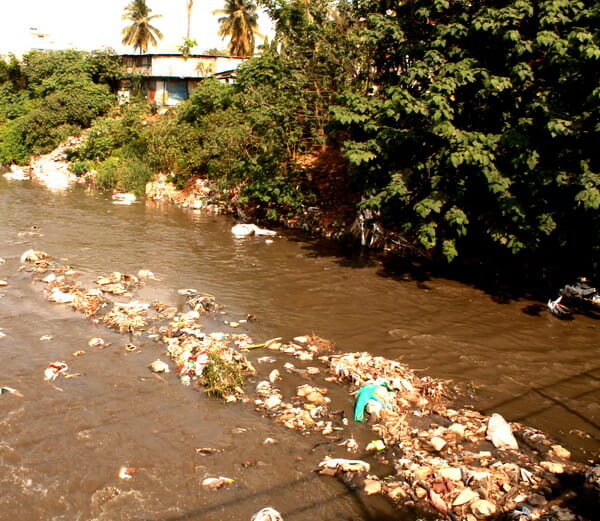 Drain at Nayandahalli where e-waste rejects are disposed of. Pic: Varsha Parashivamurthy

The scene at the Nayandahalli near Vrishabhavathi, the river that carries the sewage from the city of Bengaluru, is truly a sight to behold—white froth billows out of the surface of the water. The stench emanating from the sewage is unbearable.

This is also the place where some of the e-waste collected by the municipality attains nirvana. Batteries, CDs, spare parts of cell phones, broken television sets, tube lights, old radio devices, outdated music systems—this is the final destination for all such waste.

An informal sector is at work at Nayandahalli every day, to remove materials of value from the e-waste. Without much consideration for legalities, they make their living out of this waste.

Ramesh (name changed) carries 20-50 kilos of waste every week to Nayandahalli from different parts of the city like Banashankari, Vijay Nagar, Nagarbhavi etc. He says that the cathode ray tubes (CRT) in older televisions and computer monitors contain elements such as lead, barium and strontium, and that copper can be found along in printed circuit boards (PCB), while gold is used in connectors.

Many of the above elements are removed by various formal and informal processes. Hard drives and motherboards are placed in an acid bath and left until fully dissolved. Additional chemicals are added to the solution to precipitate gold or other precious metals. The solid gold is then recovered and sold, or dissolved again to increase the purity.

In some cases, informal methods adopted include burning of the waste. “E-waste like CDs, floppies and CFLs do not fetch us anything. They are of no use to us, so we just burn it,” says Ramesh. He adds that molten metals like lead and toxics like cyanide, which are byproducts of the extraction process, are let into drainage in Nayandahalli which ultimately joins Vrushabhavathi river. 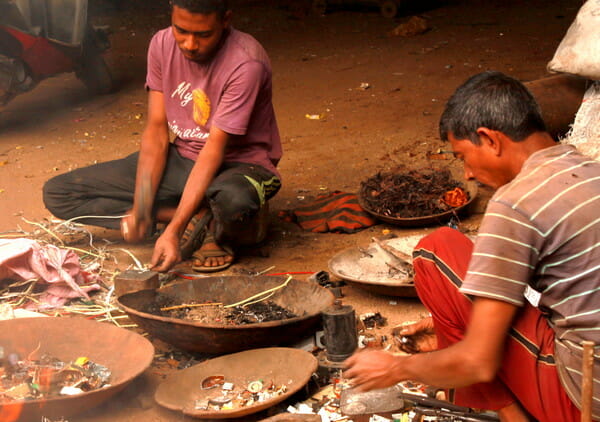 Mohammad and Salim (name changed) run a scrap dealing shop in Chickpet. The duo extracts copper from wires. They say they peel around 50 to 60 metres of wire everyday with their bare hands, to remove copper. “From the little we earn everyday, we cannot afford to buy a pair of gloves or a mask. The owner of the shop too is least bothered, because we are just labourers,” says Salim.

The process of recycling by informal recyclers is almost always done without any precautions, says Meenakshi, Communication Coordinator at Saahas, an NGO that works with generators of waste to implement best practices in waste management. She adds that the recyclers usually suffer from respiratory diseases as they inhale the toxics which are released during the processing.

KSPCB Chairman, Vaman Acharya is aware of the situation. He says: “Scrap dealers often just burn components in the open, which is hazardous to their health. They dump what they cannot extract, in drains or along with garbage. This can seep into the ground and pollute the groundwater.”

However, there is no inspection done regularly by anyone. White collar officials stay away from the area, because the place just repels them. 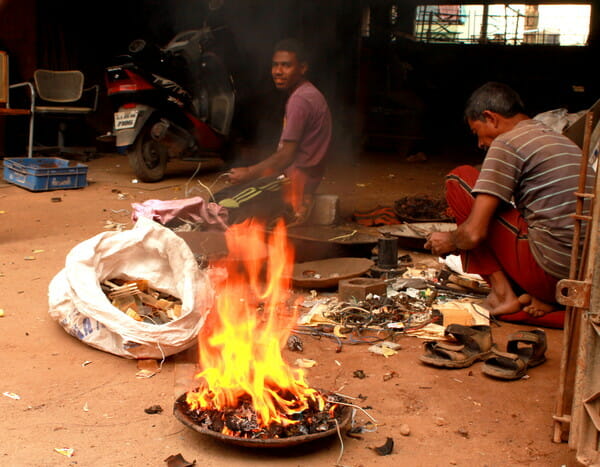 Improper handling of e-waste is prevalent across all segments — from disposers to raddiwalas and kabadiwalas, to the scrap yards in different parts of the city. Handling of e-waste in an informal way is not only dangerous to the informal recyclers, but also pollutes the environment.

“The blame cannot be put on informal and unauthorised recyclers because it is a (matter of) survival for them, their livelihood depends on the revenue they generate out of this trade,” says Kabir Arora (Khan), National Coordinator of Alliance of Indian Waste Pickers, associated with Hasiru Dala, an NGO working in the field of waste processing and resource recovery.

“We need to identify all the raddiwalas and kabadiwalas in the city and educate them about the hazardous effects of informal recycling”, says Divya Tiwari, Program Head at Saahas. “After identifying the informal recyclers, we need to upgrade their recycling skills and channelise them to authorised organisations,” adds Kabir.

“Merely calling out that this is illegal, or even hazardous, is not going to solve the issue. We have to get them on board and make them a part of the system,” says Acharya.

According to a report by the Association of Chamber of Commerce and Industry in India (Assocham), Bengaluru produces around 20,000 tonnes of e-waste every year. This figure is rising at an alarming rate of 20% per year.

Apart from the burgeoning tech industry that definitely contributes to the increase in e-waste, households too generate a significant portion of e-waste. Achitra Borgohain, Founder and CEO of BinBag, a start up incubated in IIMB, a company that collects and recycles e-waste, estimates that a middle income household generates 25 kg of e-waste yearly. While Hasirudala claims that the quantity of household e-waste generated is unknown, Vaman Acharya says there is no mechanism to measure the amount of e-waste generated in the city. 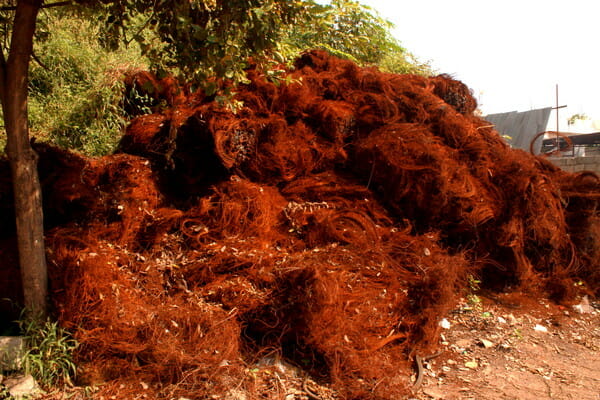 How should e-waste be handled according to rules?

According to a 2011 Rajya Sabha report on e-waste, Gowripalya and Nayandahalli are the recycling capitals for e-waste in Bengaluru. Formal recycling centres in Karnataka include organisations like e-Ward, e-Parisaraa, KG Nandini Recyclers, Ash Recyclers, NCS Global and E-R3 Solutions.

The same report also puts down the conditions for handling e-waste:

Though these rules exist on paper, they are not always implemented. While recycling of e-waste continues to be a multi-crore market, the processes followed in handling the waste is not according to rule books.

How much e-waste is disposed in a wrong way?

A survey conducted by e-Parisaraa states that only 10% of e-waste reached authorised recyclers; the remaining 90% may reach informal recyclers or just get burnt. Kabir adds that not only scrap dealers, but also second-hand electronic equipment dealers, waste pickers and others, hand over e-waste to the informal sector.

E-waste is likely to be disposed of in the wrong manner for two reasons—when the collection centres are far away or when people do not know what to do with it. The quantity from individual houses is very less, as a result of which it often gets mixed up with dry waste, and either reaches landfills or into the hands of waste pickers, and from thereon, the informal recycling sector.

Most of the e-waste that reaches informal or formal sector are components from phones, computer sets and other electronic gadgets. Where then, do bulbs, tube lights and CFLs go? 95% of this type of waste does not reach the formal recyclers, says Achitra Borgohain.

E-waste (Management & Handling) Rules 2011 notified by the government defines e-waste as electrical and electronic equipment which is dependent on electric current or electromagnetic fields, discarded entirely or in parts. CFLs are supposed to be considered as e-waste, but the KSPCB rules have no mention about CFL lights or the handling of mercury. This is why such waste has no responsible takers, and ends up getting burnt, releasing toxic fumes into the atmosphere.

Unless the city gets a proper e-waste recycling policy and systems in place, the mess will only continue and accumulate. What responsible citizens can do in the meantime, is ensure that the e-waste that they generate, makes its way to the formal sector, and is being disposed of in the right manner.

Bright but toxic: The CFL bulbs that Bengaluru is unable to handle
What happens to non-vegetarian waste generated in Bengaluru?

Newly elected Mayor and the Deputy Mayor spell out their plans for the city. But do they have the capability and powers to execute these plans or will they be the yes men for the state government?

HSR’s composting plant back to square one, no solution in sight

Karnataka Composting Development Corporation (KCDC) is back to its old status, and the deadlock continues. Akshatha M traces a month’s journey of the plant, through her interactions with concerned key parties.