It works! It works! All ye skeptics, listen to this story. I am sure there are many more similar initiatives around the city, but this one I have personal experience of, having watched at close quarters, the week long-effort to bring a little smile to the face of namma ooru.

On Saturday, February 3, the Ugly Indian, a group of volunteers trying to clean up Bengaluru’s streets, gathered at what used to be a long stretch of five vacant sites across the road from ISRO head office’s east side wall in Sanjay Nagar, and set to work. This used to be a huge, really huge, garbage dump, stinking, and an eye sore, with even BBMP’s pourakarmikas bringing rubbish from around the area and dumping it here along with headless corpse of a dog on top of the heap.

Civic activists living in the vicinity tried to stop people from throwing garbage here, a CCTV was also installed, with a warning that those caught dumping rubbish will be prosecuted. It didn’t help. Men riding two-wheelers driving to the far edge of the road to escape the camera, and fling plastic bags of  garbage on to the heap. Even the local corporator, who was invited to a residents’ welfare group meeting, conceded plaintively that there was not much one could do about the garbage mafia. This was one of the hundreds of “black spots” in the city.

On this eventful Saturday morning, somehow it all clicked. ‘Enough is enough’, said the locals, volunteers young and old, men and women, pitched in to lend a hand, even BBMP sent some cleaners to clean up the place, donations were collected to buy paint and brushes and aprons, and walls along the stretch were painted bright blue and yellow. Plants were put in; the place looked unrecognisable. By evening, the long stretch of a few hundred meters of five vacant sites was ready, for use as a nice playground for residents of the layout.

Here are the images of the work that went into it. (Image courtesy: The Ugly Indian) 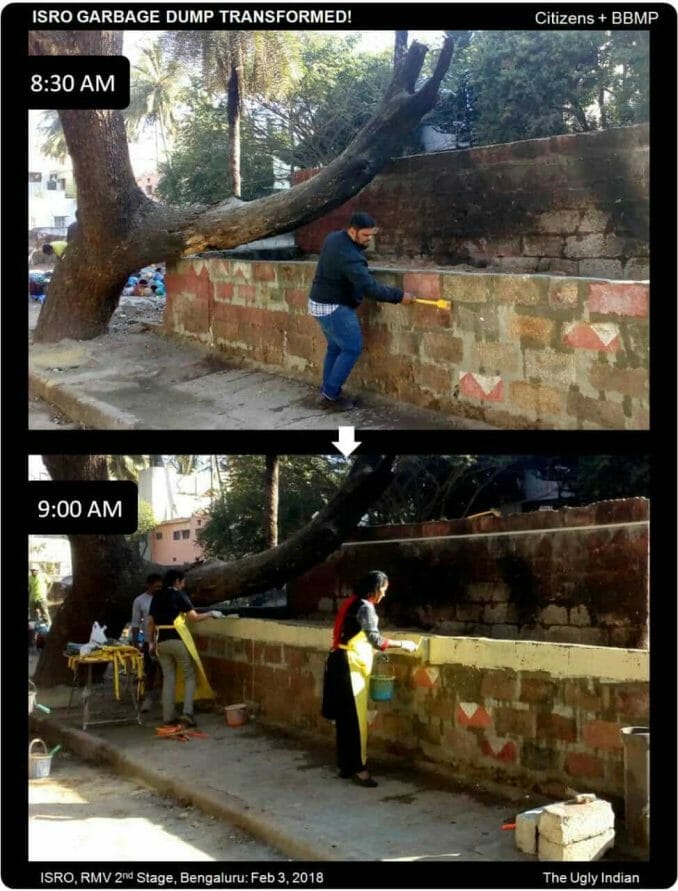 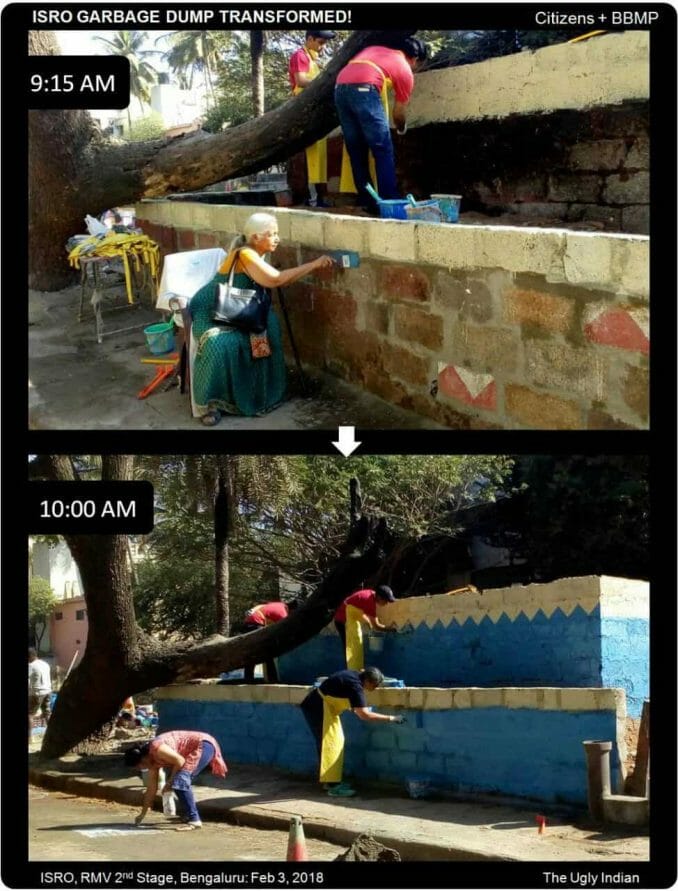 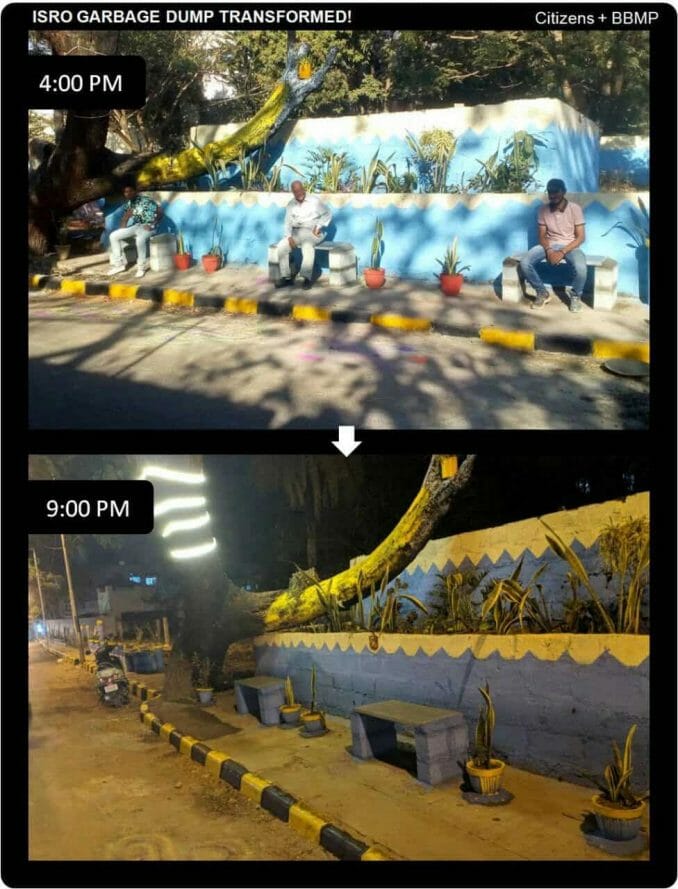 But will it stay that way? That was the question many of us were raising.

But it has worked – because of follow up action by volunteers. Instead of the huge mounds of kitchen waste and other rubbish that eateries along BEL road were dumping here, now thanks to vigilance and public support, only a few household garbage bags were being thrown, especially after dark.

A get-together under the stars

So the Ugly Indian group came up with the idea of having a 9 pm to midnight get-together on Saturday 10th, to spread the message and stop night-time throwers.

Police permission was taken to block that short stretch of road at both ends, from 9 pm to midnight. And  groups of children started congregating. A three-year-old merrily skated along the road, another toddler tried her hand at hopscotch, enjoying herself immensely, jumping from one square to another. These kids probably live in apartment blocks and never have this kind of free space to stretch their legs or play games.

Two older school kids stretched an improvised net across the road and played badminton. Two kids rode their toy scooters with abandon. There was a group tossing a frisbee around and having fun. Someone strung an old tyre on a tree branch, and girls used it as a swing, enjoying themselves thoroughly. Boys brought a football and kicked it around with abandon, reclaiming not only common space but also a part of their own childhood….

Someone brought a boom box and played music. Older residents – including some seniors and grey haired ‘ajjis’  and ajjas  — began to shake a leg — to Ghoomar and old film hits  – many youngsters started jiving. It was all such infectious fun that it was difficult not to get drawn in. It was not just fun, it was therapy, no less, with the cool night air blowing.

Volunteers had strung up some lights on the trees, to give the event a festive air. Residents from the nearby IISc Vignanapura campus also turned up, with children. By 10 pm, there were around 150 people, ranging in age from 2 to 82. At least one old person, walking with a stick, who had planned to stay for an hour and return home around 10, refused to leave and stayed on till midnight.

The icing on the cake was the presence of the BBMP commissioner himself. (Thank you, sir, that was a great gesture and a tremendous encouragement) to the volunteers!). He not only came to watch but also joined in the games, lending a hand with the tug of war. Photographer went to work, and a great time was had by all.

As midnight struck, someone pulled out a flute and played a solemn Vande Maataram. The crowd listened in pin drop silence before clapping and dispersing. The consensus was that this should be made a regular monthly event, on Saturday nights.

With people What used to be a garbage heap has become a leveled play area, and a venue for the community to come together, (a few stone seats have also been thoughtfully installed.)  discuss, plan, and in general take responsibility for keeping their own environs garbage-free. For potential garbage throwers, this ‘fun way’ was a more potent message than mere warnings or CCTV cameras.

The take-aways are many – building a sense of community, making friends, giving kids space to enjoy games, besides of course, getting rid of garbage. Enthused by this effort, ISRO has now planned to do the same with another blackspot a short distance away, outside the Raj Mahal High school as part of its Corporate Social Responsibility (CSR) effort.

This is something citizens’ groups can replicate all over the city. That’s the only way – after all, as the world’s most famous consumer activist Ralph Nader has said, we need to focus not merely on our rights, but also on responsibilities. Garbage comes from us the residents —  so if each one of us lent a hand in keeping the city clean, we can have a beautiful ooru. Sanjaynagar and the Ugly Indian group have shown that it is possible.

In brazen defiance of law, advertisers put up illegal hoardings across the city, often multiple times after the authorities have torn them down. How will the BBMP deal with this menace?

Refining voter list not rocket science, needs only will power

Enfold is organising a panel discussion with experts on child safety to discuss the recommended protocols for schools as per the CPP and POCSO Act. The discussion is on November 28th.